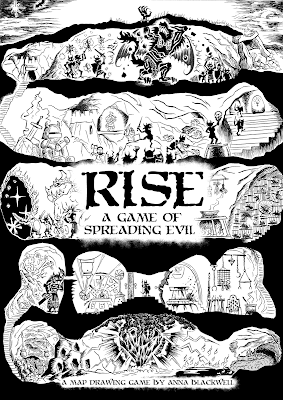 In ages past the greatest of all dungeons fell. Its great portals were penetrated by mighty heroes and level by level, its halls and corridors walked down, and its rooms and chambers, chapels and necropolises, lairs and dens, and reliquaries and treasuries entered, their denizens put to the sword and the spell, their coins, gems, and magics plundered. A millennium has passed since then and the doings of those great warriors and wizards have passed into legend and dungeons are things of the past, so perhaps it is time for a new network of tunnels and rooms, constructed and populated at the hands of a new Dungeon Keeper? Or at least the old Dungeon Keeper of old, woken after a thousand year slumber to build a dungeon anew?

This is the set-up for RISE: A Game of Spreading Evil. Published by Blackwell Games, it is a counterpart and opposite to DELVE: A Solo Map Drawing Game. Both are map-drawing games for one player and both involve the drawing and building, populating and defending, and exploring and exploiting of great underground networks. The difference is that in DELVE, the player takes the role of the Overseer of a Dwarven hold, digging down into the depths of the earth, whereas in RISE, the player takes of the role of the Keeper, tasked with building up to the surface—though is nothing to stop an enterprising Keeper from building down! In the course of this mighty construction, a Keeper will explore nearby caverns and tunnels, develop them into rooms such as chambers and hovels in which recruited troops can have their lair, forges which enable traps to be built elsewhere in the dungeon, a mason to allow the construction of secret passages and barricades, prisons in which to incarcerate captured adventurers, taverns and theatres to keep the dungeon’s denizens happy, and altars on which to sacrifice them in return for really good magic! Lastly, a Keeper might discover a portal to another realm and send forth explorers to learn its secrets and plunder its treasures.

RISE: A Game of Spreading Evil is a solo map-drawing game with tactical elements and some journaling aspects which can be played at leisure by the would be Keeper. Fairly easy to play, it can be started, put down, and picked up again because a Keeper’s dungeon never amounts to more than sheets of paper and perhaps a notebook. It requires a good pencil, a rubber, several sheets of gridded or graph paper, a notepad, some tokens, and a standard deck of playing cards. Each turn, beginning from the Dungeon Heart, as the Keeper the player will draw a card from the playing deck, and draw what it indicates on their map; resolve any combat; exchange Resources for Trade Goods or vice versa; build new features like rooms, traps, and barricades; and recruit new Units. Only one room can be built per turn. In addition, the Keeper must keep track of the dungeon’s Happiness, keeping it high enough to avoid its denizens from mutinying and turning on the Keeper!

The suit of the card drawn determines what the Keeper’s excavation teams have discovered. Clubs are Remnants, Diamonds are Trade Goods, Hearts are Resources, and Spades are Natural Formations. The depth or level of the discovery will determine the amount of Resources or Trade Goods found, whilst the number on Clubs or Spades card indicates the result on the Remnants or Natural Formations tables. In the case of the Hearts or Diamonds result, the Keeper can draw an empty cave on the map to represent the discovery, whilst with a Clubs or Spades card, the Keeper refers to the result from the relevant table and then draws that on the map. When building a Room, the Overseer pays the listed cost and either adds it to an empty space or builds it into an already discovered cavern. Each Room provides a particular benefit. For example, the Hovel serves as a basic lair and can house some ten units’ worth of troops, whereas a Puzzle Room is intentionally designed to slow any combatant—whether having descended from the surface or mutinied from amongst the Keeper’s own troops—down from one turn to the next. Others like the Theatre or the Casino enhance a dungeon’s Happiness, and some provide buffs, such as the Kitchen, which increases the fighting Strength of nearby troops with a ready supply of good unwholesome food, and Treasury, which increases the maximum amount of Trade Goods the Keeper can store.

If a Keeper builds an Altar, then sacrifices can be made to gain Good Magic. This might be to summon a spell which brings a room to life and turns it into a unit of its own or helpful whispers flit about the dungeon and cause any imprisoned Adventurers to switch sides and enlist in the service of the Keeper!* Another potential Good Magic is a portal. Once a portal has been discovered, the Keeper must construct a Portal Siege Camp if the aim is to launch raids through the portal and into other Realms. Successful raids will return further Resources and Trade Goods, as well as captured Units and even stolen items and artefacts. The latter is best stored in their dungeon’s Thieves’ Gallery.

* This quicker than the other option, which is sending the Adventurers to the Torture Chamber—should the Dungeon have one—and from there to the Hiring Office, and probably involves less paperwork. It is also probably less fun for one of the parties involved.

Combat occurs when a Keeper discovers the presence of the enemy, represented by a Remnant being drawn at the start of turn, such as an Adventuring party or a powerful champion who tests the Keeper’s forces. It can also occur when a Keeper’s own units become unhappy and mutiny, turning on their former master—or mistress, fighting their way to the Dungeon Heart. If the enemy or mutinied units cannot do this, then they will dig in and begin taking over a section of the dungeon. This will present a further challenge to the Keeper in addition to expanding the Dungeon from the depths to the surface. Combat is a matter of attrition, comparing the Strength values of the combatants and deducting the lower Strength value from the higher Strength value. A Unit whose Strength is reduced to zero is removed from the Dungeon. The rules allow for Ranged combat, such as from Archers and Warlocks, whilst Cultists can cast a protective shield and Trappers can reset or disarm traps.

In addition to launching raids into other Realms via Portals, RISE gives tables for Adventurers to be encountered, Information to be found, Legendary artefacts to be discovered—once the Joker cards have been added back to the deck with the Keeper’s expansion reaching the fifth level, gratuitously great Heroes who take it upon themselves to delve deeper and deeper into the depths of the Keeper’s Dungeon, and options such as World Layers. The latter are themed levels of the Dungeon, like a Primordial Layer populated by gigantic reptiles, lava flows, and ancient megaliths. These add flavour and serve as a feature in the Keeper’s Dungeon. Lastly, RISE comes with a set of challenges which can be attempted over the course of multiple playthroughs of the game.

What is not quite clear is what the end objective of playing RISE: A Game of Spreading Evil actually is. The aim is to explore and develop up from the depths, ultimately to reach the surface, and perhaps from there, become a true threat to the world beyond. Yet there is barely the need for such an objective, or even a sense of having won in playing RISE. This is a game whose point is twofold. There is, of course, the play, the intentionally procedural construction of the Dungeon and its development, but there is also the story of the Dungeon to be told in that constructive play. As with DELVE: A Solo Map Drawing Game, what develops out of the play of RISE: A Game of Spreading Evil is a map of the Dungeon, level by level in cross section; when combined with the notes kept in the journal, a story that tells of the Dungeon’s development, history, and notable features; and ultimately, a Dungeon complete with notes and map that the Keeper can take, and as Dungeon Master, could be run as a dungeon for a group of players. Perhaps for Dungeons & Dragons, perhaps for another roleplaying game.

Physically, RISE: A Game of Spreading Evil is a cleanly presented, digest-sized book. The writing is clear and simple such that the reader can become a Keeper and start digging and drawing with very little preparation.

One of the given inspirations for RISE’s sister game, DELVE: A Solo Map Drawing Game is the computer game, Dungeon Keeper, and the same can be said for RISE—if not more so. It is played at a much more sedate pace than the computer game, with the player as the Keeper handling all of the procedural and resource management elements. Of the two, DELVE: A Solo Map Drawing Game is the more polished and deeper affair, RISE: A Game of Spreading Evil being a little rougher around the edges and not being quite as well explained as it could be. Nevertheless, RISE shares much in common with DELVE. It can be played in one sitting or put aside and returned to at a later date, but it does take time to play and the more time the Keeper invests in the play, the more rewarding the story which should develop and the more interesting the Dungeon created—and ultimately, RISE: A Game of Spreading Evil is about the story of Dungeon.