Jonstown Jottings #47: GLORANTHA: A Trek in the Marsh 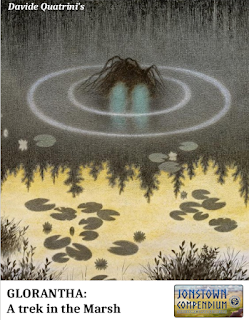 What is it?
GLORANTHA: A Trek in the Marsh is a scenario for use with RuneQuest: Roleplaying in Glorantha.
It is a four page, full colour, 963.55 KB PDF.
The layout is clean and clean. It is art free, but the cartography is reasonable.
Where is it set?
GLORANTHA: The search for the Throne of Colymar is set in Sartar in the Upland Marsh.

Who do you play?
Player Characters of all types could play this scenario, but is best suited to members of a nearby Colymar tribe or Ducks. Humakti will, of course, relish the opportunity to curb the influence of Delecti the Necromancer.

What do you need?
GLORANTHA: A Trek in the Marsh requires RuneQuest: Roleplaying in Glorantha and the Glorantha Bestiary. The later is a necessity as no stats or creature or monster write-ups are included.
What do you get?
GLORANTHA: A Trek in the Marsh is set on the northern edge of the Upland Marsh and presents an opportunity for a nearby tribe to reduce the great swamp’s boundaries and reclaim land lost centuries ago to the magics of Delecti the Necromancer. One of the magical rods which enforces his malign influence has been located and the local tribal chief thinks it can be removed or destroyed and so sends some trusted adventurers to deal with it.
Consisting of really only two pages, the adventure is linear, the Player Characters proceeding rom the edge of the map straight to the location of the magical rod, perhaps having an encounter or two on the way to the marsh—depending upon if they veer slightly left or slightly right. These encounters, as are the majority of the encounters in the scenario, all combat based. No NPCs are encountered or detailed in the course of the adventure. No encounter, even the encounter with the altered Dancer in the Darkness which protects the rod is accorded more than three sentences.
GLORANTHA: A Trek in the Marsh is not badly written, but very much like the earlier GLORANTHA: The search for the Throne of Colymar, it is underwritten and underdeveloped. As presented it is not a whole scenario, but rather the middle of a scenario. Despite the fact that the Player Characters are on a quest to destroy or remove a magical artefact, the artefact itself is not detailed or illustrated, and there is no information as to how the local tribal chief learned of the location of the artefact, how the artefact is removed, and what happens once the artefact is removed. In addition, the protector of is described as a combination of a Darkness
elemental and a Dancer in Darkness, but stats or abilities are given, leaving the Game master to develop these herself without guidance. Omitting the stats for monsters and creatures which can be found in the Glorantha Bestiary is not wholly unreasonable, as the Game Master can easily provide these, but not providing the stats or write-up of a new combination of monster is simply nonsensical.
Similarly, the lack of set-up and consequences for the scenario, leaves the Game Master with more work than should have been necessary. The author need not have tied either to a specific tribe, but with sufficient background, the Game Master could easily have tied in both set-up and consequences to the tribe of her choice. Instead, the author leaves all of the development work to the Game Master rather than some of it.
Is it worth your time?
Yes—GLORANTHA: A Trek in the Marsh contains the germ of an interesting scenario if the Game Master is willing to completely develop its set-up and consequences which its author failed to do.
No—GLORANTHA: A Trek in the Marsh is a third of a scenario, no more than a series of combat encounters, in need of development in the beginning, middle, and end. Cheap, but avoidable.
Maybe—GLORANTHA: A Trek in the Marsh contains the germ of an interesting scenario if the Game Master is a running a campaign in and around the Upland Marsh, and is willing to completely develop its set-up and consequences which its author failed to do.
Posted by pookie at 12:00