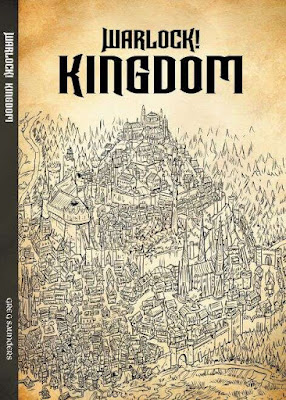 Warlock! Kingdom is a supplement for Warlock!, “A Game Inspired By The Early Days Of British Tabletop Gaming”, in particular, Warhammer Fantasy Roleplay and Maelstrom as well as the Fighting Fantasy solo adventure books which began with The Warlock of Firetop Mountain. It has Careers—Careers such as Agitator, Boatman, Grave Robber, and Rat Catcher; it has two attributes, one of which is Luck; and it has a Warlock! running around an unnamed, humancentric kingdom causing mayhem. Although mechanically much lighter than Warhammer Fantasy Roleplay, it is nevertheless intended to be grim and gritty, a world of adventure and peril, but with mud aplenty—or worse—underfoot and a certain, sardonic sense of humour. However, beyond there being a marauding Warlock!, and gods, such as the beloved Thrice Blessed, the bloody Red King, and the reviled Dragon, there is unfortunately very little in terms of background in Warlock!. This is an omission that Warlock! Kingdom aims to rectify.

Warlock! Kingdom is published by Fire Ruby Designs and is very much a book of two halves. The first is a Gazetteer of the Evening Lands, which provides an overview and entails of the western part of the Kingdom, whilst the second is a guide to Grim Biskerstaf, a thriving port city on the mighty river Vessen. Both sections are for the most part systemless, so that a Game Master could easily take the descriptions and content found here and adapt to the roleplaying game of her choice, be it Dungeons & Dragons, Warhammer Fantasy Roleplay, Zweihander: Grim and Perilous, or something else.

Warlock! Kingdom opens up with the ‘Kingdom Gazetteer’, which details the Kingdom, which feels fairly generic in its fantasy. It has great forests, mighty mountain ranges, rolling hills, broad meandering rivers, deep lakes, busy cities and towns with wide swathes of untamed wilderness in between, the settled areas populated by Humans, but also Dwarves, Elves, and Halflings. It stands on a peninsula, though this is not described. After this description, the book seems to go awry with a table of cultural events for the Player Characters to encounter and involve themselves in. It is a really good list, ranging from harvest festival to a funeral to dancing bear to Gerarix Stonecast with a mutated uman to exhibit, but feels too early in the book when you really want to know particular details of the country—languages, religion, and whatnot. Similarly, the discussion of the Royal Family and the Traitor, the latter the former chamberlain to the King whose worship of the demon Delock would lead to an unleashing of dark forces and precipitated a war that nearly shattered the kingdom. And also the fact that since the war against the Traitor, the King himself has not been seen, and that it appears that his wife the Queen and the King’s chief advisor are in charge given his absence. No suggestions are made as to why the King is missing or why, so there is plenty of room there to speculate—both in game and out.

Fortunately, Warlock! Kingdom settles down after that and guides the reader around the Evening Lands. This focuses on particular geographical locations like the Black Spine Mountains and the Golden Cave, the former riddled with caves and tunnels that are home to tribes of Goblins and clans of Dwarves, the latter a site of pilgrimage to the martyr, Saint Agarix, the current priest of which at the cave is probably living off the proceeds from the pilgrims’ donations. Many of these various location descriptions are accompanied by a table of random elements. Thus for the battlefield of Pomperburg, where the largest battle against the Traitor took place and which remains a place of horror to this day, there is a list of unusual items to be found on the site still. Not every location has such a table, but in each, they add a little bit of extra flavour and detail.

The bulk of Warlock! Kingdom—almost two thirds, in fact—is devoted to Grim Biskerstaf, a city on the kingdom’s south coast at the mouth of the Vessen River. In the wake of the war with the Traitor, though thriving, the city is in decline, its ruler, Lord Kelberond ineffectual and perpetually confused; the city guard forced to operate on a shoestring budget whilst the Peacock Guard, whose members protect Lord Kelberond, strut about the city as if they own it; the harbour the site of ongoing squabbles and fights between the Fish Speakers and the Dockers as to who controls trade on the river; and religious dissension growing as the Red King’s Men, worshippers of the Red King ejected from Fesselburg, the Kingdom’s capital, have taken up residence in the city—some actually devout, others little more than thugs. Then there is the Blight. This is a ghastly disease which turns the sufferer’s skin a sickly green and makes it break out into open sores. No one knows the source or cause of the Blight, but of late, the river has turned into sludge and it only affects the lower classes—so at the moment, the Blight is not all that important.

The description of Grim Biskerstaf follows the format used for the Kingdom in the first half of Warlock! Kingdom. Each of the descriptions of the city’s thirteen important locations is accompanied by two things. One is a snapshot from the main two-page illustration/map of the city, and the other is a table. Similarly, the descriptions of the city’s various organisations and notable figures are also accompanied by their own tables, which in each case adds further detail and flavour. Thus, outside the cathedral to the Thrice Blessed stands a tree and on that tree—in very Warhammer Fantasy Roleplay fashion—are nailed notices of employment described in a pair of tables, whilst along the city’s famous red stone walls, built by an Elven queen a millennium ago, stand a series of great towers, many of which have fallen into a state of disrepair and rumoured to have been occupied by persons other than the city guard. Who exactly occupies a particular tower can be determined by a roll of the die and reference to the accompanying table.

Grim Biskerstaf’s organisations include the Little Council, which supposedly governs the city and has table of its various plans; the College of Doors, its school of magic whose entrance changes regularly and is actually located in a hidden magical dimension, and its table suggests where the entrance door may be found that week or so. Its notable citizens include the wizard, Dolkepper, who when not studying the universe, is crabbily ruminating on which of the city’s citizens has slighted him and then tetchedly complaining about it. Who exactly, of course, is detailed on the accompanying table. In addition to the table, all of the descriptions are full of detail and flavour that the Game Master can bring to her game.
Rounding out Warlock! Kingdom is ‘So, You’re a Local?’, which gives a sextet of new Careers for Grim Biskerstaf. These are Docker, Fish Warden, Mudlark, Night Watchman, Publican, and Servant, but to be fair would work in almost any port city or town. Alternatively, they could serve as the basis for Player Characters in a campaign or scenario set entirely in Grim Biskerstaf! All of these have tables answering a couple of questions such as ‘What have you found?’ or ‘What have you seen?’, which further tie them into the city. As well as potential Player Characters they could also form the basis for NPCs too. Finally in Warlock! Kingdom, there is another pair of lengthy tables. One of hirelings, the other of adventure seeds. There are no stats with the hirelings, but the adventure seeds are nicely detailed and could keep a campaign in Grim Biskerstaf going for a while.

Physically, Warlock! Kingdom is a buff little book, starkly laid out and illustrated in a suitably rough style which feels suitably in keeping with the period inspiration. The cartography is nicely done, but the book does need a tighter edit in places.

Warlock! Kingdom begins in underwhelming fashion, the description of the kingdom at least feeling underwritten before it settles down and starts telling you interesting stuff. It really picks up with the description of Grim Biskerstaf, a city full of secrets and dirt which could be dropped into any campaign, which is made all the easier because like much of the book, it is systemless. Pick it up for overview of the kingdom, but definitely stay for the write-up of the Grim Biskerstaf in Warlock! Kingdom, which is perfect for any Grim & Perilous setting or roleplaying game, not just Warlock!
Posted by pookie at 18:00