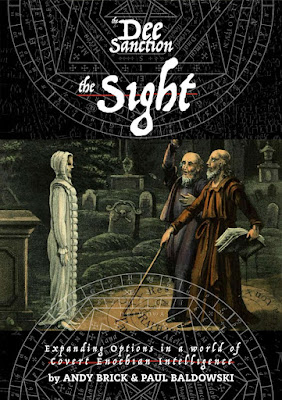 The Sight: A True & Faithful Relation of Acts of Supernatural Foresight, Uncanny Vision, divers Readings of Occult Tokens: shewing the Particulars of SOME SPIRITS is a supplement of magic for The Dee Sanction: Adventures in Covert Enochian Intelligence. Or rather The Sight is a supplement of alternative and deeper magic for The Dee Sanction. For in The Dee Sanction, all Agents of Dee have magic. For under the terms of the Act Against Conjurations, Enchantments and Witchcrafts, it permitted those with heretical knowledge to work off their sentence in service to, and in protection of, Her Majesty, Queen Elisabeth. This includes the one Favour, the very low key magical, Angelic means of influence that the Agent can bear upon the world, learnt through study of a corrupting tome or tutelage at the hands of a secret society. Theirs is a minor magic, but amongst their number, since after all, the authorities are on the constant lookout for any capable of even minor magics, there will be those capable of more—much more.

The Sight is a short supplement which introduces to four new talents—Aura Reading, Prophecy, Scrying, and Token Reading—to The Dee Sanction. It also provides guidance on visions, communing with spirits, possession, hypnosis, and the miraculous intervention of the Divine Chorus. Potentially, it increases the magical potency of the Player Characters or Agents, as well as adding a degree of uncertainty when using their magic. To determine if an Agent or indeed, an NPC, has the Sight, the supplement uses an expanded table over that given in The Dee Sanction. When a player uses the table, he either rolls larger dice types or draws from a full deck of playing cards to account for the increased number of entries. Standard rolls or number playing cards indicate that the Agent has a Favour, as in the core rules for The Dee Sanction, but here every entry has a list of three options, which the player can choose from or take all three, depending how much magic the Game Master wants her player to know.

Rolls of elven or twelve, or draws of either a Jack, Queen, or King, if using cards, determines whether has the Sight. Aura Reading enables an Agent to view and interpret someone’s supernatural aspects, Prophecy to see the future, Scrying to see things that are unseen, and Token reading to examine the lore and history bound up in objects. They are further divided into three, the die result or card determining which particular one an Agent has. For example, Prophecy includes Danger Sense, Things to Come, and Fortune Telling, whilst Scrying includes Visions, Divinations, and Summoned Advisor. There is some overlap to these, but there is every effort to make them different and feel different in play. Divination, for example, allows an Agent to experience the environment around a specific person, place, or event once a significant connection is established with them, which would require the blood or hair of the person, or an object from the location. Whereas Things to Come gives brief visions or warnings of threat, perhaps upon meeting someone, and is always involuntary.

Use of the Sight requires a player to succeed at a Supernatural Challenge. However, unlike the angelic nature of Favours, the Sight is supernatural in nature and therefore fickle. Which means that even in a player facing roleplaying such as The Dee Sanction, the Game Master gets to roll as well as the player. This elevates what would be a Supernatural Challenge in an Uncertain Challenge. The results of the use of the Sight range from Untruthful to Truthful depending upon whether the player and the Game Master both falter, one succeeds and one falters, and both succeed. The result, especially if the Agent is attempting to see the future, is only a possible future and it need not be easy to understand. In fact, it should be cryptic, and further, it should only told to the player of the Agent with the Sight, and done so in private. Further, the player should not write it down. This accentuates the uncertainty of the Sight. Inspiration for such foretellings is provided in a pair of tables.

The Sight also covers communing with spirits and talking with angels, the former answering a few questions, the latter even performing a miracle. There are rules here as well for possession and exorcism, and for both major and minor miracles. Both lend themselves to story possibilities, and of course, Enochian is the language of the angels, so it seems obvious to have talking with angels included here.

Physically, The Sight is cleanly and tidily laid out. It is lightly illustrated and consequently less obtrusive in comparison to the core rulebook.

The Sight is an excellent expansion to The Dee Sanction: Adventures in Covert Enochian Intelligence. Its rules are all entirely optional, and even if the Game Master decides not to add them to her campaign of The Dee Sanction or does not necessarily want her players’ Agents to possess them, they can remain the province of the NPCs or simply a source of ideas. However it is used, The Sight: A True & Faithful Relation of Acts of Supernatural Foresight, Uncanny Vision, divers Readings of Occult Tokens: shewing the Particulars of SOME SPIRITS still open up further story avenues and ideas as well as making the use of magic uncertain. 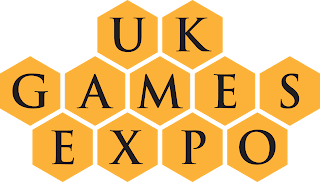 Just Crunch Games will be at UK Games Expo which takes place from Friday, June 3rd to Sunday, June 5th, 2022.
Posted by pookie at 18:00