Solitaire: You Are (Not) Deadpool 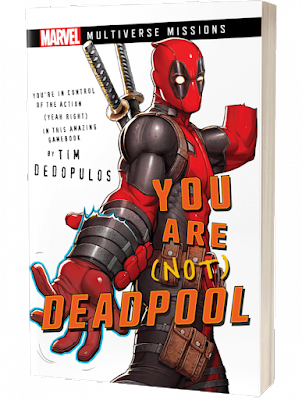 After coming to comics with You Are Deadpool, the solo adventures of the ‘Merc with a Mouth’ switches to the traditional format of text paragraphs with You Are (Not) Deadpool. This is the first entry in the ‘A Marvel: Multiverse Missions Adventure Gamebook’ series published by Aconyte Books and unlike almost every other Solo Adventure book it promises not to put you at the centre of the action. As the title suggests, you do not play as Deadpool in You Are (Not) Deadpool. Instead you are an innocent bystander approached by Deadpool who identifies you as ‘Six’ and asks you to help him. In effect, whereas you are not Deadpool, the character you play could actually be YOU THE READER if you were in New York when Deadpool bounds over to you like a happy puppy. With no mention of what happened to One, Two, Three, or Four, let alone Five, you find yourself accompanying Deadpool on his mission. For the most part he follows your suggestions, where to go, what to do, acting as both sidekick and conscience, much like his best friend, Weasel, or Dopinder the taxi driver from the film. However, there are moments where you shine and Deadpool definitely handles the fights—with relish, often his own—whilst you huddle in the corner, having rolled the dice to determine the outcome.

The plot in Deadpool in You Are (Not) Deadpool is this. Daredevil gives a Deadpool a mission. Alien guns—Chitauri guns—are flooding the city and Deadpool has to find the source and stop them. The investigation will take the pair of Deadpool and Six above, below, and across New York, meeting Bob the Hydra Agent along the way, up and down the USA’s eastern seaboard because the budget does not extend as far away as Hawaii, although it does take them somewhere else… As Six, you and Deadpool will also play the worst game of Jenga in the Marvel Universe, fight a Psychic Octopus, lie about having found a sledgehammer, and a lot more besides. They might even jump book to the next entry in the series—She-Hulk goes to Murderworld!

Mechanically, You Are (Not) Deadpool is more sophisticated than the average solo adventure book. Standard six-sided dice are required, no more than three. Deadpool has three stats—MERC, MOUTH, and FOCUS, which are to do with physical, social, and mental stuff respectively. Initially, they are rated two each with the reader increasing the value of one of them by on, but they do change over the course of the adventure. They come into play whenever you want Deadpool to take an action. This typically involves rolling a single six-sided die and adding a stat to beat a target equal to five or six. This varies though. Sometimes, the reader will need to roll two or three six-sided dice and beat a higher target to see if Deadpool succeeds, and even then, this may not be enough. In certain challenging situations, the reader will need to roll another round or two other rounds to succeed. In addition, Deadpool can acquire Qualities such as GUARDS, GUARDS, RESOURCEFUL, and CHAOS, but never, ever KUMQUAT. Really. Not KUMQUAT. Not once. Each enters play with a value of one, and again, can fluctuate in play. Deadpool can also carry up to five objects, some of which, occasionally, can be used to improve his stats. Along the way, there games and puzzles too, such as decoding a lock in an underground base or playing the slot at a crummy casino in Atlantic City, and both Six and Deadpool can pick a wide array of achievements.

You Are (Not) Deadpool is well written, with lots of in jokes and nods to Geek culture (especially Lovecraftian Geek culture), but beyond the cover, it does lack illustrations bar entry ending silhouette clipart. As a consequence of being all text, You Are (Not) Deadpool lacks that dual sense of wondering what situation a piece of artwork illustrates and how to get there via the numbered paragraphs, but on the other hand, it does retain much more of sense of mystery.

In the comics and the films, Deadpool is known for breaking the fourth wall (and the Marvel Universe if truth be told), but in You Are (Not) Deadpool he never does that. There is the interaction between Deadpool and Six throughout, but since you as Six are directing Deadpool’s actions, there is a gap between the two, as if you are directing or roleplaying the actions of someone who is directing or roleplaying the actions of someone else. In this case, Deadpool. It might not be breaking the fourth wall, but it is breaking the immediacy of the roleplaying if you think about it. So do not do that. It would spoil the fun.

You Are (Not) Deadpool has three hundred entries, so there is lot to explore and multiple plot threads to follow and investigate, plus some tough challenges, puzzles, and fights to overcome. Deadpool is definitely going to need more than the one run at this—unless he/you/Six are really lucky, and if all three of you fail, then at least Deadpool can come heal and comeback. As for Six? Just cross out his name wherever it appears in the quest and write Seven (or Eight or Nine or…) instead. No one will notice.

Not quite the traditional Solo Adventure Book—but than what did you expect, this is Deadpool, after all, You Are (Not) Deadpool is an entertaining often ridiculous romp alongside the infamous ‘Merc with the Mouth’.