Miskatonic Monday #120: Into the Unknown 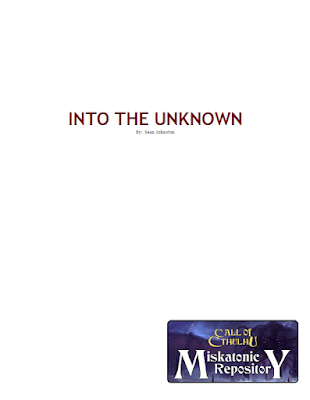 Setting: Near Future Antarctica & Beyond
Product: Scenario
What You Get: Thirty-Four page, 1.02 MB Full Colour PDF
Elevator Pitch: Atlantis: The Lost Empire meets Pitch Black
Plot Hook: An elevator straight to a hell offers ‘the experience of a lifetime’.
Plot Support: Staging advice, seven handouts, one map and two sets of  floorplans, no NPCs, and nine monsters and Mythos creatures.
Production Values: Underwhelming.
Pros
# Science Fiction horror one-shot
# Could be adapted to earlier modern time periods
# Hints at interesting future setting
# Decent descriptions
# Potential for Investigator versus Investigator action
Cons
# Needs a strong edit
# Linear and light plot
# No pre-generated Investigators
# More exposition heavy travel log than adventure
# Potential for Investigator versus Investigator action
Conclusion
# Serviceable set-up leads somewhere interesting with a plot that is more story than interactive.
# Into an unknown of what the Investigators are supposed to do.
Posted by pookie at 12:00