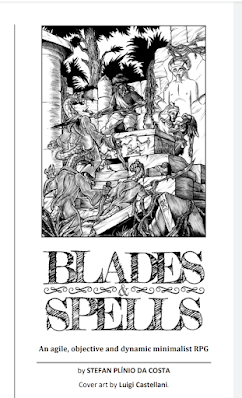 Lâminas & Feitiços or Blades & Spells is a minimalist fantasy roleplaying game from South America. In fact, Blades & Spells is another Bronze Age, Swords & Sorcery minimalist fantasy roleplaying game done in pamphlet form from Brazil. In actuality, Blades & Spells is a series of pamphlets, building from the core rules pamphlet to add optional rules, character archetypes, spells, a setting and its gods, and more, giving it the feel of a ‘plug and play’ toolkit. The Storyteller and her players can play using just the core rules, but beyond that, they are free to choose the pamphlets they want to use and just game with those, ignoring the others. So what is Blades & Spells? It describes itself as “…[A] simple, objective and dynamic minimalist RPG game where the Storyteller challenges the Player and not the character sheet.” It is written to pay homage to the classic Sword & Sorcery literature, uses the Basic Universal System—or ‘B.U.S.’—a simple set of mechanics using two six-sided dice, and in play is intended to challenge the player and his decisions rather than have the player rely upon what is written upon his character sheet. Which, being a minimalist roleplaying game, is not much. So although it eschews what the designer describes as the ‘classic restrictions’ of Class, Race, and Level, and it is very much not a Retroclone, there is no denying that Blades & Spells leans into the Old School Renaissance sensibilities.
Blades & Spells: An agile, objective and dynamic minimalist RPG defines a Player Character in simple terms. He is Human and he has a Name, Focus, Background, and Equipment. His Focus is either Fighter, Mystic, Intellectual, Support, or Specialist, whilst his Background includes goals, skills, knowledge, adjectives, and at least one flaw. He also has ten Hit Points. Character creation is a five-minute job and everything can be recorded on an index card.

Ublaf the Unbelievable
Focus: Fighter
Background: Ublaf is a blond, blue-eyed warrior from the frigid north, who has come far south to make his fortune and prove himself to the girl he wants to marry, but who has so far spurned his advances. He is a good hunter, and capable with both axe and spear, but has no tongue for languages. So often others think him a fool—or ‘Unbelievable!’. He is often impulsive, but invariably tries to be helpful and friendly.
Hit Points: 10

Mechanically, the Basic Universal System of Blades & Spells uses two six-sided dice. To undertake an action for his character, a player rolls the dice attempting to equal or beat a difficulty number set by the Storyteller, ranging from Easy at three all the way up to Epic at twelve. Any roll less than this is a failure and also adds a new complication to the plot. If a Player Character can gain an Advantage from either his Background or Focus, the difficulty number is reduced by two, but increased by two if his Background or Focus would impose a Disadvantage (though this would not increase the difficulty number beyond twelve). Ideally, elements of a Player Character’s Background should work as both Advantage and Disadvantage, depending on the situation. For example, Ublaf’s Impulsiveness would be a Disadvantage if there was trap he could have spotted before he acted, but an Advantage in attempting a foil an assassination attempt on a merchant.

Combat in Blades & Spells is deadly, with attacks, whether by a weapon, magic, or a creature, being either light, strong, or fatal. A Player Character could be killed with a couple of strong blows or even one fatal blow as he only has ten Hit Points (monsters can have more), and once they are gone, that is it. Although monsters have a Challenge Rating equal to the standard difficulty numbers, Player Characters do not, so the default is probably Normal or six. However, shields and armour, in whatever form they take, reduces damage and the Storyteller can allow a Player Character to make a defensive or dodge manoeuvre.

Magic and spells are available to all Player Characters. No spells are described in the base rules for Blades & Spells, but instead, the player decides what the aim of the spell is. Is it to Attack, Defend, Create an advantage, or Overcome an obstacle? The Storyteller sets the difficulty number and the player rolls. If successful, the spell is cast and has the desired effect. Failure though means that the Player Character has suffered Arcane Corruption, which might be that the spell effects turn on the caster rather than the intended target or a second grotesque head grows from the caster’s shoulder, which stays for a few days before withering away, in the meantime annoying everyone with its different opinions and ideas.

So that really is it to Blades & Spells: An agile, objective and dynamic minimalist RPG. Or at least the core rules. It fits on two sides of a single sheet of paper. It is cleanly laid out, although it does need an edit in places to account for the translation from Portuguese to English. It has a decent piece of artwork on the front. It is also perfectly playable barring a couple of issues. One is that it does leave the Storyteller to wonder what sort of complications a failure of a dice roll might add to the plot and it does not state what the difficulty number is for hitting a Player Character in combat.