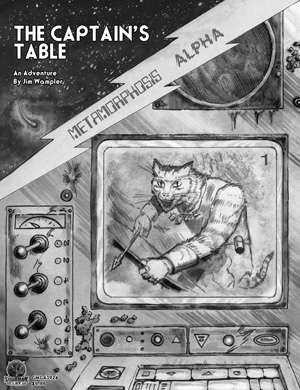 The Captain’s Table is a scenario for Metamorphosis Alpha: Fantastic Role-Playing Game of Science Fiction Adventures on a Lost Starship. The first Science Fiction roleplaying game and the first post-apocalypse roleplaying game, Metamorphosis Alpha is set aboard the Starship Warden, a generation spaceship which has suffered an unknown catastrophic event which killed the crew and most of the million or so colonists and left the ship irradiated and many of the survivors and the flora and fauna aboard mutated. Some three centuries later, as Humans, Mutated Humans, Mutated Animals, and Mutated Plants, the Player Characters, knowing nothing of their captive universe, would leave their village to explore strange realm around them, wielding fantastic mutant powers and discovering how to wield fantastic devices of the gods and the ancients that is technology, ultimately learn of their enclosed world. Originally published in 1976, it would go on to influence a whole genre of roleplaying games, starting with Gamma World, right down to Mutant Crawl Classics Roleplaying Game – Triumph & Technology Won by Mutants & Magic from Goodman Games. And it would be Goodman Games which brought the roleplaying game back with the stunning Metamorphosis Alpha Collector’s Edition in 2016, and support the forty-year old roleplaying game with a number of supplements, many which would be collected in the ‘Metamorphosis Alpha Treasure Chest’.

The Captain’s Table is written by the designer of Mutant Crawl Classics Roleplaying Game – Triumph & Technology Won by Mutants & Magic and uses the spiritual beliefs of the Player Characters to draw them into adventure. Their spiritual belief system involves not just ancestor worship, but worship of the original officers who commanded the Starship Warden. Essentially, they have come to form a pantheon of their own for the tribe, so when the Player Characters come upon a holo-egg which unexpectedly projects a larger-than-life vision of Captain Jameson—one of the five original captains of the Warden—they are not only surprised, they almost struck down in religious awe! Further, when he asks for their aid in recovering a storage crate with materials essential to his plans, they realise that he is giving them a holy quest! Surely something that the Player Characters should undertake in order to prove their worthiness to both the ancients and the Great Officers? So begins the quest to The Captain’s Table.

The Captain’s Table is a relatively short scenario, consisting of three parts which should take a session or two to play through—if the Player Characters stick to their quest, that is. In the first part, they are given directions as to where to go and what they need to progress further, including an opening scene in which the Captain actually informs them where they are. That is, on a giant spaceship! Thus the Game Master may want to run this scenario a few sessions into her campaign after the characters have already learned this themselves rather it being revealed to them via a dose of exposition. Not only does the Captain give away information, he directs them to an armband which will allow access to certain parts of the ship. This includes the Cargo Deck, the scene for the second part of the scenario. Here is the main stage for the scenario, a single vast level thirty-our miles long and sixteen miles wide consisting of hundreds of mile-long cargo bays. One of these is the Player Characters’ destination, but they will need to make the trek there using the clues given by the hologram of Captain Jameson, negotiate (or possibly fight) with other scavengers for possession of what they have been sent to collect before taking it to Captain Jameson himself.

Despite its brevity, there is a lot of detail and flavour to the scenario. There are monsters and other creatures to be found, from Wolfoids and Felenoids—the latter with a penchant for fashion, to Space Weevils and intelligent Oozes, a whole Level of mostly unopened cargo crates to open, and of course, getting to have dinner literally at the Captain’s Table. Some of the encounters are designed to be combat encounters, but others involve roleplaying and the Game Master has some fun NPCs to roleplay. Although the scenario is relatively short, providing no more than a session or two’s worth of play, the Player Characters are free to go explore the whole of the Cargo Level, perhaps cracking open cargo bays and crates as they go, or the Cargo Level is somewhere that they can come back to again and again after the events of The Captain’s Table, looking for further supplies or devices that will help them in their exploration of the Starship Warden or just help their tribe survive. Either way, tables of encounters and cargo bay contents support both options.

If there is a problem with The Captain’s Table, it is the finale. As written, it is fine, it makes sense, and it is amusing, but some players may feel slightly cheated when they and their characters discover what has been going on. Consequently, players do need a sense humour when playing this scenario and not to be too po-faced about its revelations. Plus, ultimately, their characters are rewarded for their efforts and do learn more about the Starship Warden. For the Game Master there are some fun references too, most notably The Wizard of Oz, Red Dwarf, and Terminator 2, but these are handled with some subtlety. Plus in the long term, the Game Master can have the Player Characters return to the Cargo Deck as and when it suits the plot and ‘Captain Jameson’ hologram could become a recurring NPC. If there is an issue to the scenario, it is that the clues do need to be carefully presented if the players are to take advantage of them.

Physically, The Captain’s Table is engagingly written and nicely illustrated. The maps are well done, often illustrating events as much as locations within the adventure. The handouts are decent too, though the Game Master may need to be more direct in making their use by the players a little easier.

Both the plotting and the staging of The Captain’s Table are quite tightly tied to Metamorphosis Alpha and the Starship Warden. However, with a little bit of effort and teasing apart of its individual parts, both plot and the locations—especially the Cargo Deck, which could simply become an enormous warehouse—could be reworked into other post-apocalyptic settings. In general, the drier or less gonzo the setting, the more adaptation effort required, but the scenario would work with Mutant Crawl Classics, Gamma World, and even Mutant: Year Zero.

The Captain’s Table is a short, entertaining scenario which makes good use of its inspirations and provides content which the Game Master can return to. It is easy to add to any Metamorphosis Alpha campaign and should provide a session or two’s worth of play (and potentially more).