Dinosaurs and Mutants, Oh My! 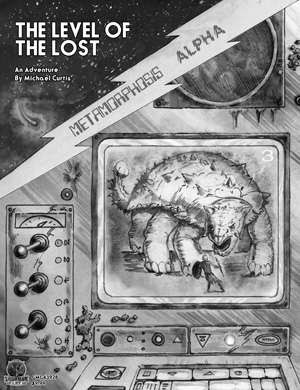 The Level of the Lost is a scenario for Metamorphosis Alpha: Fantastic Role-Playing Game of Science Fiction Adventures on a Lost Starship. The first Science Fiction roleplaying game and the first post-apocalypse roleplaying game, Metamorphosis Alpha is set aboard the Starship Warden, a generation spaceship which has suffered an unknown catastrophic event which killed the crew and most of the million or so colonists and left the ship irradiated and many of the survivors and the flora and fauna aboard mutated. Some three centuries later, as Humans, Mutated Humans, Mutated Animals, and Mutated Plants, the Player Characters, knowing nothing of their captive universe, would leave their village to explore strange realm around them, wielding fantastic mutant powers and discovering how to wield fantastic devices of the gods and the ancients that is technology, ultimately learn of their enclosed world. Originally published in 1976, it would go on to influence a whole genre of roleplaying games, starting with Gamma World, right down to Mutant Crawl Classics Roleplaying Game – Triumph & Technology Won by Mutants & Magic from Goodman Games. And it would be Goodman Games which brought the roleplaying game back with the stunning Metamorphosis Alpha Collector’s Edition in 2016, and support the forty-year old roleplaying game with a number of supplements, many which would be collected in the ‘Metamorphosis Alpha Treasure Chest’.

The events of The Level of the Lost takes place behind a feature known as the ‘Impenetrable Wall’. Rumour has it that the fabled trader, Gurn the Far-Travelled, has found one of the fabled Command Rings, perhaps one of the most potent artifact of the original crew, since it grants the wearer  complete control over the Starship Warden and access to any Level and through any door—including the previously closed door in the ‘Impenetrable Wall’. So when his robot companion is found damaged outside the open door through the ‘Impenetrable Wall’, there has to be truth in the rumours. The question is, what happened to Gurn the Far-Travelled and wherever he is, does he still have the Command Ring?

What lies beyond the ‘Impenetrable Wall’ is a mini-sandbox comprised of increasingly difficult encounters with dinosaurs made all the more challenging by the fact that they, like many of the Player Characters, possess mutations and the fact that their larger metabolisms means that many of the mutations and devices will not be as effective upon them. There are other encounters too, including with a tribe of reptilian humanoids and a unit of highly trained Pure Strain Humans, but in the main, the Player Characters are free to wander where they will. The forests and mists will not necessarily help them in orienting themselves, but gaining access to one of the few remaining observation towers may give them the lay of the land. By the second of the scenario’s three acts, the Player Characters will ideally have discovered the ‘Crichton Initiative Cloning Lab’ at the heart of the preserve and begun to winkle out some of its secrets. This includes the recent comings and goings with the opening of the door in the ‘Impenetrable Wall’ which allow the Player Characters to tighten their search for Gurn the Far-Travelled. The scenario comes to a climax in the third act when, of course, the Player Characters face off against the ‘King of the Dinosaurs’! Naturally, this is a Metamorphosis Alpha version of the ‘King of the Dinosaurs’, so the Game Master should expect something strange—and the author certainly delivers.

The Level of the Lost is a tough adventure and is best suited for experienced Player Characters with plenty of equipment and weaponry to help protect themselves in the verdant habitat of the Dinosaur Preserve. Certainly, they and their players deserve to feel a sense of accomplishment in defeating some of the mighty beasts to be found within the enclosure—especially the last one. Plus, if they do, then they are amply rewarded. Even with that reward and that sense of accomplishment, this as the scenario outlines, is only the beginning of their troubles for the Player Characters. Not only have they come into possession of an artefact that everyone wants, they must learn to use it wisely and not run off into regions of the Starship Warden that they now have access to, but which they may well be unprepared for.

Physically, The Level of the Lost is cleanly presented. The maps are nicely done as are the illustrations, although not all of them match the text, which is actually much more thematic where there is a mismatch. As an actual adventure, it is a tough affair, primarily offering a mix of exploration and combat—the latter in particular. Any adventure for Metamorphosis Alpha is going to be challenging, but The Level of the Lost is tougher than most, which should be no surprising given the type of creatures faced. Plus, given the nature of the reward involved, it should be run later in a campaign when the Player Characters and their story are ready for a change and a push onwards to discover some of the Starship Warden’s bigger secrets…