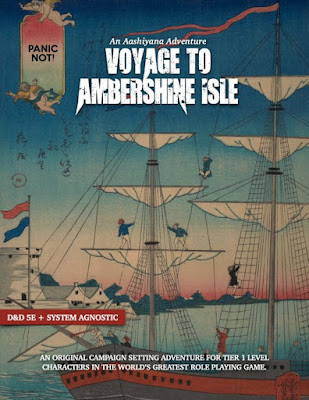 Isolated by nature and isolated by attitude and elitism, Ambershine Isle is known across the realm of Aashiyana for its illustrious academies and guilds, its power and influence which spreads far and wide—especially when it comes to the arts, and thus for its discerning critics and aesthetes whose opinions and tastes have the capacity to make an artist or a performer into one of the greats or cast him into obscurity. Every three years, Ambershine Isle holds the ‘Festival of Ambitions’, a magnificent gala which attracts the ambitious and the aspiring from across the realm, hoping to be picked from amongst the throngs and be recognised for their skill and their talent. Some are fortunate enough to have had their potential has already been noted by the isle’s academies and guilds and so been offered a magical invitation to Ambershine Isle. Others will have to make their own way there—whether one of the would-be artistes, or simply a merchant or grifter, wanting to take advantage of the ‘Festival of Ambitions’. However, the route to Ambershine Isle is not easy, leading across a series of atolls which only seasonally connect the mainland with the Isle and with the upcoming festival, is jammed with slowing moving carriages and crowds undertaking what is a pilgrimage to the arts, only further impeded by the tortuously complex bureaucracy at the gates to Ambershine Isle. There is another route though—across the Steaming Sea, but it takes a special ship to be able to withstand its corrosive waters and a special crew (or set of passengers) to hold off the dangerous aquatic monsters and pirates to be found in and on those waters. The Dreamer is that ship and those passengers are the Player Characters.

This is the set-up for Voyage to Ambershine Isle, the inaugural scenario for the Aashiyana Campaign setting—Aashiyana being the Urdu word for home—from PanicNot!, a collective of creators based in Mumbai. Designed to be both run using Dungeons & Dragons & Fifth Edition and ‘Systems Agnostic’, both scenario and setting are inspired by inspired by South Asian—and specifically Indian—culture, with Voyage to Ambershine Isle being written for First Level characters and intended to be played in a session or two. Over the course of the adventure’s three acts, the Player Characters will get to know Captain Wannaba and his wife, First Mate Mistress Wannafi, the owners of The Dreamer, meet the passengers, deal with stowaways, face some of the Steaming Sea’s deadly wildlife, and get involved in one or two of the schemes of the passengers aboard the vessel.

Voyage to Ambershine Isle begins slowly, but quickly gets the action going. After an opportunity for the Player Characters and the NPCs to introduce themselves, discuss their future plans, and perhaps pick up a hint or two as the secrets and motives of others, The Dreamer—a converted garbage barge sitting in a mithral hull to withstand the corrosive waters of the Steaming Sea—lurches as its hits something—hard! As the captain and his wife attempt to bring the vessel under control, they call for help, tasks made all the more difficult by a horde of Steamed Crabs which scuttle aboard at the same time. The crustaceans seem particularly drawn to below decks and following in their wake into the cramped corridors and quarters, the Player Characters have opportunities for both combat in the close confines and the discovery or two of secrets belonging to both crew and passengers as they check the various cabins, quarters, and other spaces below deck. Eventually, the Player Characters will discover the cause of The Dreamer lurching—the hull has been pierced and plugged by a Giant Mithral Crab! The Player Characters are free to handle this encounter in any way they like and it is nicely explained, going over the various options and outcomes. This can involve combat or roleplaying, though there is an optimal solution to the situation.

Once the situation below has been sorted, the Game Master has two options, or routes, for the scenario’s third act. ‘Route A’ is the shorter of the two, intended to bring Voyage to Ambershine Isle to close if the playing group is short of time, perhaps if the Game Master is running it as a convention scenario. It is very much a case of ‘wham-bam and we are done’ with little in the way of Player Character input and so is the least satisfying. ‘Route B’ is the longer of the two, and sees the Player Characters involved with a passenger complaint—a theft. The situation is not too difficult to resolve and may benefit from the Player Characters’ investigations below deck earlier in the scenario. Again, the encounter is nicely explained and gives options for the outcome, one of which would be to run the first option, ‘Route A’ as the scenario’s big climax if things go really wrong—really wrong! Once the dust has settled, culprits apprehended, secrets revealed, and perhaps a mighty monster defeated (perhaps), the Player Characters will have arrived on the shores of Ambershine Isle.

In addition to the advice on managing the encounters in the first and second acts, the Game Master is given further support for Voyage to Ambershine Isle with a series of appendices. These provide the stats for all of the NPCs and monsters—motivations for each is given earlier in the text, deck plans for The Dreamer, descriptions of the magic items and loot to found in the adventure, a big set of URLs for links to ‘GM Resources’ to help her run the scenario, and a table of trinkets to be found aboard the ship. The list of Game Master resources is particularly useful if the Game Master has never run a combat or a roleplaying adventure set at sea before, but includes links to general advice also.

Voyage to Ambershine Isle is not badly laid out and it makes good use of its art, as well as sporting the rather fetching painting of a Dutch Ship by Utagawa Yoshitomi. The scenario needs a tighter edit in places, but is otherwise well written and easy to understand.

The main issue with Voyage to Ambershine Isle is its brevity. It is too short to really get a feel of the Aashiyana setting and what makes it different from any other campaign other than it being from a collective of Mumbai-based authors. This is not necessarily to criticise the adventure itself, which though short, is action-packed and has plenty of opportunities for both roleplaying and investigation. Perhaps the best way to showcase the Aashiyana setting would have included some pre-generated Player Characters, each with their own motivations for wanting to go to Ambershine Isle and attend the ‘Festival of Ambitions’. As a short, sea-based adventure, Voyage to Ambershine Isle is pretty good and easily adapted to the setting of the Game Master’s choice, the encounter advice very much helping with that. For example, 50 Fathoms for Savage Worlds would be a suitable setting for it.

As the first scenario from new publisher PanicNot!, Voyage to Ambershine Isle is a short, but exciting combination of roleplaying, investigation, and combat, backed up with solid support for the Game Master. As an introduction to the Aashiyana setting Voyage to Ambershine Isle is underwritten and needs something more to really entice either Game Master or her players.