The Other OSR: In the Labyrinth

It is impossible to ignore the influence of Dungeons & Dragons and the effect that its imprint has had on the gaming hobby. It remains the most popular roleplaying game some forty or more years since it was first published, and it is a design and a set-up which for many was their first experience of roleplaying—and one to which they return again and again. This explains the popularity of the Old School Renaissance and the many retroclones—roleplaying games which seek to emulate the mechanics and play style of previous editions Dungeons & Dragons—which that movement has spawned in the last fifteen years. Just as with the Indie Game movement before it began as an amateur endeavour, so did the Old School Renaissance, and just as with the Indie Game movement before it, many of the aspects of the Old School Renaissance are being adopted by mainstream roleplaying publishers who go on to publish retroclones of their own. Dungeon Crawl Classics Role Playing Game, published by Goodman Games is a perfect example of this. Other publishers have been around long enough for them to publish new editions of their games which originally appeared in the first few years of the hobby, whilst still others are taking their new, more contemporary games and mapping them onto the retroclone. 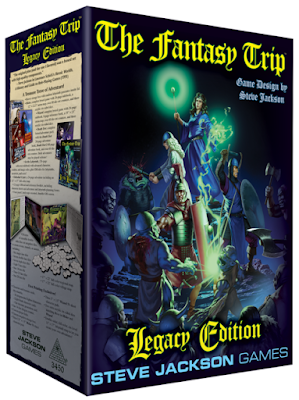 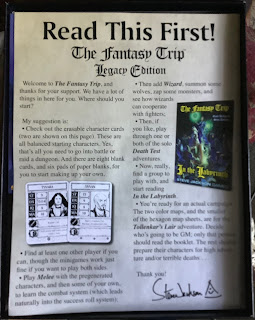 The Fantasy Trip: Legacy Edition is a big box of things, including the original two microgames. So instead of reviewing the deep box as a whole, it is worth examining the constituent parts of The Fantasy Trip: Legacy Edition one by one, delving ever deeper into its depths bit by bit. The first of these is Melee, quick to set up, quick to play game of man-to-man combat, followed by Wizard, which did exactly the same for sorcerers and other magic-users. The third part of this triumvirate is Death Test, which combined the two original scenarios—‘Death Test’ and ‘Death Test 2’—both originally published as MicroQuest 1: Death Test and MicroQuest 1: Death Test 2 in 1980. bringing the trilogy of mini-boxed sets together is The Fantasy Trip: In the Labyrinth. This is not yet another mini-box, but a book which combines their content into one volume and expands upon with further rules, expansions, and options which lift Melee and Wizard up from being combat and magical skirmish games respectively into an actual roleplaying game. What it lacks though is the counters and maps to be found both in Melee and Wizard, but that is not an issue with The Fantasy Trip: Legacy Edition. 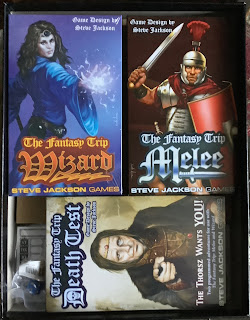 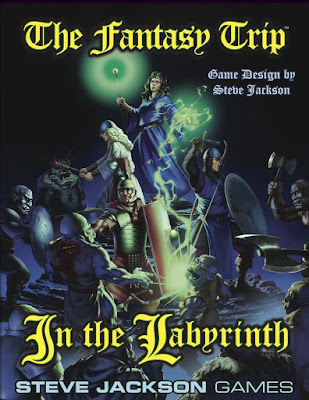