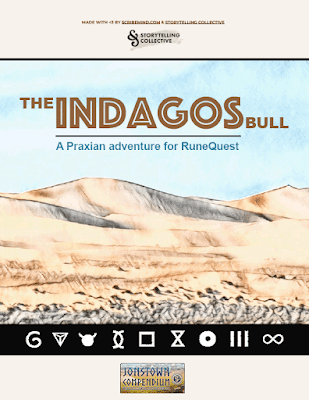 What is it?
The Indagos Bull: A Praxian adventure for RuneQuest is a scenario for use with RuneQuest: Roleplaying in Glorantha.

The layout is clean if uneven. The illustrations are decent, but the maps vary in quality. The scenario requires an edit.

Where is it set?
The Indagos Bull: A Praxian adventure for RuneQuest is set in Pavis County, north-east of Garhound, just before before the Big Earth Season Fair.

Who do you play?
Player Characters of all types could play this scenario, but Eiritha and Yelm worshippers might be useful as would Orlanth and Ernalda worshippers.
What do you need?
The Indagos Bull requires RuneQuest: Roleplaying in Glorantha and the Glorantha Bestiary. Supplements such as Pavis: Threshold to Danger and Pavis: Gateway to Adventure may be useful for background material, but neither is required.
What do you get?
The Indagos Bull: A Praxian adventure for RuneQuest is a mystery and investigative scenario which takes place in Pavis County, north-east of Garhound, just before before the Big Earth Season Fair. It is two days before the Eiritha High Holy Day and the two events that everyone is looking forward to—the Indagos Bull contest and the Indagos Cow contest. Attendees at the Big Earth Season Fair are allowed to bet on the outcome and the winner of each contest will win cash prizes, whilst the winning animals play the central role in the Eiritha Fertility Ritual conducted at the culmination of fair to grant a community blessing that will ensure healthy and numerous offspring from the area’s cattle. For the last twelve years, farmer Bilijo Jyles has won this contest with several prize bulls and ensured a fine blessing for the region in each of those years. Unfortunately, Farmer Jyles’ prize bull for this year has gone missing!
Whether by Farmer Jyles, the Eiritha priestess, or some other authority, the Player Characters are hired to locate the bull, or alternatively, they are merely passing through and see the notices posted about and volunteer to find the missing bull. The scenario itself is presented as a series of clues, locations, and NPCs with an explanation as to what has happened to the bull. The Player Characters are free to follow these in whatever order they like, whether that is visiting the local farmers on their steads, interviewing locals at the tavern, looking for rumours, and so on. The scenario and its solution to its mystery are quite straightforward, but there are one or two wrinkles along the way.

The scenario is supported with notes on Praxian construction and farming, Eiritha and her cult and temples, and more. Farms for two of the major NPCs in the scenario are nicely and appropriately mapped, and whilst there is a regional map, there are no maps of either the town of Indagos or the end scene for the scenario. Also missing is anything about the Indagos Cow contest, which might be something that the Player Characters could make enquiries about. Sadly, the missing bull is not named. The scenario can easily be adjusted to fit elsewhere. For example, perhaps the missing bull could be a case for the Player Characters from Tales of the Sun County Militia: Sandheart Volume 1?
Written and published as part of the ‘Storytelling Collective’, The Indagos Bull is rough around the edges, and can be best described as Sir Arthur Conan Doyle’s ‘The Adventure of Silver Blaze’ meets Radio 4’s The Archers, but in Prax’. However, its plot is solid and relatively simple, and above all, engaging. The scenario is also short and could be run in a single session.
Is it worth your time?
Yes—The Indagos Bull: A Praxian adventure for RuneQuest is a solidly plotted and clearly presented missing bull mystery, that although rough around the edges, can easily be added to a campaign set in Prax.
No—The Indagos Bull: A Praxian adventure for RuneQuest is of little use if the Game Master’s campaign is not set in Prax or Eiritha is not an important figure.
Maybe—The Indagos Bull: A Praxian adventure for RuneQuest is useful if the Game Master wants to take her campaign into Prax, but adapting it outside of Prax might take extra effort.
Posted by pookie at 12:00