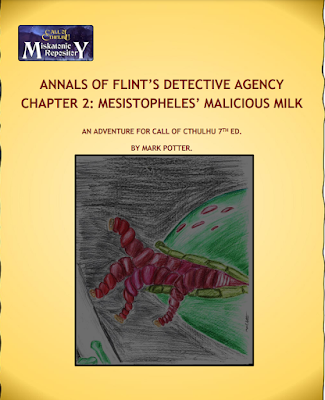 Setting: Jazz Age Chicago
Product: Scenario
What You Get: Thirty-Four page, 1.82 MB Full Colour PDF
Elevator Pitch: “First you take a drink, then the drink takes a drink, then the drink takes you.” – F. Scott Fitzgerald, The Great Gatsby
Plot Hook: Investigating a young man affected by the demon drink leads to demons!
Plot Support: Eight NPCs, six handouts, five maps, four Mythos artefacts, and three Mythos monsters.
Production Values: Variable.
Pros
# Sequel to Annals of Flint’s Detective Agency: The Case of the Stolen Golf Clubs
# Many Hobbit jokes
# Throws the Mob and the cops into the mix
# Decent investigation
# More than the Mythos involved for extra storytelling elements
# Familiar set-up and plot, but not badly done
# Selaphobia
# Dipsophobia
Cons
# Needs a strong edit
# Familiar set-up and plot, but not badly done
# Too many Hobbit and other jokes
# Maps a little too small
Conclusion
# Solid investigation at the height of Prohibition undone by too many jokes and uneven production values, and a degree of familiarity with other Prohibition-set scenarios.
# Good mix of the Mob, the Cops, plus extra storytelling elements gives some good roleplaying opportunities.
Posted by pookie at 12:00