Friday Fantasy: In a Deadly Fashion 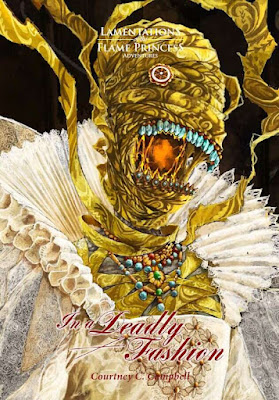 Word and rumour are spreading across the whole of Europe. Miucci Carnivo is the greatest fashion designer of his age, his clothes and outfits in high demand not only in his home city of Seville, but across the whole of Spain and beyond. The dress he has fashioned for the Countess Serena de Reya for her wedding is said to have cost eighteen thousand gold pieces and taken him three months to make. He is never short of clients with deep pockets ready to purchase his latest designs, and he himself has become a wealthy man. Yet, his private life is a matter of debate and it is rumoured that strange men and women come to his house at night on a regular basis. Then there is the matter of his greatest rival, Francisco Alcon, found slaughtered in his home. Is Miucci Carnivo connected to his death, and if so, then how? These rumours have even reached his ears and he is worried—though these are not his only concerns. The dress he has designed for Countess Serena de Reya has gone missing and several of his customers have also turned up dead. All of which could affect his business, if not ruin his good name. Thus, he hires the Player Characters to investigate all of this, and he is prepared to pay handsomely—which should be enough to pique their interest and get them involved!

This is the set-up for In a Deadly Fashion, a murder mystery and mystery scenario for use with Lamentations of the Flame Princess Weird Fantasy Roleplay. Like other scenarios published by Lamentations of the Flame Princess it is set in the game’s default early Modern Period. Specifically, in Seville, Spain, so it would work well with several of the other publisher’s titles or equally easily adapted to the retroclone of the Game Master’s choice. Yet by its very nature, the scenario is easily adaptable to other roleplaying games set in the same period, such as Warhammer Fantasy Roleplay, or even a time travel roleplaying game such as Doctor Who: Adventures in Time and Space! The scenario is not without its issues though, primarily due to its historical setting, which means that it involves religious bigotry. The scenario does not involve it directly in its story line, but it is present by implication. Further, the scenario involves a cult and some of the activities its members engage in are both listed and illustrated—the latter not explicitly, but it is clear what is happening. It is entirely up to the Game Master and her players how they want to deal with this aspect in play, but it is easy easy to draw a veil over this if necessary.

Whether hired by Carnivo, the government, a relative of one of the victims, or simply greedy enough to take an interest in some very valuable items of clothing, In a Deadly Fashion is easy to set-up and run. As Carnivo, the Game Master quickly points the Player Characters in the direction of the four avenues of investigation—the homes of Countess Serena de Reya, the two customers who died, and the rival tailor. Each of these has their own section in the book, which detail the locations, NPCs, clues, and so on, to be found there. The investigation itself is detailed, but limited. There are few if any clues beyond these locations, but if the Player Characters do come unstuck and are unable to progress any further, an NPC is provided who can point them in the right direction. There is also the equivalent of the local Catholic police who might be interested too, and could be helpful to the Player Characters, leading to an encounter with a bishop with a laconic and oddly elliptical manner.

Ultimately, the clues should lead back on themselves and point towards Miucci Carnivo as being the culprit—rather his clothes! For reasons unknown, they have taken on a life of their own and conducting a series of murderous acts. The scenario should ideally come to head as the Player Characters return to Carnivo’s mansion with all of its nouveau riche fripperies to confront him, only to find a cult party in full swing and the discovery of the missing dress before it animates and attacks! This is intended to be creepy, even unnerving, and should be a good set-piece with which to end the scenario.

In a Deadly Fashion is not a scenario which needs much in the way of maps. However, its one map, that of Carnivo’s mansion, is oddly placed, nowhere near the descriptions of its locations towards the back of the book. Nor is the actual plot presented in a fashion that makes it easy to read and use by the Game Master. The finale, or at least the aftermath, of the scenario is underwritten, as is the description of Seville. Of course, that makes the scenario easy to adapt elsewhere to the city of the Game Master’s choice, but if that is not an option, she will still needed to conduct some research on seventeenth century Spain and Seville. Even a page of information would have been useful, since it is rare for any scenario to be set there, let alone one for Lamentations of the Flame Princess Weird Fantasy Roleplay. There is though, decent advice on running a murder mystery and on running one in which the Player Characters are equipped with magic.

Physically, In a Deadly Fashion is a very presentable, if slim hardback. The writing is clear and easy to grasp, much of it little more than bullet points, such that a Game Master can prepare the scenario quickly and easily. The map is more pretty than serviceable, whilst the artwork is excellent, done in dense, rich palette of colours.

In a Deadly Fashion is easy to read and quick to prepare, and can be run more or less from the page. It is a solid murder mystery which should provide two or three session’s worth of creepy, horrific play.