Jonstown Jottings #73: The White Upon the Hills 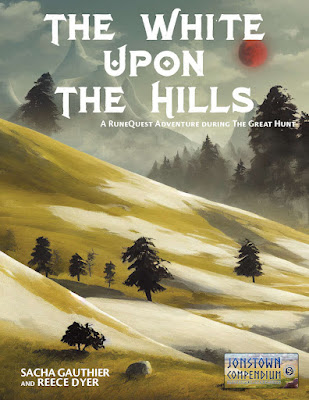 The White Upon the Hills is a scenario for use with RuneQuest: Roleplaying in Glorantha.

The layout is clean and tidy. Both artwork and cartography are decent.

Where is it set?
The White Upon the Hills is set in the Stael’s Hills in the Northern Malani Lands in Storm Season 1626 during the Great Hunt.

Who do you play?
There are no requirements or suggestions for the Player Characters to play The White Upon the Hills, but worshippers of Odayla, Yinkin, Foundchild, and the like will have good reason to play this scenario.
What do you need?
The White Upon the Hills requires RuneQuest: Roleplaying in Glorantha only.
What do you get?
The White Upon the Hills explores the consequences of a misinterpreted myth and the revenge wrought as a result. The Player Characters are invited to participate in the Great Hunt, and annual ritual. This can be because they are members of the tribe, rivals, or outsiders, but whatever the reason for joining, they want to prove themselves as hunters. As they set out on the hunt, they discover that the Stael’s Hills are suffering from a blight, a white poison which seems to adhere to everything. After rescuing a surviving hunter whose party was attacked by a strange beast, the Player Characters are drawn into the efforts to cleanse the hills of the ‘White Blight’ and potentially, its source. This involves a number of rituals to prepare the tools necessary before essentially, they go out again, on a ‘great hunt’ to confront the antagonist at the heart of the scenario and the blight that fallen across the land.
The scenario is short and straightforward, but the permutations of any actions taken by the Player Characters are all worked out, with failure leaving the lands either blighted or burnt, and success, potentially healing the hills, and beyond. Given how the scenario is based upon myth, it is pity that the possible reinterpretations of that myth are not explored in light of the efforts of the Player Characters. In the general, the scenario is physical in nature, but it is possible to pursue less physical means in finding a solution to the problem that the scenario presents.
Is it worth your time?
Yes—The White Upon the Hills is physically and spiritually challenging scenario that wilderness type characters will enjoy.
No—The White Upon the Hills is too location specific or it might too physical a scenario for the Player Characters for their players to enjoy, and thus not suitable for the Game Master’s campaign.
Maybe—The White Upon the Hills requires some adjustment to be set elsewhere and elsewhen, but with some adjustments to its themes and motifs, it can be done.
Posted by pookie at 12:00