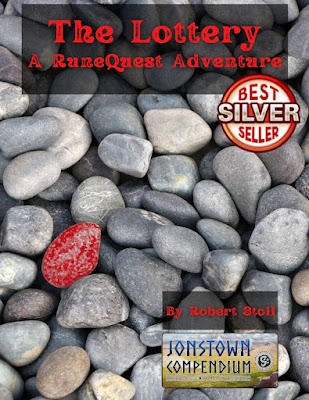 What is it?
The Lottery is a scenario for use with RuneQuest: Roleplaying in Glorantha.

The layout is clean and tidy, and the artwork and cartography excellent. It needs an edit in places.

Where is it set?
The Lottery is set in the river valley of The Deep Cut, just inside the Glowline in Lunar Tarsh.

Who do you play?
A set of six pre-generated Player Characters are provided, all members of the same trade party from Esrolia.
What do you need?
The Lottery requires RuneQuest: Roleplaying in Glorantha and the Glorantha Bestiary.
What do you get?
The Lottery is a one-shot scenario based on Shirly Jackson’s short story, ‘The Lottery’. It begins with an Esrolian trade caravan arriving at a village just inside the Glowline in Lunar Tarsh. Here its members get caught up in a macabre ritual—the voluntary sacrifice to the dread Crimson Bat of villagers, decided by lottery, in order to keep the rest of the village safe. With two members of the caravan taken, it is up to the Player Characters to persuade the villagers to stop this ghastly ritual and rescue their family members being taken away to be eaten!
The Lottery does start with a problem. It has to start with the ritual and get to the point where the cultists of the Crimson Bat take those selected by the lottery before the Player Characters can act. Which involves a fair degree of exposition. However, once the scenario proper does start and they can act, the Player Characters will find themselves racing up and down the valley to reach the other villages and try and persuade their inhabitants that the covenant between them and the Lunar Empire is based on a lie. Fortunately, the Player Characters do have proof, although exactly how is handled in game is underwritten.
Once past the set-up, the players and their characters are free to approach the situation however they want. The scenario focuses on the primary routes across the valley, the Player Characters having the advantage in terms of speed over the Crimson Bat cultists’ wagon, and the NPCs they will have to deal with in the various villages. For the players, there is a pre-generated character each, complete with illustration, whilst for the Game Master, there are stats for the abducted NPCs, the villagers and the local wyter, and the Crimson Bat cultists. There are several handouts and maps. There is also advice on the possible outcomes depending upon the actions of the Player Characters.
The Lottery is a short scenario, intended to be played in a single session. It could easily be run as a convention scenario. It is more difficult to run as a campaign scenario, primarily because the Player Characters are likely to have the Passion of antipathy towards the Lunar Empire and this will influence their initial reactions. None of the provided pre-generated Player Characters have such a Passion.
Is it worth your time?
Yes—The Lottery is a clever adaptation of a classic short story to Glorantha, which although requires a degree of exposition, leads to an exciting player driven situation.
No—The Lottery is of little use if the Game Master’s campaign is not set in Lunar Tarsh, or near there, or involves Player Characters who right from the start hate the Lunar Empire.
Maybe—The Lottery is a difficult scenario to use in an ongoing campaign, primarily due to geography and likely antipathy towards the Lunar Empire, and would be easier to run as a convention scenario.
Posted by pookie at 15:00