Jonstown Jottings #72: Died in the Wool 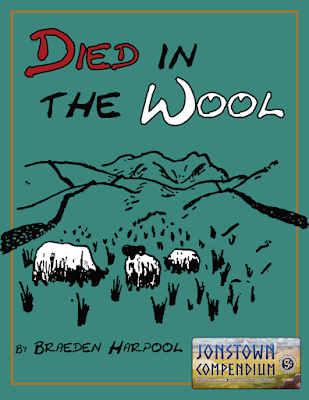 Died in the Wool is a scenario for use with RuneQuest: Roleplaying in Glorantha.

The layout is clean and tidy, but tight. The artwork is basic and the cartography decent. It needs an edit in places.

Where is it set?
Died in the Wool is set in the Afritha Valley and the hills of Oakland in the territory of the Lysang Clan in Sartar in Earth Season, 1626.

Who do you play?
There are no requirements or suggestions for the Player Characters to play Died in the Wool. Player Characters with the Passion, Hate (Trolls) may be at a disadvantage.
What do you need?
Died in the Wool requires RuneQuest: Roleplaying in Glorantha and the Glorantha Bestiary. The RuneQuest Starter Set will also be very useful as Died in the Wool can be run as a sequel to its adventures, whilst Trollpak and In A Merry Green Vale may also be useful references. Neither is necessary to run the scenario.
What do you get?
Died in the Wool is a mini-mystery which transforms into a classic sports film. The Player Characters arrive in the village of Lambwich to find several angry villagers are haranguing, Lady Shade, a Dark Troll merchant. Several of the sheep from the villagers’ flocks have gone missing, and as an outsider, they blame her. Whether asked by Lady Shade, the villagers, or a village elder, or simply because they want to intervene, the Player Characters find themselves investigating. The sheep abductions have been happening at night, in the dark, and yes, that does mean that trolls are involved. However, when revealed, the motivations for the abductions are not as malign as the Player Characters might first think. The trolls are not stealing the sheep to eat or to harass the villagers, but to use as practice for games of Trollball.
Ideally, Died in the Wool should be run after the Player Characters have played through ‘A Rough Landing’ from the RuneQuest Starter Set as the same trolls that appear in that scenario appear in this one. It turns out they are practicing for an amateur trollball game, but they are missing both equipment and team members. What follows is an entertaining ‘get the band back together’ sort of tale leading up to a finale where the Player Characters can attend a trollball game, harass the opposition, make a few side bets, and so on, all balanced against the fact that the villagers still have grievances about their missing sheep, and those have to be rectified. Although the scenario involves a little investigation, it is primarily a roleplaying focussed scenario. Unless the Player Characters initiate it themselves, there is no combat involved in the scenario. After all, Trollball is violence enough for everyone.
In addition, Died in the Wool includes notes on Orlanthi sheep herding, the myth ‘Voriof finds his place’—how Vorioth, son of Orlanth came to be his father’s sheep herder, a discussion of Trollball and its variations and basic rules, and a depiction of the field for one of these variations, ‘Country’ Trollball. The Player Characters are not expected to get involved in the game and there are no rules for that, the game itself being handled through narrative events.
Is it worth your time?
Yes—Died in the Wool is an entertaining roleplaying scenario which works as a solid introduction to Troll customs and a good sequel to the RuneQuest Starter Set.
No—Died in the Wool is location specific and does require the local inhabitants to raise sheep, which might might not fit the Game Master’s campaign. The scenario is not suitable for groups who prefer action to interaction.
Maybe—Died in the Wool requires some adjustment to be set elsewhere and elsewhen, since it ideally should be run after the events of the RuneQuest Starter Set.
Posted by pookie at 12:00