Published in 2014, Colt Express is a super fun game of bandits raiding a train in the Wild West, which would go on to be the 2015 Spiel des Jahres Winner. From one round to the next, each player programs the actions of his bandit and then at end of each round, these actions are played out in order, and as each action happens, the bandits aboard the train interact with each other, plans go awry, and chaos ensues! The fact that this takes place aboard a cardboard model of a train that sits on the table in front of the players and they get to program their bandits’ maneuvres up and down and along the train, only serves to make the game more entertaining. In the years since, Colt Express has been supported by a handful of expansions, such as Colt Express: Horses & Stagecoach, including even a Delorean! However, as good as it looks and as fun as it is to play, Colt Express is at its best when there are six players sat round the table and all six bandits are involved, and a game can devolve into maximum chaos and in the space of thirty minutes or so, tales of how each bandit successfully—or unsuccessfully robbed the Colt Express. So, what do you do if there are fewer than six players? Five players is fine, four maybe… With fewer players how do you back up to that maximum fun? Well, publisher Ludonaute has a solution—the Colt Express Bandits series.

The Colt Express Bandits series consists of not one expansion, but six. One for each of the six bandits in Colt Express—Belle, Cheyenne, Django, Doc, Ghost, and Tuco. Each expansion replaces its particular bandit in the game, but not when the bandit is being played by a player. Rather an expansion takes the place of a bandit who is not being controlled by a player and hands that control to the game itself. Each Colt Express: Bandits expansion adds new deck of eight Action cards which will control the bandit from one turn to the next and two special moves or effects.

So, what can each bandit do? 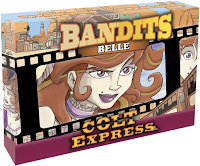 In Colt Express, with a “Liddle ol’ me?”, Belle cannot be targeted by a Fire or Punch action if another Bandit can be targeted instead. In Colt Express Bandits – Belle, her Action cards consist of Move—always towards where there is the most jewels to be picked; Punch—everyone in the same carriage and always towards the back of the train!; Theft—steal a Jewel from every Bandit in the same carriage; Robbery—jewels if she can; and Charm—make all of the Bandits aboard the train move towards her. Lastly, when she encounters the Marshal, she charms him into not shooting her! Belle is all about using her charm to steal as many jewels as she possibly can. 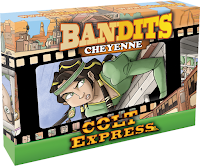 In Colt Express, Cheyenne is a pickpocket and when she punches a Bandit, also steals a Purse from her victim. In Colt Express Bandits – Cheyenne, her Action cards consist of a Double Move—two carriages if in the train or four if on the roof, or a Single Move—one carriage if in the train or two if on the roof, and always towards the most Bandits, after which she pickpockets a Purse from a random Bandit in her new location. She also a Bow Attack which replaces her pistol attack, enabling her to fire poisoned arrows at her rivals. These are treated like bullets as in the standard game and clog up a Bandit’s Action Deck. A poisoned Bandit must grab one of the Antidotes—to be found throughout the train—to be consumed per Poisoned Arrow taken. A Bandit who has suffered one or more Poisoned Arrows cannot win the game. Thus, Cheyenne is all about stealing Purses from her rival Bandits and preventing them from winning with her Poisoned Arrows. 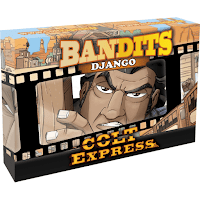 In Colt Express, Django is a crackshot and when he shoots another Bandit, he or she is knocked into the next carriage. In Colt Express Bandits – Django, he still has that capability, but here he fires a volley, the bullets hitting the nearest group of Bandits rather than a single Bandit! In addition, at the beginning of the game, each other Bandit receives two Ejection tokens, and at the beginning of each turn, Django places a Dynamite token in the carriage he is currently in if it does not have one. When the Explosion Action card is draw, all of the Bandits caught in the explosions are ejected from the train and must use their next action to reboard the train. Any Bandit ejected from the train in this fashion must give one of their Ejection tokens to Django and these are worth money at the end of the game. Django then, is also about using brute force, with a big gun or a big bang to drive everyone off the train and enable him to scoop up the loot. 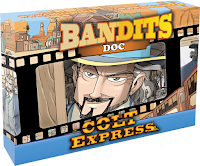 In Colt Express, Doc is in smartest Bandit and always starts each round with seven Action cards rather than six like everyone else. In Colt Express Bandits – Doc gets to be cleverer too. First the Bandit who shoots or punches Doc earns his respect and his Respect card, allowing that Bandit’s Player to control Doc until another Bandit shoots or punches Doc. Doc also shoots special bullets which deny the shot Bandit particular actions, such as Fire, Floor Change, Punch, or Move, depending on the card. Doc also sets up a Poker Game, which forces every Bandit with loot to participate by contributing one of their already purloined loot, with Doc adding one from his stake. The player controlling Doc gets to redistribute this loot, Doc receiving two, and everyone else one bar a single Bandit who gets nothing. This is a slightly fiddly, slightly more complex expansion, the player controlling Doc getting to feather his Bandit’s own nest whilst ensuring his rival Bandits, including Doc does not receive as much. 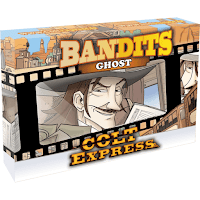 In Colt Express, Ghost is the sneakiest of the Bandits and can place his first Action card face down into the common deck rather face up as is standard. In Colt Express Bandits – Ghost, he is after the Special Suitcase which replaces the Strongbox which begins play in the locomotive, guarded by Marshal. Any Moves he makes is always towards the Special Suitcase, but he also has combined action which enable him to do a Floor Change and then Fire, and his Fire and Punch actions affect every Bandit in the same carriage. Ghost is all about obtaining the Special Suitcase and will win the game if he has at game’s end, so when Ghost is in play, the game becomes about denying him the Special Suitcase as much as it is stealing as much loot as possible. 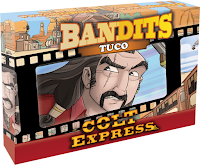 In Colt Express, Tuco can shoot up or down through the roof of the carriage he is, targeting a Bandit who is on the roof if he is in the carriage or a Bandit who is in the carriage if Tuco is on the roof. In Colt Express Bandits – Tuco, he can still do that. When he takes a Move Action, it is always towards the largest group of Bandits and as with other Bandits, his Punch and Shoot attacks affect multiple Bandits in or on the same Carriage. Tuco’s double-barrelled shotgun fires more bullets though and although Tuco cannot win by expending all of his bullets, he gets extra bullets and receives loot for each bullet fired. In addition, Tuco can swap places with the Marshal and if another Bandit forces Tuco to be in the same carriage as the Marshal, the offending Bandit receives a Wanted token. Each Wanted token adds to a Bandit’s final score, including Tuco’s. So Tuco wants to avoid the Marshal if he can because he is wanted and rival Bandits want to get Tuco and the Marshal together.

What is interesting is that elements of the Colt Express Bandits could be incorporated into the main game. So Belle could use her charm on the Marshal, Cheyenne could use her Poisoned Arrows, Django could seed the train with Dynamite and set off the explosions, Doc could play the Poker game, Ghost by possessing his Special Suitcase, and Tuco by avoiding the Marshal. However, they are not necessarily designed for that and they are not designed as written to be used as more than one entry in the Colt Express: Bandits expansion at a time. This is not to say that an enterprising group could not do that, or even an enterprising player, with the latter actually controlling his own Bandit, whilst the game controls the rest. This would make it fairly complex in working out what happens and when, but if the players are methodical about it, then it should not necessarily be an issue.

Physically, each entry in the Colt Express: Bandits series is well done. The cards are the same quality as those found in Colt Express, the tokens are on thick cardboard, and the little rules leaflet—print in French and English is generally easy to read. However, the English translation is not quite as smooth as it could have been and it could have done with another edit.

Each of six entries in the Colt Express: Bandits series is, to varying degrees, interesting and engaging, and brings out more character from each of the Bandits. The owner of the game is free to pick and choose which of them he wants to, but the likelihood is that he will want all of them, to give him and his gaming group the option to play the Bandits that they want and still have the equivalent of six Bandits in the game. However, this does feel like an expensive option, when perhaps all six expansions could have been collected into the one box (that said, all six expansions in the series will fit the box for Colt Express) and then expanded perhaps with advice on using them for solo play—that is, one player Bandit and five game-controlled bandits and how they might interact. Or on adding the abilities given in this series to the standard play of the Bandits with any of the entries in the Colt Express: Bandits series. As it is, a gaming group, and possibly a single player will have to find that out for themselves how the entries in the series for themselves.

Colt Express is still a great game and the Colt Express: Bandits series adds further flavour and character to each of the Bandits in play. Some options are more complex than others, but overall, adding one or two of these to game should keep the game play fun and add a little challenge and chaos at the same time.