The One Ring Starter 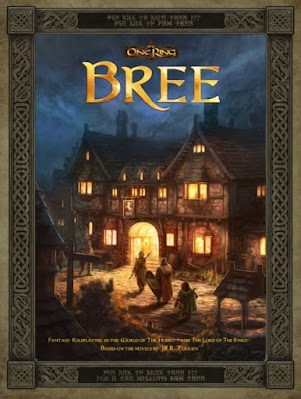 Although this is not a starter set, it is focused on a smaller area and its three scenarios are designed for beginning Player Characters. It takes The One Ring further west from the Misty Mountains, Rivendell, and Eriador, and can serve as both an expansion to that supplement and region, both in terms of its description of the village of Bree and its immediate environs. And then, the three scenarios presented in Bree could easily be added to those set in Eastern Eriador, as detailed as in Ruins of the North. Alternatively, the Loremaster can use the content and scenarios in Bree as an introduction to The One Ring for both the players and their characters, and then go on to explore the wider area and undertake the scenarios set there with Rivendell and Ruins of the North. Essentially, come west from Rivendell with experienced Player Characters or go east from Bree with new ones. With established Player Characters, they could be of any Heroic Culture, but for new ones, it is intimated that players select either Hobbits of the Shire, Men of Bree, Bree-Hobbits, and perhaps the odd Dwarf Heroic Cultures for their Player Characters. This will serve to keep some of the mystery of the wider world to be revealed through the three scenarios in Bree and then on to Rivendell and Ruins of the North. This option would also work well with the forthcoming The One Ring Starter Set from Free League Publishing which focuses on The Shire, so the Hobbits who have had adventures in their homeland, can have their next in and around Bree.

Bree presents Bree-land and its four constituent villages—Archet, Combe, Staddle, and of course Bree for The One Ring. In character, despite the number of traders passing through Bree itself, the village and area is conservative, its inhabitants, both the Men of Bree and the Hobbits of Bree, its Big Folk and Little Folk, sensible and not given to adventures and wild doings. Those that are, of course, are deeply frowned upon, because there is just not something right about them. There is relatively little history to Bree and Bree-land, the village having stood at the crossroads of the Greenway which runs north into a land of dark hills and ruins and south towards the Gap of Rohan, and the East Road which runs from the Misty Mountains in the east to the Shire in the west, for many centuries. It is a bastion of quiet civilisation beyond which lies wilderness and danger, which mostly obviously relies upon the Bree-Wardens and their big sticks and the ancient hedge which encircles the village of Bree for its protection, but the reality is that neither could truly withstand a concerted effort by a force of Orcs or the influence of the Shadow… Thus, at the direction of Gandalf the Grey, the Rangers of the North undertake the duty to protect both Bree and Bree-land, though few Bree-landers realise it and most distrust any Ranger they see.

All four villages of Bree-land are described in some detail, though only Bree is given a map of its own. Understandably, The Prancing Pony, perhaps the most famous inn in all of Middle Earth is described in detail, as the owner, Barnabus Butterbur—the forgetful Barliman is his son—and full plans of the building are provided as is a table of encounters. The Prancing Pony is likely to be the focal point of most of the Player Characters when in Bree, but the supplement suggests several new activities which members of a Fellowship can conduct during the Fellowship Phase. The first is Opening Bree as a Sanctuary—though Bree is so small that the Fellowship will need to earn the trust of Bree’s important personalities and of the Rangers, and become regulars at The Prancing Pony. The others include Guard the East Road, Building the Refuge at Girdley Island—the latter to better support Ranger missions in the area; Write a Letter—this needs to be delivered, but can inform the recipient of the author’s arrival, ask for aid, arrange a meeting, and more; have a Chance-Meeting in the Inn; and more.

Bree adds one new Heroic Culture and makes alterations to a second. The former is Men of Bree, which enables players to create characters from Bree-land with one of six Backgrounds, as per other Heroic Cultures in The One Ring. They include a character having been away to the Blue Mountains as a caravan guard, serving as a Gate-warden, and having become aware of the presence of the Rangers in and around Bree-land. The Heroic Culture captures the sheltered nature and upbringing of the Bree-landers. For Bree-Hobbits, the supplement mixes elements of the Men of Bree and Hobbit of the Shire Heroic Cultures.

Although there are suggestions as to adventuring in and around Bree, the supplement comes with three scenarios which take place over the course of two to three years. They can take place in any year, but the supplement suggests that the first, ‘Old Bones and Skin’ takes place in the autumn of 2950, then the second, ‘Strange Men, Strange Roads’, the summer of 2951, and the third, ‘Holed Up in Staddle’, in the autumn of 2951. The scenarios could be run separately, but really work together as a trilogy which forms a mini-campaign. Each is nicely set up with an explanation as to when, where, what, why, and who before breaking the scenario down into easy parts. All three scenarios are relatively lengthy, and should take two to three sessions to complete.

The first scenario is ‘Old Bones and Skin’, which is in part inspired by a song by Sam Gamgee. It opens amidst a scandal, young Tomas Heatherton having failed to attend his uncle’s funeral, but the discussion of scandal is interrupted when the young man rushes into The Prancing Pony, white as a sheet and blathering about a ghost in the graveyard! This is the opportunity for the Player Characters to strike out as heroes for the first time, and lengthy investigation of the graveyard reveals a more corporeal threat—an old Troll! Chasing the Old Troll across the South Downs is a challenging task, but success leads to a trove of treasure—using the rules for treasure from the Rivendell supplement—and revelation of family secrets. These family secrets tie into the plot behind the trilogy, whilst the adventure will see the Player Characters first make a name for themselves. Although the Player Characters will find themselves going up hill and down dale, this adventure is a bit of a romp, in turns exciting and scary, and mysterious.

The second scenario, ‘Strange Men, Strange Roads’ requires a little bit of a set-up, but this gets the Player Characters their first assignment—meet a contact at the Forsaken Inn, a disreputable and unwelcoming stop further along on the East Road. Unfortunately, the contact is found dead and the most likely culprits are amongst a trade caravan heading back to Bree and beyond. Investigating a trade caravan on the move is a challenge and will require a mix of stealth and guile. The Loremaster has a good cast of NPCs to portray—perhaps slightly too many for the Loremaster new to roleplaying—and even as a murder mystery set in Middle Earth, the scenario has echoes of Film Noir. There are some pleasing encounters along the way, not all of them dangerous, and not all of them casting the villains as truly black-hearted. It should all come to a head in the corridors of The Prancing Pony and present the Player Characters with a moral dilemma. If there is an issue with the scenario it is perhaps that the events it sets up happen off screen. Now these could be played out, but would require more experienced Player Characters and the Loremaster to design the situation to be played out. Otherwise, this is another good scenario, one which brings the darkness to found beyond the borders of Bree to within its thick hedge.

The third scenario, ‘Holed Up in Staddle’ takes place entirely in Bree-land and in bringing the trilogy of scenarios in Bree to close, also brings the consequences of the first two scenarios to head as well. The Player Characters come to the aid of the Rangers in tracking down some of the villains, but despite the aid of a notable figure in the area, lose track of them. With no further leads, the Player Characters are forced to return to Bree. There rumour spreads that one of the richer families of Hobbits in nearby Staddle is acting out of the ordinary, its members having become more reclusive and insular than is the norm. Ideally, Player Characters will follow up on this and ferret out an idea or two as what might be going on. The finale of the scenario and the campaign will see them launch an attack on a Hobbit hole! Which will be a challenge for anyone not Hobbit-sized. The scenario is decent enough, but not as satisfying as the first two and it does feel like the authors are in a hurry to get to its climax and that of the campaign.

Overall, the campaign should ready the Player Characters for adventuring in the wider world beyond the borders of Bree-land. The three scenarios are sophisticated and deep and rich, and involve a good mix of tasks and challenges—physical, social, and combat. The campaign has more of a self-contained feel to it, being confined to one small area, but this more readily allows the Loremaster and her players to bring this smaller part of Middle Earth to life and to have the Player Characters invest themselves in it and in protecting it, likely to open up Bree as their first Sanctuary. One thing that the Loremaster will need to do is prepare a list of NPC names for inhabitants of Bree-land that the Player Characters might run into in any one of the villages and thereabouts, as well as for nefarious ne’er-do-wells—like certain members of the Ferny family—and strangers who might take an interest in their activities.

Physically, Bree is a relatively slim book by the standards of supplements for The One Ring. It is a pretty book, done in earthy tones throughout that give it a homely feel that befits the setting of Middle Earth. The illustrations are excellent, the cartography decent, and the writing is clear and easy to understand. It even comes with a good index.

Bree nicely fits onto the realm of Eriador as an expansion to or lead into Rivendell and Ruins of the North, as much danger and mystery as there is presented—and that danger is very well-presented and explained in Bree—there is ultimately a pleasing cosiness and homeliness to both the supplement and the area it describes. Bree is a charming introductory setting for The One Ring and a fantastic stepping stone onto exploring the wider Middle Earth.