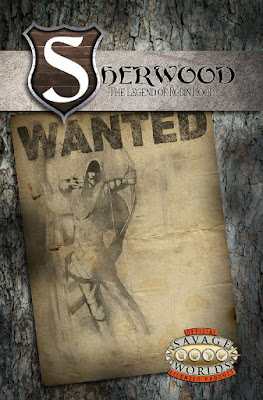 The tales of Robin Hood, of a band of outlaws standing up to the tyrant King John in the Forest of Nottingham are so strongly woven into the folklore, legends, and myths ‘Merrye Olde Englande’ that they are familiar across the English-speaking world. Over the decades, the tales have been reinforced again and again by film and television, from the 1938 The Adventures of Robin Hood with Errol Flynn and the 1950s television series The Adventures of Robin Hood with Richard Greene to more recent adaptations such as the BBC’s Robin Hood of the noughties and the 2018 film, Robin Hood. These adaptions and retellings, of course, vary in quality, tone, and humour, some even having been done as comedies. Similarly, Robin Hood has been the subject of numerous roleplaying games and supplements. Some have been quite comprehensive in their treatment of the outlaw and his band, for example, the supplements Steve Jackson Games’ GURPS Robin Hood and Iron Crown Enterprises’ Robin Hood: The Role Playing Campaign are both highly regarded in this respect, whilst other supplements take a broad approach or simply touch upon the subject of Robin Hood, such as Romance of the Perilous Land from Osprey Games.

Sherwood: The Legend of Robin Hood begins with a ‘Gazetteer of the 13th Century England’, which provides a historical and geographical overview of England—and to an extent, Ireland, Scotland, and Wales—for the period. It covers geography, economy, religion, everyday life, and more, including useful little details such as a list of the religious holidays during the period. Overall, it is a decent overview, giving some context for creating Player Characters and the setting. In terms of setting rules, Sherwood: The Legend of Robin Hood offers three different modes of play. These are Historical—realistic, superstition rather than magic, and relying upon Outlaw skill, luck, and confidence; Mythic England—a combination of mysticism, the supernatural, and the fantastic; and Swashbuckling—cinematic and sword-swinging! Each mode of play comes with a list of its Disallowed Hindrances and Edges, Setting Rules, and new Edges, along with a nod to its particular inspirations. Thus, for the Swashbuckling mode, it is The Adventures of Robin Hood, starring Errol Flynn; for Mythic England, it is the British Robin of Sherwood television series of the eighties; and for Historical, it is Robin Hood: Prince of Thieves from 1991. Of the three modes, Swashbuckling is actually intended to work with the first two, either Historical or Mythic England, so that the Game Master could run a Swashbuckling Historical campaign or a Swashbuckling Mythic England campaign. It should be noted that for role-players of a certain age, Mythic England, based upon Robin of Sherwood, is likely to be the default mode.

Player Characters in Sherwood: The Legend of Robin Hood are all Human. Along with a range of new Knowledge subskills, it gives a variety of new Edges and Hindrances. Thus for the latter there is Love, the type of love which going to bring a Player Character serious trouble, ‘Maladie Du Pays’, the medieval equivalent of Shell Shock, and Xenophobia, this last probably needing to carefully adjudicated by the Game Master lest it lead to inappropriate play at the table. Alongside various modified Edges, new Background Edges can make a Player Character have the Blood of the Fey, be a Knight of the Order—three are given, Knight Templar, Knight Hospitaller, and Knight Teutonic, or be Landed, for particularly rich characters; Combat Edges include Long Shot and One Shot Left, both useful for the Player Characters who want to be as good at archery as Robin Hood himself; and Social Edges include Quip!, Witty Banter, and Taunt, which all work with the Taunt skill to grant more than one attack per round.

If a campaign does involve magic, then Arcane Backgrounds include Alchemist, Conjurer, Druid, Priest, and Witch, the latter reflecting the period attitudes towards witchcraft rather than modern ones. These are nicely done and mechanically distinct, so the Alchemist concocts his spell effects into potions and the Druid casts rituals which take several rounds. The last Arcane Background is Engineer, which functions more like the Weird Science Arcane Background than magic, and enables  a character to design and build various devices.

Mechanically, Sherwood: The Legend of Robin Hood adds three new options. First, Bennies, the equivalent of Luck or Hero Points in Savage Worlds, are called Swashbuckling Points. Like Bennies, Swashbuckling Points can be used to reroll a Trait Test or Soak damage, but in Sherwood: The Legend of Robin Hood, they can also be used to add a bonus to a Trait Test, increase the success of an Agility Trick to a Raise, and for one or two Swashbuckling Points, depending upon the degree of alteration, a player can alter the story or immediate surrounds to his character’s benefit. Second, Agility can be used to perform Tricks like Attack from Above, Blade Ballet, Running Up Walls, Swinging Attacks, and more, which the players are encouraged to use Swashbuckling Points to set up. Lastly, rules for archery contests, target shooting, including the splitting of an opponent’s arrow, and speed shooting cover the signature elements of the Robin Hood legend.

Besides equipment, Sherwood: The Legend of Robin Hood gives several archetypes, including Engineer, Knave, Man-at-arms, Noble, Priest, and Yeoman, all ready for play. In each case, their role in both the setting and gaming group is discussed, as well as ways in which they might vary. For the Game Master, there is ‘Trouble in Sherwood: Adventuring in Nottingham’, covering various types of campaign, Gritty Outlaws or Political Outlaws, for example. What it highlights upfront is that whatever the type of campaign, a Robin Hood-style campaign should ideally be episodic—which nicely ties back into Robin of Sherwood—and rather than be about combat or facing monsters, should be more like an espionage campaign, involving secrecy and subterfuge. Rounding out the supplement is a set of write-ups for the major figures of  the Robin Hood legend, from Robin Hood himself and Little John to Guy of Gisborne. Lastly, ‘Mythic Sherwood’ guides the Game Master through bringing mythic elements and magic into the setting, the primary advice being to keep the effects of magic subtle, whether real or not. The aim being with the introduction of magic or any of the ‘Legends and Monsters’, from dragons and gargoyles to pookas and banshees, is to avoid the campaign from straying into territory already covered by traditional fantasy gaming.

Physically, Sherwood: The Legend of Robin Hood is a decent little book. It is well written and illustrated with public domain artwork, but it does need an edit in places and the layout could definitely have been tidier. By contemporary standards, it does feel a little too grey and plain in terms of its look, but to be fair, it would not have been greatly improved by being full colour.