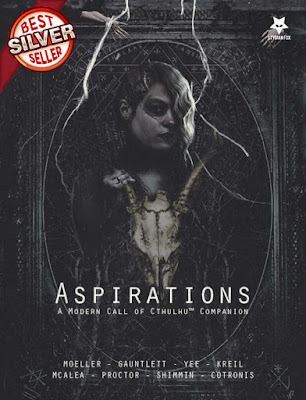 Fear’s Sharp Little Needles: Twenty-Six Hunting Forays into Horror is an anthology of scenarios published by Stygian Fox for use with Call of Cthulhu, Seventh Edition. Published following a successful Kickstarterter campaign, it follows on from the highly-regarded Things We Leave Behind in being set in the modern day, in dealing with mature themes, and in containing contributions from a number of tried-and-tested scenario authors from the last decade or so. What sets it apart though, is that Fear’s Sharp Little Needles contains some twenty-six scenarios, all but one of them, short, sharp stabs of horror—typically each five or six pages in length and thus the length of a magazine scenario or so. All twenty-six can work as one-shots, all but the last can work as convention scenarios, and all but the last require minimum preparation—the latter feature making Fear’s Sharp Little Needles a useful anthology for the Keeper to pull off the shelf at the last minute and have something ready for her gaming group with relatively little effort. In many cases, the scenarios would also work with just the one player and Investigator and the one Keeper. However, with a little more effort, many of the scenarios in the campaign would also work in an ongoing campaign, and in fact, some of them would work with Arc Dream Publishing’s Delta Green: The Role-Playing Game and some of them are actually linked together. Fear’s Sharp Little Needles also has its companion in the form of Aspirations.

Aspirations – A Modern Day Call of Cthulhu Supplement for Fear’s Sharp Little Needles differs from Fear’s Sharp Little Needles in that it is not just a collection of scenarios. It includes both scenarios and articles, adding extra mysteries and strange situations to be investigated, a potential patron, and more, all for the Modern Day. As with Fear’s Sharp Little Needles, each of the nine entries in the anthology is quite short, no more than seven pages in length, but typically four pages in length. All nine are fully illustrated and many of them come with maps too. The anthology opens with ‘All for a Good Cause’ by Jeffrey Moeller. This presents a potential patron for the Investigators, a Hollywood-based charitable organisation, The Barry Crawford Trust. Named for a now dead actor renowned for his hedonism, it is run by his wife, an adult entertainment actress, and has a secret agenda all of its own—its head hates the Mythos! The foundation will secretly fund investigations into strange mysteries and Mythos activities, and even help out with legal fees and help when the authorities are alerted to the Investigators’ inquiries. All that the foundation asks in return is that they hand over any Mythos artefacts and tomes for destruction. However, their contact seems just a little twitchy, and there is more going on here, nicely hinted at with the illustrations which the Investigators might be able to find and so double as handouts, but what ‘All for a Good Cause’ provides is a ready-made patron and the basis of an over-arching narrative structure into which the Keeper can run any modern-set Call of Cthulhu scenario, whether from elsewhere in Aspirations or Fear’s Sharp Little Needles, or indeed, any modern-set campaign.

Jeffrey Moeller follows ‘All for a Good Cause’ with ‘The Blackthorns’. This details Fair Oaks, a popular and highly regarded suburb—easily located to a town or city of the Keeper’s choice—which hides its dark secret behind its obvious idyllic. It suffers from a rash of disappearances, especially child disappearances. Two weeks ago, another boy disappeared, whilst another boy was found unconscious. If the Keeper is using The Barry Crawford Trust as a patron, the foundation sends the Investigators to the suburb to look into the disappearances, suggesting a  potential supernatural link to them. Alternatively, the Investigators might be hired as Private Investigators by the parents of the missing boy. The is some delicacy required here, since it does involve children, but the investigation does present an interesting moral twist upon the Mythos, and in a long-term campaign, that twist might just be too compelling for an Investigator or two. Certainly the Keeper is encouraged to review their actions in past scenarios and campaigns.

Adam Gauntlett provides three entries in Aspirations. The first of these is ‘Dead Mall’, set in and around the dying Diamond Arcade mall in New England, where a blogger charting the region’s dying mall was found dead in the car park of hypothermia on an otherwise warm night. Investigation reveals that the mall is located on site which has been beset by lethally cold weather in the past, so could this death be connected? ‘Dead Mall’ is a short investigation, clues quickly pointing to one of the facility operators in the mall itself. It is likely that the investigation will end in a confrontation and turn physical, so the Investigators will need to be prepared. If using The Barry Crawford Trust, the Investigators’ contact will suggest that witchcraft might be involved.

‘Dead Mall’ is followed by ‘Granny’s Tales’. Rather than a mini-scenario, this details a Mythos tome, but one unlike the traditional ‘bound in unknown leather’, battered, and deeply annotated volume typically beloved of Call of Cthulhu. Granny’s Tales is a seventies adult underground comic, one inspired by artist R. Crumb before it goes off in its own Mythos-inspired direction. Consisting of twelve issues, the early issues are easy to find, but the last one is almost never seen for sale. There are echoes of The Revelations of Gla’aki in Granny’s Tales, in format if not content, and this Mythos tome is nicely detailed and ready to add to a Keeper’s campaign.

The third entry from Adam Gauntlett is ‘The Bay of Nouadhibou’. Again, this is different in being a set-up rather than a full scenario. It will take the Investigators to the Islamic Republic of Mauritania in West Africa where there have been reports of a radical cult operating in the derelicts of the ship graveyard off the city of Nouadhibou. With its mix of religious militantism, slave gangs, immigrant transfers, and Mythos activity on the edge of the Sahara desert, ‘The Bay of Nouadhibou’ is the most suitable entry in Aspirations to use with Delta Green: The Role-Playing Game and it is a pity that this runs to just four pages, as it deserves to be developed into a fuller scenario all of its own.

In Jo Kreil’s ‘Bring Me Your Sick’, William Northfield is dying of cancer and in his search for a cure has begun attending and donating large amounts of money to a health spa where he has been receiving surprisingly effective treatment from its owner, Doctor Baum. The Investigators might be hired by one of Northfield’s relatives or the Board of Directors of his company, either being concerned at the time and wealth that he is pouring into the health spa. The Investigators may benefit having a scientist or doctor involved, or least have one as a contact, but very quickly their enquiries point towards the clinic and a terrible confrontation with Doctor Baum and exactly what he is planning.

Where ‘Granny’s Tales’ detailed a Mythos tome, ‘The Treader of the Stars’ by Brian M. Sammons and Glynn Owen Barrass describes an Alien entity previously presented in their short story, ‘Fall of Empire’ from the Steampunk Cthulhu anthology published by Chaosium, Inc. On the rare occasions it turns its extradimensional attention to earth it whispers secrets into the minds of its cultists who in return build it a body of flesh—from any source. Including mass murder. Once brought to Earth, it enjoys our dimension, causing chaos and rending reality before disappearing again. Along with full stats, the entity is given a detailed description of what it looks like and what it is capable of, which is quite a lot. However, it is not accompanied by any suggestions as to how to use it or scenario hooks, so of all the content in Aspirations, this is not the most immediate of use, or indeed, the easiest

Simon Yee’s ‘Urban Pentimento’ adds another location, this time Japan. This describes Unsu City, a small town which stands in the shadow of Hiroshima and whose secrets are tied into events at the end of World War Two. The town has not just a strange history, but also a Christian of a strange denomination, a satellite office for a German computer company, ghosts lingering from World War Two in the hospital, and a literally underground nightlife… This is a setting waiting for a plot to be developed around it and to it, so will need some development upon the part of the Keeper. It could also have benefited from a map or two.

Rounding out Aspirations is ‘The Lumber Barons’ Ball’ by Chitin Proctor with John Shimmin. This is very much more of a scenario and is very modern in that it involves Kickstarter! Brian Carr successfully funded the first part of his twenties-set horror web comic, Carcosa, on Kickstarter and the second part has been chosen as a Kickstarter Staff Pick, which means that a new interpretation of the King in Yellow will probably be reaching a wider audience. If The Barry Crawford Trust is their patron, then the Investigators will definitely be pointed towards preventing such an occurrence. As well potentially tying in a lost typeface into the Mythos, the scenario provides some solid investigation which the Investigators can do from home before trying to locate Carr at his home in Muskegon, Michigan. Here the investigation is more physical as the Investigators have the opportunity to stay in the converted apartment house and explore the rest of the building as AirBnB guests. The finale takes on the grand affair typical of a scenario involving the King in Yellow, but injects an extra degree of menace and topicality by fronting it as a protest against police shootings. This adds a feeling of freshness to the otherwise decaying and decadent whole affair. Overall, ‘The Lumber Barons’ Ball’ brings Aspirations to a pleasing finish, though some of the content is a little dense and will careful preparation upon the part of the Keeper, and again, it could have done with an extra map or two.

Physically, Aspirations is a slim book, but neatly and tidily presented in full colour with plenty of illustrations and decent maps. In some cases, though, the Keeper will need to provide extra maps herself.

As a companion to Fear’s Sharp Little Needles: Twenty-Six Hunting Forays into Horror, the truth is that Aspirations is not essential. Its content is extra and does not add to or develop the content to be found in Fear’s Little Needles. In some ways, that is a pity. Perhaps The Barry Crawford Trust presented in ‘All for a Good Cause’ could have been expanded to cover how it might involve the Investigators in each of the scenarios in Fear’s Little Needles—or at least those which would have been appropriate. As it is, Aspirations leaves the Keeper to do that and as a result is very much a mixed bag, feeling a little too much like the things that there was no room for in  Fear’s Sharp Little Needles. That is, a decent handful of scenarios, one or two settings or ideas begging for richer development, and some needing development upon the part of the Keeper to be truly useful or usable. Overall, Aspirations – A Modern Day Call of Cthulhu Supplement for Fear’s Sharp Little Needles is more an anthology for the completist than a must-have.