Jonstown Jottings #38: The Gifts of Prax

Much like the Miskatonic Repository for Call of Cthulhu, Seventh Edition, the Jonstown Compendium is a curated platform for user-made content, but for material set in Greg Stafford's mythic universe of Glorantha. It enables creators to sell their own original content for RuneQuest: Roleplaying in Glorantha and HeroQuest Glorantha (Questworlds). This can include original scenarios, background material, cults, mythology, details of NPCs and monsters, and so on, but none of this content should be considered to be ‘canon’, but rather fall under ‘Your Glorantha Will Vary’. This means that there is still scope for the authors to create interesting and useful content that others can bring to their Glorantha-set campaigns. 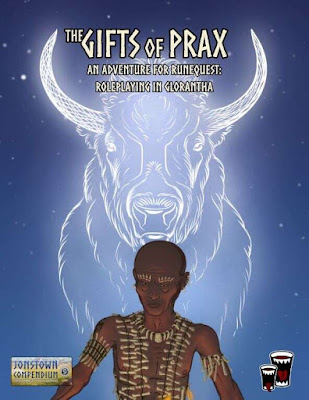 What is it?
The Gifts of Prax is a short scenario set in Prax wherever Shamans may be found.
It is a sequel (or prequel) to Stone and Bone.

The Gifts of Prax is well presented with decent artwork and clear maps. It needs a slight edit in places.
Where is it set?
The Gifts of Prax is set in Prax amongst the Straw Weaver Clan of the Bison tribe during the wet season. Notes are included to enable the Game Master to set it elsewhere.
Who do you play?
Praxians who are members of the Straw Weaver Clan. A shaman may be useful, as well as a mix of genders amongst the Player Characters. Notes are included to run the scenario using other character types, including non-Praxians.
What do you need?
The Gifts of Prax requires RuneQuest: Roleplaying in Glorantha. Access to the RuneQuest: Glorantha Bestiary may be useful, but is not essential to play.

Is it worth your time?
Yes—The Gifts of Prax is a well written, entertaining, and challenging scenario if you are running a campaign set amongst the Tribes of Prax. Especially if the Player Characters include a shaman amongst their number.
No—The Gifts of Prax is set in Prax, and if your campaign is not set in Prax, then the scenario is harder to use, especially as the time of year and the environment plays a strong role.
Maybe—The Gifts of Prax is potentially flexible enough to be set elsewhere away from Prax, but the Game Master will develop much of the geography and details herself to successfully adapt the scenario.
Posted by pookie at 12:00