Houses of Horror I 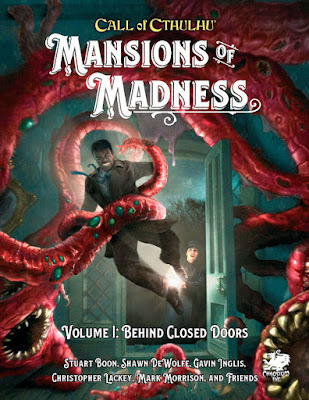 Mansions of Madness – Vol. 1: Behind Closed Doors opens with a little bit history and explanation before diving straight into a classic scenario. Shawn De Wolfe’s ‘Mister Corbitt’ takes place in the well-to-do neighbourhood where one of the Investigators, or his family live. One Sunday afternoon, this Investigator sees his neighbour, the eponymous Mister Corbitt, drop something as he returns home—something ghoulishly unpleasant and disturbing. The question is, where did it come from and what is the mild-mannered, well-regarded, and indeed, neighbourly man going to do with it? Suitable for one or two Investigators, as well as larger groups, ‘Mister Corbitt’ will probably see the Investigators following the neighbour, looking into his backstory, and ultimately breaking into his house. What they find inside is truly disturbing and weird, setting up some entertaining set pieces within the Corbitt residence. There is a pleasing sense of self-containment to ‘Mister Corbitt’. This is a small scenario, but it has everything that the Keeper needs, whether that is advice on how to run Mister Corbitt—typically to nudge the Investigators into action, involving the Police, or what happens if things break loose. The scenario’s scale also  makes it easy to use as a side-scenario or expand it out into a series of scenarios if the Keeper so desires. The scenario is also easy to adjust to other countries or time frames. Lastly, should the Investigators delve deeply into the scenario, they will discover that there is more going on, and that perhaps the villain of the piece may not necessarily be who they think it is. Overall, ‘Mister Corbitt’ is a straightforward scenario, but very much a classic which deserved to be updated to Call of Cthulhu, Seventh Edition.

‘The Crack’d and Crook’d Manse’ is the second scenario to be included in Mansions of Madness – Vol. 1: Behind Closed Doors from previous editions of the anthology. Originally written by the author, Mark Morrison, for a convention in 1984, the scenario is set in 1925 and has the Investigators hired by a small-town firm of lawyers to investigate a property in out-of-way Gamwell belonging to one of their clients. This is the explorer and archaeologist, Arthur Cornthwaite, who is also missing. There is some history to the house to be discovered, much of which will add to the creepy, damp sense of desolation which permeates throughout its walls and halls. Although the  Investigators will have to deal with the insular nature of some of Gamwell’s inhabitants, they will spend most of their time examining and exploring the house, trying to work out what happened to Arthur Cornthwaite. The scenario includes solid advice for the Keeper, some fun events for her to throw at the Investigators, and overall, is an entertaining twist upon both the haunted house genre and the Mythos—veteran players of the game who have not played ‘The Crack’d and Crook’d Manse’ may quickly deduce the Mythos threat, but the likelihood is that they would be wrong.

The first of the three new scenarios in Mansions of Madness – Vol. 1: Behind Closed Doors is Chris Lackey’s ‘The Code’. If the first two scenarios in the collection are intended to be intermediate scenarios for Call of Cthulhu, Seventh Edition, it is fair to say that ‘The Code’ is a step up in terms of complexity. This is because it is a Science Fiction horror scenario and because it involves time travel. The Investigators are summoned by a former colleague or teacher, the physics professor, Doctor Kenneth Connelly, to his home because he has made a scientific breakthrough. By the time they arrive at his home, the Investigators will already have been warned that something is amiss, but exactly what is another matter. What they discover is that Doctor Connelly has invented a ‘time suit’, but it is not functioning. There are Mythos elements to ‘The Code’, but the scenario mostly focuses on NPC interaction with the Investigators and there is quite a varied cast the Keeper has to portray. A couple of them do feel extraneous and do add to the Keeper’s workload during play, though there is good advice on how to portray the antagonists. This is in addition to the time travel elements which the Keeper has to handle, and this is where the scenario becomes complex. Along with numerous time-related encounters, the Keeper has to cope with the potential consequences of the Investigators’ actions once the scenario’s time travel comes into play, and adjust the narrative as necessary. There is some advice to that end and beyond the limits of the story, ‘The Code’ could take a Call of Cthulhu campaign in a very odd direction.

‘The Code’ is followed by ‘The House of Memphis’ by Gavin Iglis. The Investigators are hired by lawyers to look into the disappearance of their client, the noted stage magician, Memphis the Great, who has not been seen at his house for over a month, and into the strange deaths of three burglars in the weeks since. Alternatively, for Investigators with criminal connections, a local crime boss will ask them to look into the latter. There is a minor tradition of stage magicians and the Mythos and of strangely inexplicable stage performances (though mostly connected to the Yellow Sign, but not here) in Call of Cthulhu, and ‘The House of Memphis’ is no exception to that tradition. The scenario even adds a new Occupation, that of Stage Magician, as well as a lengthy description of the new skill, Art/Craft (Stage Magic), which the Investigators are likely to need a little of, since they will need to enter the world of stage magicians—though only as amateurs—to learn some of the background to the mystery. The Keeper will also need to understand how the skill works and will probably want to learn how a few card tricks and the like work to give some colour and detail to the Investigators’ interactions with the actual stage magicians they will meet—amateur and professional.

The scenario’s initial investigation is primarily interpersonal in nature and that does mean that the scenario has a large cast for the Keeper to portray, and again, not all of them are truly necessary to the plot. With its plot of protegee-turned rival and devoted magician’s assistant, ‘The House of Memphis’  does feel a little familiar in places, but the scenario is decently put together and there are plenty of opportunities for roleplaying and investigation before the horror really kicks in. Overall, ‘The House of Memphis’ is a solid scenario, especially if the Investigators include a stage magician amongst their number.

The last scenario in the anthology is ‘The Nineteenth Hole’ and is the only scenario set outside of the USA. As its title suggests, it takes place on a golf course and being set in Scotland, it seems only appropriate that it should be by Stuart Boon, the author of Shadows Over Scotland: Call of Cthulhu Roleplaying in 1920s’ Scotland. The investigators are hired by Crystal Macmillan, whose husband, Arthur, a retired publisher, has not been since he visited the golf course he was having restored. The police have shown little interest in his disappearance and the workers at the golf course, many of whom complained of suffering headaches and feeling sick during the restoration work, have little to say either. Again, the scenario involves a lot of interpersonal investigation, first at the Macmillan residence, then in the village and perhaps elsewhere, before proceeding onto the grounds of the golf course and into the club house itself. Here it continues the exploration theme which has been running through all of the scenarios in Mansions of Madness – Vol. 1: Behind Closed Doors, though of course, specifically exploration of a house, but the change of venue is refreshing. In comparison to the description given to some of the houses in earlier scenarios there is more detail to the clubhouse in ‘The Nineteenth Hole’ and it very much benefits from it. ‘The Nineteenth Hole’ does come with a sizeable cast, but unlike some of the other scenarios, does not overburden the Keeper with them. These NPCs are all nicely done though, as is the advice for the Keeper, which includes a few red herrings and nasty encounters to throw at the Investigators. The scenario also includes some entertaining, almost Inception-like encounters which are likely to surprise and confound both players and their Investigators. The second Science Fiction horror scenario in the anthology, with a fairly obvious inspiration in the form of H.P. Lovecraft’s ‘From Beyond’, ‘The Nineteenth Hole’ presents another entertaining twist upon the haunted house (haunted clubhouse?) genre, one that is nicely constructed and feels weird and unsettling rather out and out scary. Of the three new additions in Mansions of Madness – Vol. 1: Behind Closed Doors, ‘The Nineteenth Hole’ is the most satisfying.

Physically, Mansions of Madness – Vol. 1: Behind Closed Doors is as well presented as has become standard for Call of Cthulhu, Seventh Edition. The artwork is not always as good as it could be though, and it does not always match the descriptions in the text. One consequence of the switch to full colour is that some of the really great black and white artwork has been left behind in previous editions. The maps are clear, but many feel as if they could do with more detail, especially the contents, which are often left up to the Keeper to describe. One nice touch is that every scenario includes suggestions as to which skills might be useful if the players are creating their Investigators specifically for the scenario and notes towards potential sequels depending upon how the events of each scenario played out.

Chaosium, Inc. could have simply reprinted Mansions of Madness: Five Frightening Adventures in Dark and Deserted Places or Mansions of Madness: Six Classic Explorations of the Unknown, the Deserted, and the Insane, and with some adjustments, that would have been fine. It would not though, have been interesting. With Mansions of Madness – Vol. 1: Behind Closed Doors, the publishers provide Keepers and players of Call of Cthulhu, Seventh Edition with something old, scenarios which very much deserved to be updated and showcase those new to the game why they have always been regarded as classics, and something new, for veteran Keepers and players and those new to the roleplaying game. The choices are all good in either case, and they also lay the groundwork for further volumes in the series, each bringing back classics from editions past alongside the new. Overall, Mansions of Madness – Vol. 1: Behind Closed Doors is a solidly scary set of scenarios, showing off the new, whilst remembering the past.