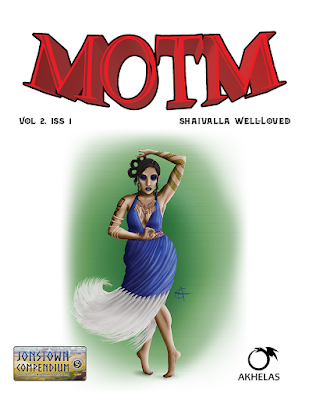 What is it?
Shaivalla, Well-Loved presents an NPC for use with RuneQuest: Roleplaying in Glorantha.
It is a nineteen page, full colour, 1.67 MB PDF.
The layout is clean and tidy, and its illustrations good.

Shaivalla, Well-Loved is nominally set in Sartar, but the NPC and her entourage can be encountered almost anywhere the Game Master decides.

Who do you play?
No specific character types are required to encounter Shaivalla, Well-Loved.

What do you need?
Shaivalla, Well-Loved requires RuneQuest: Roleplaying in Glorantha as well as the RuneQuest: Glorantha Bestiary. In addition, The Red Book of Magic will be useful and Shaivalla, Well-Loved can also be tied into The Pegasus Plateau & Other Stories.
What do you get?
The second volume of ‘Monster of the Month’ presents not monsters in the sense of creatures and spirits and gods that was the feature of the first volume. Instead, it focuses upon Rune Masters, those who have achieved affinity with their Runes and gained great magics, mastered skills, and accrued allies—corporeal and spiritual. They are powerful, influential, and potentially important in the Hero Wars to come that herald the end of the age and beginning of another. They can be allies, they can be enemies, and whether ally or enemy, some of them can still be monsters.
The inaugural entry is Shaivalla, Well-Loved, which details a power-hungry, revenge-driven priestess of Ernalda, including her background, motivation, magical items and allies, and her retinue, accompanied by their statistics and full NPC sheets for each. Shaivalla, Well-Loved is an expatriate Sartarite, a member of the Locaem Tribe’s ‘royal’ clan, the Salvi, whose family was forced to flee south into Heortland following the Lunar occupation. After time spent in Esrolia, she has returned to her homeland a Priestess of the Earth, but not to her tribe, many of whose leaders she cannot forgive for their cooperation with the Lunar occupiers. Instead, she and her retinue wander Sartar, looking for allies, lovers, and anyone who might support her campaign against those she regards as traitors.
Shaivalla, Well-Loved is presented as both enemy and ally. She is cunning and Machiavellian, preferring to work behind the scenes rather than directly confront her enemies, working her way into the local cult of Ernalda and coming to influence a clan’s leadership—whether that is against the aims or beliefs of the Player Characters, or in line with them. To that end, four adventure seeds are included, some of which are easier to use than others, all of which will require development upon the part of the Game Master to some varying degrees.
Alongside the full stats for Shaivalla, Well-Loved, there are details of each of her bound spirits and the major members of her retinue. These feel a little underwritten in comparison, especially the Initiate of Eurmal the Vain, who is along for Shaivalla’s amusement and as a disruptive influence. Lastly, there is a full write-up of a magical artefact, ‘Lengarthen’s Head’, done in the style of Treasures Of Glorantha: Volume One — Dragon Pass. This grants the Ernalda priestess a powerful advantage should events turn against her and which should confound the Player Characters should they think that they have defeated her—at least the first two or three times… Thus she can become a recurring villain.
Although discussion of Shaivalla’s tactics—in and out of combat—are discussed, her long-term plans are not quite as detailed and possibly an outline of her campaign against Aritha, the High Priestess of the Three Emeralds Temple of the Locaem could have been useful. One definite omission is an illustration of ‘Lengarthen’s Head’.

Shaivalla, Well-Loved will definitely need some development upon the part of the Game Master to bring into her game, she should have both roleplaying her and developing her devious plans. However, the NPC it presents will easily play upon any hatred the Player Characters have for the Lunar Empire, and for those who do not, potentially lead to a potential rift between the Player Characters, and thus dynamic storytelling.
Is it worth your time?
Yes—Shaivalla, Well-Loved presents a devious, potentially disruptive presence in a campaign, one that potentially could lead to war against another clan—rival or not—especially if the Player Characters have a dislike of Lunars, and dynamic storytelling if they do not.
No—Shaivalla, Well-Loved presents a devious, potentially disruptive presence in a campaign, and whilst there is potential for dynamic storytelling, the Game Master may not want the playing group of her campaign so disrupted so.
Maybe—Shaivalla, Well-Loved presents a devious, potentially disruptive presence, especially in a Sartar-set campaign, but she does need a degree of development to work effectively.
Posted by pookie at 12:00