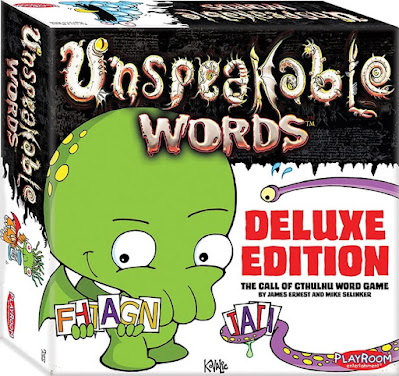 Unspeakable Words — The Call of Cthulhu Word Game is a word game with difference. Most word games require each player to spell out words and then score points based on things like their frequency of use or complexity of use. This game—originally published by Playroom Entertainment in 2007, and given a ‘Deluxe Edition’ in 2015 following a successful Kickstarter campaign, gives the word a Lovecraftian twist. In Unspeakable Words a player spells out words, perfectly ordinary and not at all Eldritch, but scores points based on the number of angles in the letters in the word so spelled. The first player to score a total of one hundred points wins. However, there is a catch. The more angles there are in a word spelled, the greater the likelihood of the Hounds of Tindalos using the angles to ease themselves out of time and so drive a player insane. Fortunately, this is only temporary, and a player can still continue spelling out words in an effort to win the game. If it happens five times though, a player is driven permanently insane and is out of the game.

And that pretty much sums up Unspeakable Words — The Call of Cthulhu Word Game, a card game designed for between two and eight players, for ages ten and up. Unspeakable Words — The Call of Cthulhu Word Game Deluxe Edition comes with one-hundred-and-forty-eight Letter Cards, a glow-in-the-dark twenty-sided die, forty Cthulhu Pawns in eight colours, a dice bag, and a four-page rules leaflet. The Cthulhu Pawns are cute, and serve as each player’s Sanity Points; the art is drawn by John Kovalic throughout, giving the game a consistently cute look; and every Letter Card is accorded a score for the number of angles in the letter and illustrated with a creature or entity of the Mythos. So ‘S is for Shub-Niggurath’ and scores no points because it has no angles, but ‘A is for Azathoth’ and scores a player five points because it has lots of angles!

On a turn, a player has seven cards with which to spell out a word. He cannot spell out proper nouns or abbreviations or acronyms, but he can spell out multiples. Once every player has accepted the word, the spelling player totals the value of its angles and attempts to save against their sanity-draining effect. This requires a roll equal to or over the value of angles on the game’s die. If the player succeeds, the word is accepted and its score added to the player’s running total. The player then refreshes his hand. Once a word has been accepted, it cannot be spelt out again by another player, though if it has a multiple, that could. Once used, that word  cannot be spelled out again during the rest of the game.

If the spelling player fails his roll by rolling under the value of angles, the word is still kept, but the player loses a Cthulhu Pawn. Once he runs out of pawns, he is out of the game. At just one Cthulhu Pawn, a player can use his Letter Cards to spell out any word, no matter how weird or Eldritch it might be. The point is, is that with just the one Cthulhu Pawn, the player is disturbed enough to find any word acceptable even if others cannot.

And that really is it to Unspeakable Words — The Call of Cthulhu Word Game.

There are a couple of small quirks, though. The first is that the ‘Push Your Luck’ element of a player testing his Sanity means that a player must balance the need to gain the points from his word against the likelihood of failing the Sanity check! The second is that this balance will tip towards lower and lower word values as a player’s Sanity drops lower and lower. Then there is fun of being insane and being able to spell of almost any meaning the player wants from the Letter Cards in his hand. Which is even more fun if the player can define what the word actually means! Lastly, it is clear that the designers and artist John Kovalic have delved deep into the Lovecraftian mythos, for some of the cards are obscure, such as ‘Kaajh’Kaalbh’ and ‘R is for Rlim Shaikorth’, alongside the more obvious ‘C is for Cthulhu’ and ‘N is for Nyarlathotep’. The most knowing card is ‘H is for _____’. Or should that be ‘H is for _____’, ‘H is for _____’, ‘H is for _____’?

There are two downsides to Unspeakable Words — The Call of Cthulhu Word Game. One is player elimination, but fortunately, the game is short enough and since player elimination is likely to happen towards the end of the game, that no player is going to be out of the game for very long. The other is the price. Unspeakable Words — The Call of Cthulhu Word Game is  relatively expensive for what is a short filler. That said, this is the deluxe version of the game and it looks very nice.

Unspeakable Words — The Call of Cthulhu Word Game Deluxe Edition is a solid, fun filler. Amusingly illustrated, it presents an entertaining, eldritch twist upon the spelling game that will be enjoyed by family and hobby gamers.