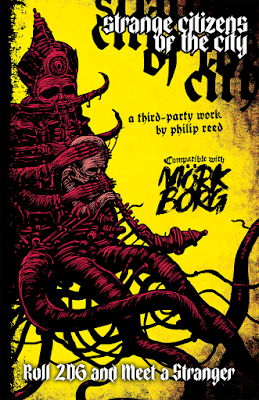 Lastly, ‘Places in the City’ describes various locations. These include ‘Harbold’s Raceway’, a crumbling arena where the city watch once trained, but is now a drinking and gambling den where races of all sorts are held, on all manner of beasts and mounts, including fan-favourite, Uudo Kuusk and his six-legged biomechanical undead creature built by Roland Repnik. At ‘Yesterday’s Lost Wares’, the wooden golems will push to make a deal over any and all of the goods on sale in this two-storey pawnshop, whilst ‘The Statue of the Defeated Dragon’, a piece of public art considered so wasteful that both the artist and the city official who commissioned were cornered and murdered, has become a meeting for thieves, though in certain light, the statue is so life-like that the unwary might believe it to be an actual red dragon!
Physically, Strange Citizens of the City is very nicely presented. Although it makes strong use of colour, it uses a softer palette than Mörk Borg, so is easier on the eye. The artwork throughout is excellent.
Strange Citizens of the City is a set in some strange city where twisted men and women and other things lurk in the side streets, where great evil hides behind populism, and arcanotech is put to dark uses. Although intended for use with Mörk Borg—and it shares the same doom-laden sensibility—the contents of the fanzine would work with any retroclone or be easily adapted to the roleplaying game of the Game Master’s choice. However, they do all feel as if they live in the same city, a city waiting to be detailed. Perhaps a city that Philip Reed Games could detail in a future fanzine? In the meantime, Strange Citizens of the City is an entertaining and useful collection of NPCs for the Grimdark roleplaying game of the Game Master’s choice.
Posted by pookie at 12:00