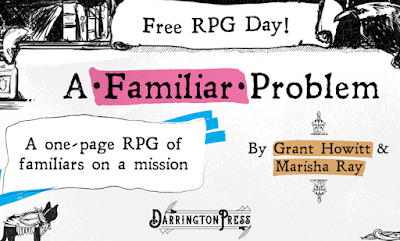 Without a doubt, the slimmest of offerings for Free RPG Day 2022 is A Familiar Problem. There is good reason for that. It consists of a single sheet of light card, done in black and white on the one side and in full colour on the other. The full colour side consists of adverts for other releases from the publisher, Darrington Press, most notably, Tal’Dorei Campaign Setting Reborn, the supplement for Dungeons & Dragons, Fifth Edition, based on the Critical Role YouTube campaign setting. Which is a bit strange. Strange because it is the adverts which get the colour and so take attention away from the roleplaying game on the other side. Strange because if Darrington Press had instead released a quick-start or a scenario for Tal’Dorei Campaign Setting Reborn for Free RPG Day 2022, then it might have got a whole lot more attention than A Familiar Problem is likely too. Putting that aside, what you get with A Familiar Problem is either a flyer with a mini-roleplaying game on the back or a mini-roleplaying game with a lot of advertising attached. Take your pick.
A Familiar Problem is a one-page roleplaying game in which the players take the roles of wizards’ familiars. Their masters and mistresses are away on an adventure and left them behind. Having been forgotten about them, they decide to have an adventure of their own and so prove to their owners that are useful and perhaps worth taking along on the next adventure. A Familiar might be a bat, a crab, an owl, a rat, a raven, and others. Each Familiar has four attributes—Clever, Fierce, Sly, and Quick, and a BREAK like Paranoia or Narcissism. The attributes range in value between zero and three, whilst the Break represents atypical behaviour if the Familiar acquires too much Stress. Each Familiar also knows three pieces of Pocket Magic, three spells such as Butterfingers, Door Magic, or Summon Horse. These are single use spells. To create a Familiar, a player rolls or chooses from the table of twelve and then does the same for his Familiar’s spells.
Lizzie the Lizard
Clever +0, Fierce +1, Sly +2, Quick +2
BREAK: Cowardice
Pocket Magic: Limited Invisibility, Soak, Speak with Object
When a Familiar wants to undertake an action in A Familiar Problem, his player rolls a ten-sided die and adds the value of an appropriate Attribute to the result of the die roll. The aim is roll equal to or higher than a Difficulty Number, which ranges from five or Easy to Very Difficult or ten. If the roll is failed, the Familiar gains a point of Stress. Subsequently, each time a player rolls for a task and rolls under his Familiar’s Stress, his Familiar’s Break occurs. Then the player has to roleplay that behaviour until the other Familiars calm his Familiar down and rescue him from the situation which triggered it.
As to what the Familiars do, there is a set of three of tables, one for generating the mission and two the adventure location. For example, ‘Sabotage the villain’s scheme in the Opulent Castle’. And that is it… The rest of it is left up to the Game Master to make up, perhaps with some input from her players, for example, whatever the villain’s scheme might be, and then play out. Which should take no more than a single session—and probably a short session at that.
A Familiar Problem is plain and simple. Whether that is physically, conceptually, or playfully. One of the best features of the simplicity is that it is easy to teach, is suitable for some younger players (depending how far they can cope with the BREAK rules), and requires no preparation. The only thing that it really requires is the ten-sided die and a Game Master happy to make things up and help tell the story.
Posted by pookie at 18:00