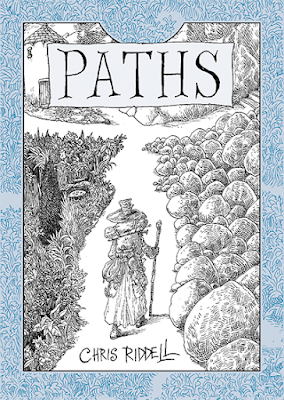 Maps form such a fundamental part of our gaming experience. We explore them. We journey across them. We delve into them. We defend them. We attack them. We draw them. We create stories using them. We have been gaming maps for centuries, whether it is to conduct wargames like Kriegsspiel or H.G. Wells’ Little Wars, or more recently explore great dungeons such as B2 Keep on the Borderlands or sprawling sandboxes such as X1 Isle of Dread, or even create a community and its history with a game like The Quiet Year. There is also something else that we can do with maps and that is contemplate, and it is something that Paths does. Designed and drawn by the British Children’s Laureate, children’s book illustrator and author, and political cartoonist, Chris Riddell, Paths is the first game to be published by Betonmond. Or rather it is the first game published by Betonmond that is not a game, although it could be if you wanted.

Paths consists of fifty-two, large one-hundred-and-twenty-five by eighty-five-millimetre cards. Each depicts a landscape crisscrossed by one or more paths. A steep path leads up a hill to a round tower with a single door. A statue of a mermaid sits in the middle of a plaza around which stand a pyramid, a column, and other features. Paths cut through tunnels in the hills. A narrow path joins a junction surrounded by tall, narrow houses. A village sits atop a cliff overlooking a tower below. A field is divided by several routes, but leaves a single tent isolated. An abyss is encircled by the paths. A great viaduct crosses over a valley path. Paths connect to steps that descend to a single platform over a chasm or seemingly connect at random underneath a house that hangs from a wall. Who lives in the tower? Who was the mermaid? What lies in the tunnels? Who lives in the village and where does the narrow path lead? Why is the village higher than the tower? Who lurks in the abyss? What is the platform over the chasm used for? Who lives in the home hanging from the wall? These are just some of the questions that the cards in Paths provoke.

All of the cards are beautifully bucolic and are designed to form a grid, depicting an ever-greater area and range of terrain. As a deck they can be shuffled, cards drawn and laid out to form a whole map, and then done again and again to create new maps each time. Paths suggests that two cards be selected to mark the beginning and the end of a route, and then cards be drawn to map out the route between them, whether direct or meandering. The participant is encouraged to examine each card, asking what it makes him think of or how he feels? The process is intended to be contemplative, even meditative, the participant almost taking a walking holiday across his loving room table.

Lastly, Paths turns the participant into a player and the map cards into a game. It is suggested the map is built collaboratively with perhaps one player as the map-maker who knows the secrets behind each card and location to be revealed as the other players and their heroes add each card to the map. It is suggested that tokens be used and notes taken and dice be used for dice-battles—if needed. These are the limits of the suggestions in Paths, but it would be incredibly easy to import a set of simple rules or even create some. For example…

Physically, the cards in Paths are large, glossy, and feel good in the hand. The leaflet runs to four pages and is a quick and simple read.