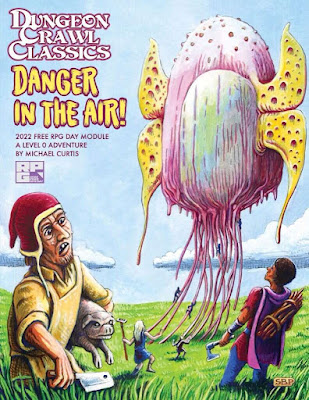 Goodman Games provided two titles to support Free RPG 2022. The first was The Three-Wizard Conundrum, an entertaining scenario for Dungeons & Dragons, Fifth Edition, much in the mode of The Dying Earth stories by Jack Vance. The other was an adventure for the Dungeon Crawl Classics Role Playing Game, as you would expect, highly anticipated. Free RPG Day 2022 – Dungeon Crawl Classics: Danger in the Air is a Character Funnel, one of the features of both the Mutant Crawl Classics Roleplaying Game and the Dungeon Crawl Classics Role Playing Game—in which initially, a player is expected to roll up three or four Level Zero characters and have them play through a generally nasty, deadly adventure, which surviving will prove a challenge. If one or more of the Player Characters survive—and the players may need to share some of their surviving characters if one or more players get theirs killed—then they will have each acquired the sufficient Experience Points necessary to rise to the heady heights of First Level. In the process, they will gain a Class and all of its benefits.
Free RPG Day 2022 – Dungeon Crawl Classics: Danger in the Air begins with a strange occurrence. As the villagers look up, they see a strange alien creature drifting in the air above their homes, its translucent body rent with weeping wounds. Within its body can be seen a structure and from one damaged corner gold and other treasure glints, even as the occasional trickle of alien, though doubtless gold, coins rains from the sky. Already, other villagers have scavenged treasures beyond their imagination from the blobs of alien flesh which have fallen from the sky, but there is surely more—much more—to be found inside the odd combination of jellyfish with butterfly-like wings? Fortunately, there is an easy way up. Numerous tentacles and tendrils dangle from its underside, and if some brave souls can climb their length, there has to be a way inside. After all, how else did the treasure get there otherwise? There are certain to be dangers too, but any man, woman, elf, dwarf, or halfling, armed only with a stick or a pig or a piece of overly fragrant cheese, brave enough to make the climb and explore the strange structure is destined for better things.
Getting into the strange floating object is relatively easy and what the Player Characters discover is not one, but two weird combinations. The first is that of Science Fiction and fantasy, though actually, more the former than the latter. The second is strange biology with technology. This will be apparent to the players of course, but not their characters, for whom Clarke’s Third Law—“Any sufficiently advanced technology is indistinguishable from magic.”—definitely applies. This is because the object turns out to be an advanced interdimensional spacecraft which suffered a catastrophic encounter and with its occupants dead, drifted into the Player Characters’ world. It also means that there are a lot of strange devices and objects which the Player Characters can interact with to various effects. The adventure consists of just eleven locations across three floors, and it should no surprise that each includes lots of detail that the Judge can use to bring the adventure location to life.
A playing group should be able to play through Free RPG Day 2022 – Dungeon Crawl Classics: Danger in the Air in just about a single session. If any of the Player Characters survive long enough to discover and return with the treasure its vault holds, then they will be surprisingly wealthy as well having sufficient Experience Points to each First Level. The Judge also has a hook or two which she can develop into a possible sequel. Hopefully, Goodman Games will return to the story in a sequel to Free RPG Day 2022 – Dungeon Crawl Classics: Danger in the Air.
Physically, Free RPG Day 2022 – Dungeon Crawl Classics: Danger in the Air is slightly disappointing as it is not quite up to the standards usually set by the publisher. In places the writing is rushed and the map, whilst clearer than in other releases for the Dungeon Crawl Classics Roleplaying Game, is mislabelled. The artwork is excellent and entertaining though.
Free RPG Day 2022 – Dungeon Crawl Classics: Danger in the Air is a thoroughly entertaining scenario. It definitely offers a fun session of roleplaying mind-boggled villagers just trying to work what they have themselves into and wondering if they are going to be able to get out again.
Posted by pookie at 18:00