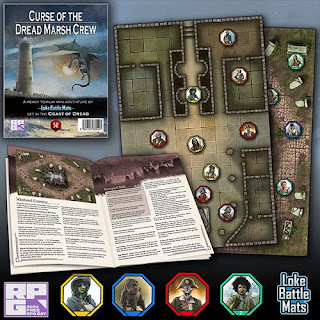 Curse of the Dread Marsh Crew is an adventure for Dungeons & Dragons, Fifth Edition. Published by Loke BattleMats, a publisher best known for its maps for roleplaying games, such as The Towns & Taverns Books of Battle Mats, The Wilderness Books of Battle Mats, and The Dungeon Books of Battle Mats, the scenario takes place in the same setting as the Box of Adventure 2: Coast of Dread. It involves pirates, a cemetery, a curse, and undead in short encounter which easily be played in a session. It comes with four pre-generated Player Characters of Second Level as well as a doubled-sided map and a sheet of counters, both on heavy cardboard. The adventure involves a good mix of combat, interaction, and a big puzzle, and is highly thematic, but in terms of its plotting, it needs a bit work.

In Curse of the Dread Marsh Crew the Player Characters are members of the privateer, Dread Marsh, who have been sent on a mission by the ship’s quartermaster, Axell. They were to acquire the Emerald Eye, a great gem, said to be held in the tomb of the legendary pirate, Foxbeard, which is in the Windward Cemetery. As the scenario opens, with Axell’s advice, they have successfully entered the tomb and exited with the Emerald Eye in hand. Yet as soon as they make their exit, the tomb entry slams shut, a mist surrounds the cemetery, and their very flesh begins to rot. It appears that they have been afflicted by the ‘Curse of the Black Mark!’

So the Player Characters begin the scenario being dead! Which brings with it a host of problems—terrible speech, looking and smelling like a zombie, a vulnerability to Radiant damage, and being unable to benefit from any type of Rest, as well as being unable to leave the cemetery. Their first problem though, is that the cemetery watchman along with his dog, Snuffles, arrives to keep an eye on the place overnight. Fortunately, he is short-sighted and so will not spot that they undead so easily. This is not the only difficulty the Player Characters will face as a torch and pitchfork-wielding mob will turn up from the nearest village, but for either encounter, there are plenty of options detailed, so the players can approach them in numerous ways, not necessarily via combat. Similarly, the two locations of the scenario—Windward Cemetery and Foxbeard’s crypt—are both nicely detailed.

In the second part of the scenario, arcane symbols light up around the entrance to Foxbeard’s Crypt. These are part of puzzle which must be solved before the Player Characters can get back into the crypt, but surely, they would have solved that when they broke into the tomb the first time? Inside, they face Foxbeard himself, wanting revenge for their having stolen the Emerald Eye, as well as members of his undead crew. Also, why did Foxbeard not rise and take his revenge when they were they broke into the tomb the first time? The obvious solution would be for the Player Characters to have been brilliant when they originally plundered the tomb and not disturbed the dread pirate in his final resting place  and then forgotten the solution to the puzzle as a result of their suffering from the ‘Curse of the Black Mark!’ The Dungeon Master may instead come up with a solution of her own, but either way, it is a problem in terms of the narrative.
All the while this is going on, the Player Characters are under the effects of the ‘Curse of the Black Mark!’. If they kill anyone in the cemetery—and there is a warning to found if they search the cemetery—the Black Mark on their hand will grow. Kill too many persons and the Black Mark will grow and grow until they are permanently transformed into one of the undead. There is a means to lift the curse to be found, but that means entering the tomb of course.

The four Player Characters include a Fighter, a Rogue, a Warlock, and a Wizard, all Second Level. All come with a back story, a thumbnail portrait, and a tracker for the ‘Curse of the Black Mark!’. The latter s nicely done as a hand, but there are no other mechanical effects as the Black Mark grows. It might have been fun if there had been to help enforce a sense of impending doom if there had been.

Physically, Curse of the Dread Marsh Crew is decently presented. The scenario booklet is general, well written and laid out. It lacks a card cover and so is flimsy. The double-sided map is done on sturdy card and in full colour. One side depicts the cemetery and the entry to the tomb, whilst the other shows the tomb proper. Both maps are easy to use with either the included counters, or with miniatures if the Dungeon Master and her players have them. The counters are decently done, but do need to be cut out carefully.

Curse of the Dread Marsh Crew is potentially a lot of fun and it takes the classic combination of pirates and the undead and does something different with it. The scenario also contains some nicely scenes as a consequence, such as making friends with a dog when you appear to be undead and persuading a baying mob that you are actually alive. Whilst the scenario can be played straight as written, it does have some plot holes which the Dungeon Master will have to fix to really bring out the fun to be had in Curse of the Dread Marsh Crew.
Posted by pookie at 12:00