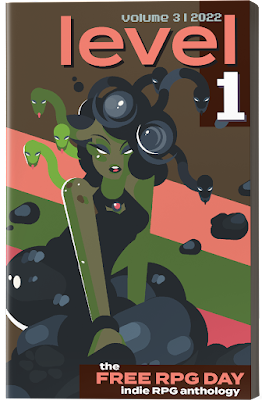 ‘One Night at Bain House’ by Monica Valentinelli is another one-night affair, but a more interesting and playable game than the earlier ‘Judas, a dinner party’. The Player Characters are guests at a surprise costume ball, which turns out to be the revenge of monsters tired of being hunted. They turn the Player Characters into monsters, but which? Their aim is to determine which monster they are, exploring the house to reveal further secrets, expose invisible threats which plague all of them, and eventually find the cure. The game is diceless, so can be played anywhere with the losers of any actions temporarily taking over the role of Game Master to handle threats. It is also intended to be flexible, so it could be a co-operative game or an adversarial one, and so on. Overall, one of the more detailed and explained designs in the anthology.
‘Maenads: A Savage Sisters Sheathe’ by Adriel Lee Wilson is an option for the Savage Sisters roleplaying game. The Maenads are actors, acrobats, singers, and performers of daring feats who travel the land performing and entertaining, whilst also ferreting out secret injustices which they put right. This puts a colourful spin upon ‘Savage Sisters: Heroic Women Against a Barbaric World’, which can be found in the pages of LEVEL 1 - volume 1 2020. ‘Vessel’ is another two-player game. Designed by Kyle Ott and Desks and Dorks, one player takes the role of the Vessel, perhaps a family figure or a reformed criminal, whilst the other is the occupying Entity, an Alien Implant or Eldritch Parasite. They take turns being the Game Master as the other attempts to achieve a goal, so the game swings from the ordinary to the outré and back again. Throughout, both will be forced to evaluate the other and the relationship they have with each other. The result is that they create two entwined stories in an odd, almost sitcom-like buddy movie.

Naturally, ‘Gods of Rock’ by Patrick Watson & Nat Mesnard of Oat & Noodle Studios turns up the sound to eleven in a post-apocalyptic confrontation between two classic rock (music) gods who have been friends and enemies forever. The confrontation switches between duel and performance and back again, in far more effective fashion then the earlier ‘Battle of the Bands’. Dare Hickman’s ‘The Slate: A Game of Creation and Destruction’ is a storytelling game of creation of a world, populating it, filling it with life, destroying it, and so on. It is a short, one session game which progresses to a Final Judgement, an enjoyably sweet exercise in creation and destruction. It is difficult to describe ‘The Stars Were Many’ as a game exactly. V. R. Collins’ design is a solo game in which the player races to save the falling stars from their constellation. It is all done to a time limit in which the player draws cards to plot the movement of his stars to get them into alignment once again. It can be best described as more timed puzzle than a game.
Alexi Sargeant’s ‘To Wield the Blade of Ages’ has an enjoyably mythic quality. The players take the roles of Claimants to the Blade of Ages, come before the Swordkeeper to state their case as to why they should wield it next, as well working to undermine the claims of their rivals. Each Claimant will extoll his virtues and his glories, whilst also having to explaining the other claimants’ reports of your poor conduct and actions. The Swordkeeper will interview the claimants in turn, handing out Merit and Dishonour dice as he sees fit. These will eventually rolled, with the results from the Dishonour dice cancelling out those from the Merit dice, and the Claimant with the highest result not only being awarded the Blade of Ages, but also allowed to influence narration of how the other Claimants are remembered. This is an engaging game of competitive storytelling with the Swordkeeper also pushing back at the Claimants’ tales of their heroics and should prove entertaining to play.
Lastly, Jim Dagg’s ‘Insubordinate’ bills itself as “An antifascist science fantasy RPG inspired by Final Fantasy VII, VIII, and XIII.” Consequently, it pretty much wears that influence on its sleeve (or is that in its spikey hair and extraordinarily large blade?), so it is very easy to buy into the set-up and genre if you know the inspiration. The players take the roles of resistance fighters standing up against the all-powerful Dominion, which has decided to subvert, control, and leverage an Ancient Power to gain its power over the world. The players get to design characters using different battle styles, black elemental or sabotage spells, white protective spells, and techniques which include practical skills and tricks. The game is played as a series of missions, broken down in acts representing different hurdles the Player Characters have to overcome or defeat or avoid. ‘Insubordinate’ lends itself to campaign play and really should have the players humming the victory music at the end of every battle.

LEVEL 1 – volume 3 2022 is a slim, digest-sized book. Although it needs an edit in places, the book is well presented, and reasonably illustrated. In general, it is an easy read, and most of it is easy to grasp. It should be noted that the issue carries advertising, so it does have the feel of a magazine.

As with previous issues, LEVEL 1 – volume 3 2022 is the richest and deepest of the releases for Free RPG Day 2022. Not every one of the fifteen games in the anthology explores its theme of ‘myths and legends’, but for the most part, the fifteen are interesting, even challenging, and will provide good sessions of roleplaying. Some though are not interesting or even playable as a game, but the good outweighs the bad—or the uninteresting. Once again, despite the variable quality of its content, of all the releases for Free RPG Day 2022, LEVEL 1 - volume 3 2023 is the title that playing groups will come back to again and again to try something new each time.