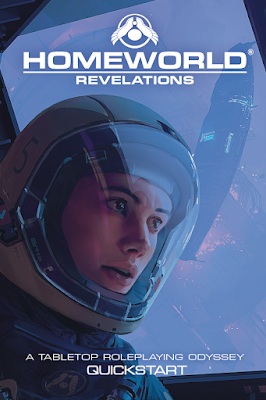 Homeworld: Revelations – A Tabletop Roleplaying Odyssey Quick-Start is the release from Modiphius Entertainment for Free RPG Day 2022. It is the quick-start for Homeworld: Revelations, the roleplaying based on the real-time strategy video game series Homeworld, which includes Homeworld, Homeworld: Cataclysm, Homeworld 2, and Homeworld: Deserts of Kharak, as well as the forthcoming Homeworld 3. The series tells the story of the  Kushan, a people lost in space after the destruction of their home planet, Kharak, and their attempt to find Hiigara, a new homeworld, journeying in fleet lead by a massive mothership. In Homeworld: Revelations – A Tabletop Roleplaying Odyssey Quick-Start, the players take the roles of members of The Dreamlands team, archaeologists brought together to gather historical records and artefacts from the wreckage of the great ship, the Khar-Toba, on the planet Kharak. Unfortunately, they are not the only ones interested the Khar-Toba. Others want to stop anyone from discovering the knowledge and technology which lies within the bowels of the great ship, and will do anything to prevent that from happening.
Homeworld: Revelations – A Tabletop Roleplaying Odyssey Quick-Start is designed for play by five players and come with five pre-generated Player Characters, printed separately. It contains all the rules necessary to play, including skills, action, combat, and interaction, all the way up to ship-to-ship combat. The five pre-generated characters include a security officer, a researcher, a medical officer, a technological operations manager, and pilot. All five are simply and clearly laid out and easy to read and use. Each also comes with a good illustration as well as a little background.

A Player Character in Homeworld: Revelations – A Tabletop Roleplaying Odyssey Quick-Start and thus Homeworld: Revelations is defined by Attributes, Disciplines, Focuses, Values, Traits, Talents, and Truths. The six Attributes—Agility, Brawn, Coordination, Insight, Reason, and Will—represent ways of or approaches to doing things as well as intrinsic capabilities. They are rated between seven and twelve. There are six skills—Combat, Command, Engineering, Exploration, Flight, and Medical—which are fairly broad and rated between one and five, whilst Focuses represent narrow areas of study or skill specialities, for example, Expert Pilot, Jury Rigging, Field Surgery, Unfamiliar Technology, and Chain of Command. Truths are single words or short phrases, which describe a significant fact or aspect about its subject, whether that is a scene, person, place, environment, or object. A Truth can make an action easier or more difficult, or even simply make it possible or impossible.
To undertake an action in the 2d20 System in Homeworld: Revelations, a character’s player rolls two twenty-sided dice, aiming to have both roll under the total of an Attribute and a Skill. Each roll under this total counts as a success, an average task requiring two successes. Rolls of one count as two successes and if a Player Character has an appropriate Focus, rolls under the value of the Skill also count as two successes. In the main, because a typical difficulty will only be a Target Number of one, players will find themselves rolling excess Successes which becomes Momentum. This is a resource shared between all of the players which can be spent to create an Opportunity and so add more dice to a roll—typically needed because more than two successes are required to succeed, to create an advantage in a situation or remove a complication, create a problem for the opposition, and to obtain information. It is a finite ever-decreasing resource, so the players need to roll well and keep generating it, especially if they want to save some for the big scene or climatic battle in an adventure.
Now where the players generate Momentum to spend on their characters, the Game Master has Threat which can be spent on similar things for the NPCs as well as to trigger their special abilities. She begins each session with a pool of Threat, but can gain more through various circumstances. These include a player purchasing extra dice to roll on a test, a player rolling a natural twenty and so adding two Threat (instead of the usual Complication), the situation itself being threatening, or NPCs rolling well and generating Momentum and so adding that to Threat pool. In return, the Game Master can spend it on minor inconveniences, complications, and serious complications to inflict upon the player characters, as well as triggering NPC special abilities, having NPCs seize the initiative, and bringing the environment dramatically into play.
Combat uses the same mechanics, but offers more options in terms of what Momentum can be spent on. This includes doing extra damage, disarming an opponent, keeping the initiative—initiative works by alternating between the player characters and the NPCs and keeping it allows two player characters to act before an NPC does, avoid an injury, and so on. Damage in combat is rolled on the Challenge dice, the number of ‘Homeworld: Revelations’ symbols rolled determining how much damage is inflicted. A similar roll is made to resist the damage, and any leftover is deducted from a character’s Stress. If a character’s Stress is reduced to zero or five or more damage is inflicted, then a character is injured. Any ‘Homeworld: Revelations’ symbols rolled indicate an effect as well as the damage. In keeping with the tone of the various series, weapon damage can be deadly (and nearly every character—Player Character or NPC, is armed with a firearm of some kind), melee or hand-to-hand, less so.

Lastly, the Player Characters all begin play with several points of Fortune, which can be used to pull off extraordinary actions, perform exciting stunts, make one-in-a-million shots, or provide an edge during life-or-death situations. These can be spent to gain a Critical Success on any roll, reroll any dice, gain an additional action in a round, to avoid imminent defeat, and to add new element to the current scene. More can be earned through play, such as accepting a Complication, changing a Defining Aspect about a character, or good roleplaying.

The rules themselves in the Homeworld: Revelations – A Tabletop Roleplaying Odyssey Quick-Start take up almost two thirds of its pages. The rest is taken up by the scenario. This starts in the outer desert region known as The Dreamlands where the wreck of the Khar-Toba can be found. The Player Characters are part of a team lead buy by the archaeologist Mevath Sagald, sent to investigate the wreck and glean what historical records and artefacts they can from it. However, the wreck is guarded by the Gaalsien, a kiith or clan religiously opposed to all thoughts of discovery and exploration, fearing that the Kushan took part in a great evil long ago and were punished by being exiled. The Player Characters will need to find a way into the wreck and avoid detection, exploring the ships and recover archaeological artefacts, and then escape both the ship and any attempts by the Gaalsien to stop them. Divided into five scenes, the scenario primarily involves stealth and exploration, although there is scope for combat and interaction depending upon what the players decide to do. There are moments throughout for each Player Character to shine and the scenario builds to an exciting climax chased by Gaalsien spacecraft. Overall, it is good adventure, and it should provide a good two sessions’ worth of play or so.
Physically, Homeworld: Revelations – A Tabletop Roleplaying Odyssey Quick-Start is a good looking affair with excellent artwork and decent layout. Unfortunately, the whole affair does feel rushed and needs another good edit. On the plus side though, it is well written, and there are lots and lots of examples of play and sections of advice for the Game Master. There is no cartography and thus no deckplans of the Khar-Toba. The scenario is not difficult to run without them, but their inclusion would have helped.
Ultimately, Homeworld: Revelations – A Tabletop Roleplaying Odyssey Quick-Start is let down by one factor and one factor alone. It has rules, it has pre-generated Player Characters, and it has a scenario. What it entirely lacks is background. There is no explanation of what Homeworld is or what the setting of Homeworld: Revelations is like, so leaves the Game Master to do her own research and prepare it for her players. This is disappointing as a quick-start is designed to both introduce a setting and a roleplaying game to players unaware of the setting and introduce a roleplaying game to those who know the setting. Homeworld: Revelations – A Tabletop Roleplaying Odyssey Quick-Start does a better job of doing the latter than the former and so does not fully succeed as a quick-start.
Posted by pookie at 12:00