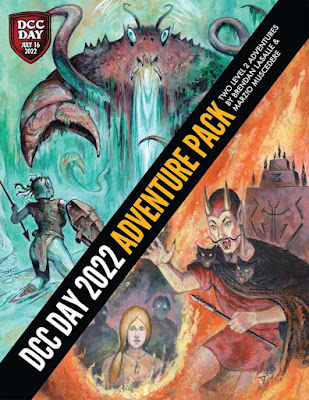 DCC Day 2022 Adventure Pack opens with ‘Incident at Toad Fork’, a scenario for the Dungeon Crawl Classics Role Playing Game written by Brendan Lasalle. This returns to the Appalachian-style fantasy setting of The Shudder Mountains, first seen Dungeon Crawl Classics #83: The Chained Coffin and more recently compiled in Dungeon Crawl Classics #83: The Chained Coffin anthology. Consequently, the scenario has a strong sense of the rural versus the urban, the backwoods culture versus the sophisticated manners of the city, the distrust of the latter by the former, and the feeling that them there city folk are invariably out to bamboozle the good folk of The Shudder Mountains.
The scenario opens with the Player Characters invited to the Harvest Moon Dance, an important annual event when all of the Shudfolk from the communities across The Shudder Mountains come together. It is normally a joyous affair, with plenty of dancing and music, but this year is different. A strange shadow is cast over the activities as several of the young men suddenly bolt, running pell-mell into the surrounding woods, oblivious to all entreaties. The Elders entreat the Player Characters to go after them and they quickly encounter strange glamours and a representative of one the devil which competes for Shudfolk souls. This is a fun roleplaying encounter for the Judge to portray, the NPC being akin to the charming and seductive Mister Dark from the film, Something Wicked This Way Comes, as portrayed by Jonathan Pryce (or in this case, Vincent Price). Overall, reminiscent perhaps of Halloween, but set way in the mountains with a Hillbilly sensibility, if the Judge has not yet run Dungeon Crawl Classics #83: The Chained Coffin, then this is an entertaining and engaging adventure to add to the campaign setting.
Marzio Muscedere’s ‘The Last Life Guardian’ is the second scenario. In this adventure for Mutant Crawl Classics Roleplaying Game, members of the Player Characters’ village have learned a terrifying tale of horror and hope from a dying outland trader. He told them that a Pure Strain Human wizard with the ability to heal and even bring the dead back to life is being held prisoner by savage mutants within a time-ravaged superstructure of the Ancient Ones. The village Rememberers—the wisest of the villagers—have said that the trapped wizard must be none other than a fabled Life Guardian, a surviving member of an ancient pre-disaster order sworn to heal and protect mankind. Consequently, he must be rescued. Which of course, as village’s Seekers, those that go out and search for technology and knowledge of the Ancients and protect the villagers from outside threats, is a task for the Player Characters.
Once at the site of the time-ravaged superstructure, both Seekers and their players will quickly realise one fact each. The Seekers that even the lake is artificial and their players, what with the ruins of café alongside the lake and the tubes curling all over the place, that it is actually a former waterpark! Part of the fun of the scenario is in recognising this fact, as is discovering that it is home to a tribe of fishmen! So what you have is not-Deep Ones at the deep end of the pool and they are not happy with the presence of the Seekers. As well as dealing with the not-Deep Ones, there is still a decent bit of exploration and investigation to conduct, with only a relatively small bit of roleplaying at the scenario’s end. The various locations are nicely detailed, and a lot of thought has gone into twisting a simple waterpark into an aquatic den of danger in Terra A.D. Especially the zombie which appears if the Seekers are just that too curious! Primarily an exploration and combat scenario, the isolated location for ‘The Last Life Guardian’ makes it easy to drop into a campaign, with success granting the Player Characters a potentially useful campaign reward rather than personal ones.
Physically, DCC Day 2022 Adventure Pack is decently done. The artwork is fun and the maps clear. The map for ‘The Last Life Guardian’ though will need careful examination by the Judge as it is a little busy. Both scenarios are well written and easy to read.

DCC Day 2022 Adventure Pack contains two entertaining scenarios. ‘The Last Life Guardian’ makes a great deal from the one location for the Mutant Crawl Classics Roleplaying Game – Triumph & Technology Won by Mutants & Magic, but ‘Incident at Toad Fork’ for the Dungeon Crawl Classics Role Playing Game and specifically, The Shudder Mountains, is a fun, fast-paced Hillbilly horror scenario which will want to make the Judge take a closer look at the Appalachian-style fantasy of Dungeon Crawl Classics #83: The Chained Coffin—if he has not already.
Posted by pookie at 18:00