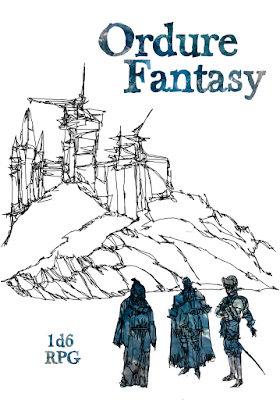 The primary drive behind the Old School Renaissance is not just a nostalgic drive to emulate the fantasy roleplaying game and style of your youth, but there is another drive—that of simplicity. That is, to play a stripped back set of rules which avoid the complexities and sensibilities of the contemporary hobby. Thus, there are any number of roleplaying games which do this, of which Ancient Odysseys: Treasure Awaits! An Introductory Roleplaying Game is an example. Ordure Fantasy, published by Gorgzu Games is an incredibly simple Old School Renaissance-style fantasy roleplaying game using a single six-sided die with a straightforward mechanic throughout, and providing four character Classes, offbeat monsters, and table upon table for generating elements of the world, from setting, quests, and locations to NPCs, dungeons, and random encounters.

Ordure Fantasy: A simple d6 roleplaying game starts with its mechanic. To undertake an action for his character, a player rolls a single six-sided die, aiming to get equal to or under the value of a Skill or Ability to succeed. Easy and Hard Tests are made with two six-sided dice, the lowest value kept for Easy Tests, the highest value retained for Hard Tests. For deadly, dangerous, cataclysmic or annoying situations, the Referee can demand that a player make an ‘Ordure Test’. On a result of a six, the ‘Ordure’ of the situation happens, on a result of four or five, the Player Character gets a rumbling, warning, or unsettling portent of the ‘Ordure’. If the ‘Ordure’ situation persists, the ‘Ordure’ range on the die expands from a six to five and six, then four, five, and six, and so on. Essentially, the ‘Ordure’ Test is a random response generator to dire situations, enforcing the fact that the world is a dangerous place, one in which the ‘heroes’ are not actually capable of dealing with based on their own abilities or skills—more random fortune. However, Ordure Fantasy does not suggest what such situations might be.

Combat is more complex in Ordure Fantasy. Initiative is handled by lowest rolls acting first, and attacks by a player rolling under his character’s Combat skill. If a Player Character is hit, then his player can roll a Body or Mind Test for his character to defend. All attacks inflict a single point of damage which is deducted from the Health of a Player Character or NPC. Enemies—whether a monster or an NPC, have only the Ability, that is, Health, and when Health, whether that of a Player Character, monster, or NPC, is reduced to zero, then they are dead. In addition, some Player Characters, NPCs, and monsters have abilities and skills that will inflict various effects in addition to the deduction of a single point of Health—and they can be quite nasty. Thus, the Nursing Acid Wing has a grasp attack and the Mercenary Class’ Sword Skill can be good enough to lop off the limbs and appendages of his enemies—if the rest of the Combat Test is good enough.

Ordure Fantasy provides a half-dozen monsters—not really enough, but very much not traditional fantasy in terms of their design, a page of notes and advice for the Referee, all decent enough, before it gets down to creating Player Characters. A Player Character is defined by three Abilities—Body, Mind, and Luck, plus his Health, Class, equipment, and money. There are four Classes—Mercenary, Conjurer, Scoundrel, and Curate, each of which maps onto the four Classes of classic fantasy roleplaying. The Mercenary is soldier of fortune, trained in the arts of war without loyalty to any lord or realm; the Conjurer an autodidact explorer of unreal realms and summoner of fey things; the Scoundrel a charming alley rat unconcerned with the law; and the Curate, the neophyte scion of some cult excommunicated for heretical and gnostic preachings. So, there is a sense that the characters of the world of Ordure Fantasy are ne’er-do-wells, brutes, uncaring, cynical bastards in a landscape of grim and dangerous peril.

Each Class has four Skills and a Boon. Skills can be used as often as necessary, whilst Boons can be used once per game session. For example, the Mercenary has Bow, which provides a ranged attack; Sword, a melee attack capable of taking off limbs; Shield, which improves a Mercenary’s defence for a melee turn; and Intimidate. The Mercenary’s Boon is ‘Execute’. Simply, the Mercenary declares a target and his next successful attack against them is instantly fatal. Ouch!

Boon: An Old Friend (Roll twice on each side of the Random Reaction table and select combination for the relationship).

Magic in Ordure Fantasy is both interesting and banal. The Curate simply gets Heal, Curse, and Resurrect as Skills, and these feel banal and flavourless. They ape the divine magical abilities found in other fantasy roleplaying games and they are simply not that interesting. In comparison, the Conjurer has interesting magic and really gets to do things with it. What a Conjurer can do is summon. This is modelled with the Summon Emotion, Summon Element, and Summon Being Skills. The first of these enables a Conjurer to flood a sentient being’s mind with an emotion of the Conjurer’s choice, the second to summon a fist-sized ball of an element the Conjurer has seen before, and the third a being the Conjurer has seen before—and the Conjurer can control numerous beings once he rises far enough in Levels. Simply, there is a flexibility to these Skills, a flexibility limited only by the player’s imagination and the Referee’s agreement. So there is potential for a lot of fun with the Conjurer Class, whereas the Curate not so much.

Equipment—especially enchanted and mythical equipment, is again simply handled. The former, for example, magical maps or a master thief’s tools, make Skill Tests easy, whilst the latter are so well crafted and infused with magic that they grant a +1 bonus to a particular Ability or Skill. Given the one to six scale of Ordure Fantasy, such mythical items are really powerful and may provide benefits beyond the simple bonus.

Over a third of Ordure Fantasy is devoted to ‘Referee’s Tables’. These start out with a table for what the Player Characters doing when the first session starts, and then goes on to define the danger in the particular realm, what adventurers are needed for or do, and what the town where the Player Characters are is, what quest is available there, what the dangerous region outside the town is, and so on. There are twelve tables here, each with multiple options, which with just a few rolls of a die, the Referee can generate a sheaf of hooks and elements around which she can base an encounter, a scenario, or even a mini-campaign, perhaps even as the game proceeds.

Physically, Ordure Fantasy is a nineteen page, 2.78 Mb, full colour PDF. The layout is clean and tidy, and it is illustrated with okay, if scratchy pen and ink drawings. The use of colour is minimal though and although attractive, does not add to the look of the game. It does need an edit in places. The last page in Ordure Fantasy is the character sheet, which clear and easy to use, and as a nice touch, includes the basics of rolling Tests and the Combat Rules for easy reference by the players.

If there is anything missing from Ordure Fantasy, it is a scenario. Certainly, the inclusion of such a sample adventure would have supported its ‘pick up and play’ quality, for Ordure Fantasy is really easy to learn and lends itself to quick and dirty games. Similarly, It would have been nice to have seen more monsters, though there is a table for generating foes, but it is kind of buried in the back of the game. The only other issue is the Curate Class, which is more useful to have someone playing it rather than actually being interesting to play.

Overall, Ordure Fantasy does what it sets out to do, and that is present a stripped down, fast-playing grim and gritty set of mechanics, that support its grim and gritty tone.