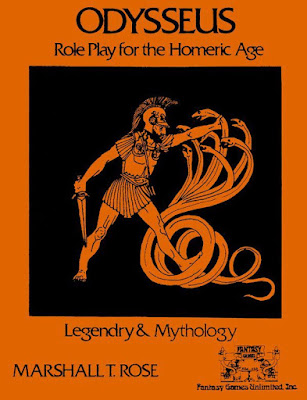 Odysseus – Role Play for the Homeric Age was published by Fantasy Games Unlimited in 1980 and has the distinction of being the first roleplaying game set in the Ancient World. It is a roleplaying game in which heroes of the age adventure, travel the known world and sail the Aegean Sea and beyond, battle heroes from other lands, and maybe face the monsters that lurk in the seas and caves far from civilisation. It is also a man-to-man combat system, a trireme-to-trireme combat system, a guide to a combination of Greece in the Bronze Age and the Iron Age, and all that packed into thirty-two pages. However, it is very much a roleplaying of its time and vintage—and what that means is there is at best a brevity to game, a focus on combat over other activities, and a lack of background to the setting. Now of course, many of the gamers who would have played Odysseus – Role Play for the Homeric Age in the early nineteen eighties—just as they are today—would have been knowledgeable about the Greek Myths and so been able to flesh out some of the background. However, Odysseus – Role Play for the Homeric Age still leaves the Moderator—as the Game Master is known in Odysseus—with a lot of work to do.

A hero in Odysseus – Role Play for the Homeric Age—and it is very much a case of it being a hero rather than a hero or a heroine, is a young warrior ready to set out on a life of adventure and myth building. Aged between seventeen and twenty-three, he is defined by his home province, which also determines his patron god, his lineage, which determines his primary profession—which he shares with father, and his other skills. Rolls are also made for his family and the armour he begins play with. Notably, a hero has the one skill or ability—his Fighting Skill Number or FSN, initially rated between eleven and twenty, and can go higher. As well as Fighting Skill Number, a player also rolls for his hero’s armour—type, what it covers, and its composition. Heroes with a high FSN are likely to have better, even iron, armour.

So character generation out of the way—although as we shall see, it is not complete—Odysseus – Role Play for the Homeric Age dives not into the mechanics of a skill system (there is none) or the man-to-man ‘combats’ system (as it is described), but the rules for ship-to-ship combat. They describe Greek naval warfare as complex and are essentially a miniatures combat system, for which it is suggested that a large floor space and miniatures are needed. The rules cover movement—by sail and by oars, as well as the effect of the wind, maneuvering, missile fire—from both arrows and spears, collisions and ramming, plus grappling and boarding, taking on water, mast damage, and more. All of this is done in the captain’s orders, which are written down at the beginning of every combat round. The rules cover everything in just three pages.

Man-to-man combat or ‘Combats’ as Odysseus – Role Play for the Homeric Age describes it, is actually more complex than ship-to-ship combat. Initiative is generally handled by weapon range—weapons with longer range or reach indicating that a warrior attacks first. Then each combatant selects two cards, one an Attack Position Card, the other a Defence Position Card. The Attack Position Card indicates where the attacking warrior intends to strike, for example Head, Abdomen, or Calf, whilst the  Defence Position indicates where the defending warrior wants to protect, for example, ‘Parry Middle Without Shield’ or ‘Punch with Shield High’. The chosen Attack Position Card and Defence Position Card are cross referenced on the ‘ATK POS/DEF POS’ table. This can generate an ’NE’ or ‘No Effect’ result, in which case the attack is blocked or the attacker missed, or it can generate a modifier which is applied to the chance to hit number. This is determined by cross referencing the weapon used in the attack against the protection value of the armour on the location struck. This is a percentage value under which the attacking player must roll to succeed. Conversely, the player needs to roll high on the percentage dice to determine how much damage is inflicted, which determined by the Attack Position—as determined by the Attack Position Card cross referenced with the roll, the result varying from ‘No Effect’, ‘Stun’, and one or more Wounds to ‘Kneeling’, ‘Unconscious’, and ‘Kill’.

Beyond the mechanics for ship-to-ship combat and man-to-man combats, Odysseus – Role Play for the Homeric Age includes some campaign notes for the Moderator, primarily movement and encounters—by land and by sea, and done daily. The encounter table includes some classic mythic creatures like Gorgons and Centaurs, but essentially, they have no more stats than Player Character. All of the encounters are accorded thumbnail descriptions, as are the gods. The only major piece of advice for the Moderator is how to handle warrior versus god combat, that comes down to allowing it, but inflicting a high degree of bad luck upon the warrior for being so presumptuous!

There are two other mechanics in Odysseus – Role Play for the Homeric Age and both concern the Player Characters, but both are secret. In fact, they are so secret that the Moderator rolls them and never reveals them to his players. Both are straight percentage values. One is the Deity Empathy Score, which reflects how much a warrior’s patron likes or dislikes him, whilst the other is the warrior’s Luck Number. The only suggested use for this is determining how well other people react to the warrior.

Physically, Odysseus – Role Play for the Homeric Age is a slim book with rather underwhelming production values. Although the pen and ink illustrations are really quite good, the maps are bland and lack detail. It needs another edit and it is not quite sure what the title is—Odysseus – Role Play for the Homeric Age, Odysseus the Wanderer, or Odysseus Legendry & Mythology (sic). The main issue perhaps is the odd organisation which dives in ship-to-ship combat before personal combat, in the inclusion of a pop quiz about the rules rather than more examples of play, and so on. The game includes a card insert which is intended to be removed and used in play, and includes the Attack Position Cards and Defence Position Cards, and two ship’s deckplans.

Odysseus – Role Play for the Homeric Age was reviewed by Elisabeth Barrington in Space Gamer Number 31 (September, 1980), who commented that, “The character generation rules are a little skimpy at times, and some of the numerous tables are difficult to figure out.” before concluding that, “As new RP systems go, this one is above average. Only one book, and it is well-designed. Historical gamers specialising  in the classic period, this is for you.” However, Donald Dupont, writing in Different Worlds Issue 11 (Feb/Mar 1981) was far less positive, opening with the comment, “Odysseus is apparently an attempt at a roleplaying system for the Homeric Age of Greece, the Heroic Age of which Homer sings in his epics Iliad and Odyssey. As a mise en scene for the Bronze Age in the Aegean Basin it fails miserably. As a role-playing system it is disorganized, clumsy, and incomplete. The game lacks color, both of the Homeric Age, which it claims in its title, and of the later Classical Age which, in fact, it more closely approximates.” He finished the review by saying that, “Odysseus is a disappointment. The roleplaying world could use a good Heroic Age game system. With a great deal of interpretation and interpolation, Odysseus is perhaps usable by players familiar with role-playing systems, but the confused nature of its rules, and the lack of color in its world hardly make it worthwhile.”

It is debatable whether Odysseus – Role Play for the Homeric Age is a roleplaying game, its wargaming origins being so evidently on show, its focus being mainly on combat, and there being very little in terms of character to either roleplay or develop. This is not to say that the game cannot be played as either a wargame or a roleplaying game, but it would require a great deal of input from both player and Moderator—especially the Moderator, and whatever roleplaying experience might ensue, would definitely come from their efforts rather than be supported by the game itself. Of course, there are many roleplaying games like this, and this is with the benefit of hindsight, but even then, there really is very little to recommend Odysseus – Role Play for the Homeric Age. It simply does not have the right sort of rules to be a roleplaying game and it does not have the background to really do what the author intended. Odysseus – Role Play for the Homeric Age is very much a collector’s curio, a design from the beginning years of the hobby when not every publisher quite knew what a roleplaying game should be or what it should do, a design still influenced too much by the wargaming hobby before it.