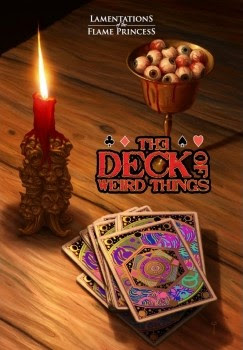 Dungeons & Dragons has given the hobby a great many things, many of them signature things. In terms of treasures and artefacts, none more so than The Deck of Many Things. Since it appeared on page one-hundred-and forty-two of the Dungeon Master’s Guide for Advanced Dungeons & Dragons, First Edition in 1979, The Deck of Many Things has been a wondrous thing, an artefact which dealt out fantastic gifts—both beneficial and baneful, which wrought amazing changes upon a Player Character and the world around them. These ranges from being given a beneficial miscellaneous magic item and fifty thousand Experience Points, being granted between one and four wishes, gaining an enmity between the Player Character and a devil to the Player Character losing all of his magical items—all of them and forever, having their Alignment radically changed, and being imprisoned—instantly! Once found and as each card is drawn from The Deck of Many Things, that card will change the drawing Player Character, the world about him, and the campaign itself. The Deck of Many Things is not just a wondrous artefact, but very probably, a box/bag—whatever it came in, of chaos.

So what effects might happen when a Player Character draws a card? The drawer’s hair—all of it, becomes brittle, inflexible, and like straw; a particularly frail and elderly person becomes obsessed with the drawer and joining the party, and generally though not of any real use, grants a bonus to reaction rolls when present; the drawer’s player must swap their drawer’s highest ability score with the lowest; the drawer can buy one single item or service for free; the drawer is immune to poisons and diseases; once everyone has drawn their cards, the current drawer can choose to draw more just for himself; and suddenly, duplicates appear of those drawing cards, but they do not want to attack their respective drawers, but go and settle down and live an entirely mundane life! There is a huge variety of effects in The Deck of Weird Things, some obviously mechanical, some world related, and so on, and given that each card disappears after having been drawn and taken effect, they are extremely unlikely to see them repeated unless there are multiple copies of The Deck of Weird Things in a game world. Further, given the number of effects in The Deck of Weird Things, its effects are still unlikely to be duplicated even if it turns up in an entirely different campaign.

Essentially, The Deck of Weird Things is a book of—not tables—but of one big table. One big table with what is effectively over two hundred entries. These are divided into categories, one category per page, and four entries per category. These are clearly presented on each page, so that that process from drawing a card to determine the category to drawing a card to determine the specific effect all plays out fairly quickly.

The Deck of Weird Things offers exactly what it promises—a means to change a campaign, to add random effects, to upset the proverbial apple cart, and to add weird effects to campaign. It will do that, and if that is what you as the Game Master want for your campaign and your players are happy with that, then fine, certainly add The Deck of Weird Things to change, potentially really change your campaign. And it should be noted that this does not have to be a campaign just for Lamentations of the Flame Princess Weird Fantasy Roleplay—The Deck of Weird Things will work for any Old School Renaissance retroclone, just as it would work for Dungeons & Dragons, Fifth Edition.