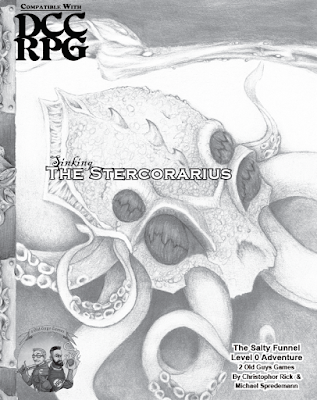 Sinking the Stercorarius: The Salty Funnel Level 0 Adventure is a ‘Character Funnel’ for use with Dungeon Crawl Classics Role Playing Game and thus features one of the feature elements of  both Mutant Crawl Classics Roleplaying Game and Dungeon Crawl Classics Role Playing Game. The set-up for this requires each player to roll up three or four Level Zero characters and have them play through a generally nasty, deadly adventure, which surviving will prove a challenge. Those that do survive receive enough Experience Points to advance to First Level and gain all of the advantages of their chosen Class.

Published by 2 Old Guys Games, following a successful Kickstarter campaign, Sinking the Stercorarius dumps the Player Characters aboard what turns out to be a sinking ship—whether as criminals, slaves, members of the elite, or simply day-trippers—and has them fight their way on the deck just as something tentacular takes advantage of the ship going down.

The adventure is the first to use the publisher’s ‘Multi-Adventure-Theme System’. What this does is present different themes or ways in which the set-up for adventure can be played. In the case of Sinking the Stercorarius, these themes explain why the Player Characters are aboard the ship when she springs a leak. Four are given. They are in turn, prisoners, rushed through a trial, found guilty, and now bound for the gaol on the island of Prison Rock; as slaves in the hold; as pompous members of the elite aboard a jolly cruise; or as day-trippers getting an ‘Authentic Pirate Experience’. To support the first three of these set-ups, but not the fourth as for that, the Player Characters could be of any background, Sinking the Stercorarius includes three Occupation tables. One for Prisoners, one for Slaves, and one for the Elite.

Whichever of the themes—singly or combined, which is also discussed as an option—the set-up for Sinking the Stercorarius finds the Player Characters aboard the ship as it springs a leak and begins to sink. The Player Characters must find their way out of their confinement and fight their way onto the deck, and then just as quickly, off the ship before they are dragged into the depths by the undertow! As this happens, the water swirls around the Player Characters, something tentacular moves between them, attacking some, grabbing others, and dragging them away. When the Player Characters find themselves in the freezing seas, they spot a strangely isolated, conical island of black rock within swimming or rowing distance.

Designed to be played between one and two sessions, Sinking the Stercorarius is decently supported. Besides the Occupation tables, it comes with maps of both the Stercorarius and the strange structure, details of three new weapons, five alien and aquatic monsters, plus handouts. There is also some decent staging advice for the Judge as well as playtest notes throughout which make for an enjoyable read.

Physically, Sinking the Stercorarius is reasonably well presented. The new artwork is decent, as are the maps, although those of the strange structure on the island are really too small to be used with any ease. It is a pity that the two pages left ‘intentionally blank’ could not have been put to better use. The scenario could have done with another edit as well.

Now whilst Sinking the Stercorarius is adequately playable, it unfortunately suffers from a number of problems. The most obvious one is the inclusion of the ‘Player Characters as slaves’ theme, which some playing groups are going to find objectionable, especially since they begin play as slaves in the hold of a ship. It should be made clear that the Player Characters are not Africans and that the adventure does not take place in the real world—the authors have in no way been that insensitive. However, the difficult nature of this theme and its set-up could at least have been addressed by the authors and the Judge been given some advice about handling what could be a difficult theme for some. Or at least told to avoid that theme if she knows that her players would find it objectionable and insensitive.

Another problem is that the authors commit the cardinal sin of not explaining what the scenario is about. There is no explanation of the plot anywhere and essentially, the Judge only learns what Sinking the Stercorarius is about and what its plot twist is by reading through the scenario herself. On a first read through at least, it feels as if the authors are pulling the same bait and switch on the Judge as much as they are on the players.

That bait and switch is the fact that Sinking the Stercorarius is not salty, is not nautical, and is definitely not piratical. It might begin on a ship, but since the ship sinks, the only nautical things that the Player Characters get to do is cling to some flotsam, swim to ‘safety’, and possibly row a dinghy. They do not get to sail a ship, they do not meet any pirates, and they do not get to be abused by ‘salty’ language. In fact, the only ‘salty’ language that the Player Characters might be abused by is their own.

What the bait and switch involves is a crash-landed alien spaceship—the strange, metal tower-like structure, bent and crumpled, and this will become immediately obvious as soon as one of the handouts is shown to the players. The majority of the new monsters are aliens and the new weapons are basically, ray guns. In essence then, Sinking the Stercorarius: The Salty Funnel Level 0 Adventure starts at sea, goes to a mysterious island—and completely ignores the possibilities that exploring a mysterious island, especially in what is supposed to be nautical adventure—might provide an adventure with, and presents the Player Characters with a miniature version of S3 Expedition to the Barrier Peaks, the classic Science Fiction adventure for Advanced Dungeons & Dragons, First Edition.

Sinking the Stercorarius: The Salty Funnel Level 0 Adventure is a ‘Character Funnel’ and undeniably so, but equally undeniable is the fact that Sinking the Stercorarius is not salty. Obviously, it does not taste of salt nor is it preserved with salt (I checked); equally, it is neither down-to-earth or coarse in terms of its language or humour; and nor is tough or aggressive, or angry or resentful in terms of its attitude. Ultimately, without the salt, whether that is in terms of the tone or the nautical theme, Stercorarius: The Salty Funnel Level 0 Adventure is a bland and uninspiring adventure.