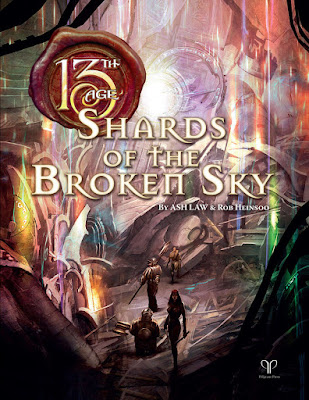 Redfield Valley is so utterly bucolic and idyllic that there is almost no reason for anyone to go there. Unless of course, you grew up there or you have recently come into property there or you are returning the ashes of a friend to his home there or a fugitive you are hunting for is said to have taken refuge there or you are investigating rumours that the valley might actually be full of treasure or… Or whatever the reason, you and your fellow Player Characters are visiting Redfield Valley, best known for its rich, red soil, Vakefort—the dullest outpost in the Imperial Army, and that is it. Redfield Valley really is nothing to write home about. Oh perhaps after visiting the villages of Crownhill and Appleton, the inhabitants might come to you with some help dealing with some Goblins who have kidnapped several of the locals, but that is about as much excitement as you would expect to find in Redfield Valley…

And then KABOOM! And fazacck! And fire and really sharp, eye-stinging glitter (not kidding) and… the sky falls on Redfield Valley.

Now, the green, bucolic landscape of Redfield Valley has been turned into a blood red mud churned hellhole, littered with debris that crackles with strange energy from a city, whilst the Old Tusk promontory to the south is a steaming caldera, towers lie on their side, cracked and open, roads in the sky appear to climb to nowhere, and a dungeon appears to spiral into the sky. None of this was there before the fall… What has happened in Redfield Valley? Who unleashed the devastation and what secrets will it reveal?

This is the set-up for Shards of the Broken Sky, a campaign for 13th Age, the roleplaying game from Pelgrane Press which combines the best elements of both Dungeons & Dragons, Third Edition and Dungeons & Dragons, Fourth Edition to give high action combat, strong narrative ties, and exciting play. Designed to take Player Characters from First Level to Seventh Level, it is a sandbox campaign set in 13th Age’s Dragon Empire. It supports different motivations and play styles, is designed to support Player Character relationships to the setting, and which really could be played more than once—though with different Player Characters—and each time their motivations would make the campaign very different in tone and flavour. It is also both brilliant and broken.

What is going on in Shards of the Broken Sky—and this explanation is clearer and more straightforward than any given in the book, and something that the authors should have led with, but failed to do so—is that Redfield Valley hides an incredible secret. It is actually the cover for an ancient prison and repository for all of the ancient secrets and dangers that Dragon Empire—and in particular the Emperor and the Archmage do not want anyone to know about or to get hold of. In Ages past, the Archmage hid these secrets behind wards which prevented access to them and built Vantage, a flying city-fortress-prison, to monitor, control, and protect the wards. Neither the wards, Vantage, or the roads that led up to it could be seen from the ground unless you had permission and knew the way. Now, something or someone has caused Vantage to come crashing down to earth, depositing an apocalypse upon Redfield Valley, causing death and devastation, weakening the wards it was built to maintain, and over the course of Shards of the Broken Sky, failing and so unleashing and revealing all of the secrets and threats Vantage was intended to hide.

Over the course of the campaign, the Player Characters will constantly find themselves delving into dungeons that are not dungeons and dungeons that are not dungeons which play with perspective and geometry and time. They are almost bookended by a pair of tombs, one full of traps inspired by Grimtooth’s Book of Traps, the other full of the deadliest of traps that the Old School Renaissance has to offer, and which would ordinarily never ever otherwise appear in an adventure for 13th Age, but also include an Area 51-like bunker which served as a repository of magic; the Shattered Spine, a wizard’s tower fallen and broken on its side; a valley of dinosaurs, all ready for the Orcs to raid and die in order to grab the gargantuan beasts as mounts; Magaheim, a golden city suspended over a volcano inhabited by demons and Dwarfs and their offspring, where the Game Master can play all of the noir storylines amongst its corruption and bureaucracy; the Winding Gyre, a floating maze which spirals into the sky and will see the Player Characters leaping up and down from one lump of rubble to ruin, again and again; and a living dungeon where the Oozes which may not be what they seem.

However, to get to this brilliance, it takes a lot of effort upon the part of the Game Master—and that is where Shards of the Broken Sky is broken. And intentionally so. As a campaign, it is not just a sandbox, but a toolkit which the Game Master has to take the parts of and put together, taking dungeon after dungeon and encounter after encounter, and plugging them into the character Levels which the Player Characters are at. Shards of the Broken Sky provides numerous dungeons and encounters with which to do that. The Game Master also needs to work hard in order to bring Player Character motivations into play. This will primarily be done through their relationships with the thirteen Icons of the Dragon Empire—the Archmage, the Crusader, the Diabolist, the Dwarf King, the Elf Queen, the Emperor, the Great Gold Wyrm, the High Druid, the Lich King, the Orc Lord, the Priestess, the Prince of Shadows, and the ancient evil Dragons known as the Three—each of which has their own reasons for taking an interesting in Redfield Valley and the fall of Vantage. To support that, Shards of the Broken Sky provides adversary group after adversary group for the various factions and Icons with an interest in the remnants of Vantage, which the Game Master can plug into the campaign depending upon which the Icons the Player Characters have relationships with and which may or may not have been responsible for what has happened. Primarily these will appear as random encounters which the Game Master will work into the dungeons throughout the campaign, with the forces of the various Icons often appearing and working against the efforts of the Player Characters. These random encounters are in addition to the various monsters and encounters given for each location, as well as the Tension tables for each dungeon which ramp up the pressure on the Player Characters as they delve deeper—or even sometimes higher—into the dungeon.

As well as providing numerous adversary groups, Shards of the Broken Sky includes new monsters, new Icon-specific monster abilities to customise agents of the Prince of Shadows, new treasures, and new optional Player Character Races. The latter includes the Lava Dwarves, who can deliver a blistering heat at attack once per battle; Oozefolk, whose melee attacks do acidic damage when they are Staggered and whose touch might be acidic—an interesting defence if swallowed; and the Ophidians, legless, four-armed serpent folk with poison fangs. All make an appearance in the campaign as NPCs, and could then appear as replacement Player Characters or in the ongoing campaign once Shards of the Broken Sky has been completed. The new magical items include fading items whose power drain away from one scene to the next and various items derived from the crystals that were built into the walls of Vantage, whilst the monsters range from Pie Mimics and Kroon’s Foot Lice to Wicker Golems and Rainbow Puddings!

To fully run Shards of the Broken Sky, will need more than a few books. Not just the core 13th Age rules and 13 True Ways, but also the 13th Age Bestiary and 13th Age Bestiary 2 and the Book of Loot and Book of Loot 2. Other books, such as The Crown Commands, Fire and Faith, and High Magic & Low Cunning will be useful, but are likely optional. The excellent Book of Ages may be useful as a reference in certain dungeons of the campaign.

Physically, is in general well-presented. It needs an edit in places, and whilst relatively lightly illustrated, there is some great artwork throughout. However, of the maps that there are, many are too dark to read with ease, whilst others are comprised of icons that indicate the relationship and links between various locations. These are not often easy to read. Enjoyably throughout though are the authors’ advice and playtest feedback which provide a commentary throughout. That said, the authors could have been more upfront about the plot to the campaign and what is going on, rather than leaving it for the Game Master to discover as she reads through the book. Lastly, Shards of the Broken Sky is not actually an easy read, but that is due to it being written as a toolkit rather than as a linear dungeon which would be the case with almost any other mega-dungeon or campaign for the fantasy roleplaying game of your choice.