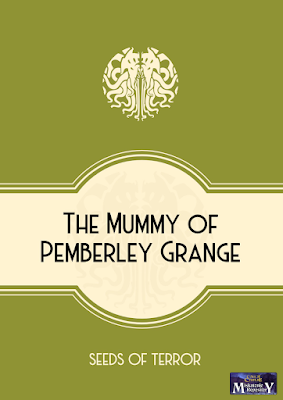 Best known as a manufacturer of props—both gaming and comic book related, Type 40 has now entered the actual gaming industry with the first of its ‘Seeds of Terror’ for use with Call of Cthulhu, Seventh Edition. Each Seed is designed to be concise and easy to run, and not only that, be easy to purchase, prepare, and run all within a single session. To that end, each includes a set-up and a plot, all of the necessary maps and handouts, and five ready-to-play pre-generated Investigators. The very first in the series is The Mummy of Pemberley Grange.

The Mummy of Pemberley Grange: A 1920s Call of Cthulhu Seed of Terror for 4 or 5 investigators takes place at a country mansion in the 1920s to which the Investigators have been invited. Their host, Jessica Pemberley, rich socialite and Egyptophile, has shipped a mummy to her home all the way from Cairo and has invited them to an exclusive ‘unwrapping party’. This is a great event, an especially prestigious event which promises great, even macabre spectacle, made all the more so because of its intimacy, just a handful of attendees rather than the very public spectacle of a Mummy unwrapping as had occurred during the Victorian Era.

Essentially, the unwrapping in The Mummy of Pemberley Grange goes ahead as planned. Then something happens and the Investigators find themselves in a perilous situation—hunted from room to room and down corridor after corridor by a nigh-on unstoppable monster. All the Investigators have to do is keep out of the monster’s clutches and find a means to stop the threat facing them. Fortunately, everything that the Investigators needs is contained within the walls of Pemberley Grange—maps, clues, books, et cetera. The solution, once found, is gruesomely entertaining, though some players and their Investigators may find it quite unpalatable.

For all that there is a plot in The Mummy of Pemberley Grange, it is a simple plot and a straightforward plot. In fact, The Mummy of Pemberley Grange is primarily the set-up for a trigger event, and once that event is triggered, whatever happens next is driven by the actions of the Investigators. Aided, of course, by the occasional nudges from the Keeper in the form of the unstoppable monster…

The Mummy of Pemberley Grange comes with five ready-to-play pre-generated Investigators. They include an Egyptian archaeologist, a reporter, a businessman, a socialite, and a dilettante. Each comes with a little background, but for the most part, the players have plenty of space in which to create the details of their Investigators’ backgrounds. The three handouts are also well done.

However, there are a couple of issues with The Mummy of Pemberley Grange. The first is the map, which shows the floorplans of Pemberley Grange. The floorplans are in fact excellent and have a period feel, but they are only of the ground floor. Which is a bit of a problem should the Investigators want to go upstairs. The second is that there are twenty or so locations given on the map, but only a handful are given any description, which means that the Keeper is going to have to make up whatever might be found in these rooms. This should not be a problem if the Keeper has watched her fair share of episodes of Downton Abbey or Poirot, but if not, the flavour and feel of the scenario might suffer, let alone the pacing if the Keeper has to improvise too much.

Physically, The Mummy of Pemberley Grange is presented and easy to read. The handouts and the map are available to download separately, as are the Investigator sheets. They are also easy to use.

A full play through of The Mummy of Pemberley Grange is available to watch on YouTube recorded as part of Melbourne International Games Week.