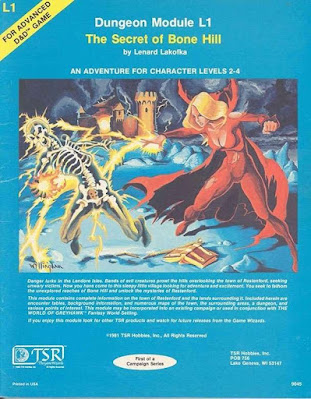 Designed by the late Lenard Lakofka, as the first part of a trilogy, L1 The Secret of Bone Hill is a scenario for Advanced Dungeons & Dragons, First Edition. Published in 1981, it presented something a little bit different for the world’s preeminent roleplaying game at the time—a sandbox, a town in which the adventurers could base themselves and explore from, locations to explore not just outside of town, but within its confines too, and an absence of plot. Or least an absence of a plot which would ordinarily drive or pull the Player Characters to explore the locations of keyed adventure module, for example, U1 The Sinister Secret of Saltmarsh. In essence, L1 The Secret of Bone Hill is really a setting source book rather than a traditional roleplaying scenario, one that would lay the foundations for the two scenarios which would follow, L2 The Assassin’s Knot, and eventually, L3 Deep Dwarven Delve, and would together form the ‘L’ series or the Lendore Isle trilogy.

The full history of L1 The Secret of Bone Hill, as well as the option to purchase a reprint are available here, but of course, the original came in the classic format for TSR, Inc. scenarios for Advanced Dungeons & Dragons, First Edition and Basic Dungeons & Dragons, a simple black and white booklet inside a separate card cover, inside of which were printed the scenario’s maps. The scenario introduces the town of Restenford and Isle of Lendore, part of the Spindrift Chain, far to the south in the World of Greyhawk setting. It recommends that the module is designed for novice and intermediate players, preferably between two and eight, using Second Level to Fourth Level characters. Then it begins not with a description of the town of Restenford or the Isle of Lendore, but wilderness tables and rumour tables, before going on to describe various wilderness locations around Restenford. These are located on the various around and overlooking Restenford, and include a temple where worship to the God of Chance takes the form of gambling, a den thieves, various campsites for travellers—and potential hirelings, and more.

The key location described here is the eponymous Bone Hill, atop which stands a partially ruined castle, around which there are signs of it having been under siege some time in the past. There is an odd atmosphere to place, occupied as it is during the day by a small tribe of Bugbears, and a small horde of the Undead during the night. There are some odd monsters too, such as the Ghoulstirge, a type of Stirge which not only feeds on your blood as standard Stirges do, but also paralyses its victims. Encounters above ground are relatively safe, but below ground they get nasty—more Undead, including a Wraith, a tough fight for adventurers of any Level, and they get weird, and even a little wondrous. Above ground there is a potions workshop where the concoctions are combinations of standard potions, such as a Potion of Longevity with a Potion of Speed, thus actually making use of the Potion Miscibility Table from the Dungeon Master’s Guide (!), but below there is a mirror which pulls the viewer in and forces him to fight himself, some not-Beholders (!) with treasure to guard and treasure to share, and afternoon tea with a surprisingly pleasant skeleton!

More than half of L1 The Secret of Bone Hill is devoted to detailing the town of Restenford, its keep, and their inhabitants. Besides the keep and its inhabitants, this description includes the town’s inn and tavern, homes of individuals such as Pelltar the sorcerer, Felix the mercenary, and a bait shop—Restenford being a fishing port. Notably, it includes a Burnt Guard Station, the shell of a guard station which has fallen into ruin, an actual adventuring location within the town itself. Throughout, there is a wealth of information given all of these locations, both in town and out, so if the Dungeon Master needs to know about animals, encounter probabilities, and what an NPC is equipped with, then she is well served by the module. However, what L1 The Secret of Bone Hill does not do is give support in terms of NPC motivation. Few of their descriptions include suggestions as what they want, and certainly no reason why they might hire the Player Characters. For example, there is a spy in the town from a rival duchy, a mentally ill abbot with designs on the daughter of the Baron of Restenford—though the Dungeon Master is advised to keep this a secret until she runs L2 The Assassin’s Knot, and a merchant whose nephew is interested in learning magic.

Rounding out L1 The Secret of Bone Hill is a short bestiary of new creatures in addition to several monsters given earlier, like the Ghoulstirge. These include the Spectator, a Beholder-like creature which readily guards treasure hoards, and the Stone Guardian, a new type of golem. This is followed by ten sample Player Characters, ranging from Second Level to Fourth Level. Most of them have at least one magical item.

Physically, L1 The Secret of Bone Hill is what you would expect from a TSR, Inc. module for Advanced Dungeons & Dragons, First Edition. The layout is clean and tidy, it is easy to read, and the artwork varies in quality—the back cover seems particularly poorly handled. Some of it, is actually very good. Overall, the maps are very good, but perhaps could have been better organised. However, the organisation of the module—rumour and wilderness tables first, then the adventuring locations, including Bone Hill, and lastly the description of Restenford—feel almost backward, but are more higgledy-piggledy than helpful.

Initial reviews of L1 The Secret of Bone Hill were less than positive. For Anders Swenson, writing in Different Worlds Issue 16 (November 1981), the issue was one of scale and randomness, stating that, “There are problems with the material as a scenario - a lot of the encounters seem to be random in nature, not closely related at all to any of the other groups of NPCs and monsters on the map. Given that the Baron of Restenford has a handy military force, why are these nests of monsters within a day’s march of his castle? How can the farmers gather their crops if the random outdoor encounter table is as dangerous as it is? And so forth.” In Ares Nr. 12 (January 1982), Robert Kern said, “The good news is that TSR is publishing a new module for low level characters. The bad news is that it might require a more experienced DM to overcome it omissions and shotgun method of presenting information.” Although he praised the functionality and description of the Restenford given in the module, he was far from positive in considering the motives for the players and their characters in exploring the region around the town.

Conversely, Jim Bambra, reviewing L1 The Secret of Bone Hill in Open Box in White Dwarf No. 35 (November 1982), were more positive. He wrote that the descriptions of both town and wilderness were “particularly colourful.”, such that “A good feel of the area is given and the whole module provides an excellent background for a campaign.”, before lamenting that, “Unfortuately [sic], it provides little more than this on a long term basis. L1 primarily sets a scene, with adventures along the way. Parts of L1 are not needed until the arrival of L2 and so trying to run this module on its own could prove to be a frustrating experience as the designer has given little indication of what L2 will contain or how many more modules there are likely to be.” However, he suggested that with the publication of its sequel, L2 The Assassin’s Knot, the module would be enjoyable and awarded the module a score of eight out of ten.

L1 The Secret of Bone Hill is regarded as a classic, but as a classic, it is a problematic one and it would have been a problematic one at the time of its publication. Geographically, the compact and dangerous nature of the region around Restenford with its cluster of threats and busy encounter tables, does feel just a little too forced, but neither of these is insurmountable, and it is possible to suspend any sense of disbelief that this might give rise to. However, the real problems are that as a module, L1 The Secret of Bone Hill is not ready to play and it does not have a plot—or at least a hook to play and adventure there. Indeed, the nearest it gets to plot is the blurb on the cover: “Danger lurks in the Lendore Isles. Bands of evil creatures prowl the hills overlooking the town of Restenford, seeking unwary victims. Now you have come to this sleepy little village looking for adventure and excitement. You seek to fathom the unexplored reaches of Bone Hill and unlock the mysteries of Restenford.”

Obviously, L1 The Secret of Bone Hill is not designed as a plotted adventure, but as a sandbox, but as a consequence of the lack of plots and hooks, it needs to be taken apart and be prepared as a playing environment, rather than as a straightforward plotted adventure. Reasons need to be developed for the Player Characters to come to the Lendore Isle, let alone go exploring and adventuring there. After all, the minimum Level for the Player Characters is Second rather than First Level, so they will have had some previous adventures. The inclusion of the extensive rumour tables support this, but nevertheless, the Dungeon Master still has to pull them out and link them to locations described elsewhere in the scenario, to create hooks which will pull her Player Characters into the setting and the plots that the rumours hint at, but are left undeveloped and unexplored. This process is not really helped by the lack of motivations for the many NPCs to be found in the module—the villains in particular, and it is not helped by the scattershot organisation which presents the adventuring locations first rather than the starting point for the Player Characters that is the town of Restenford.

For further information about L1 The Secret of Bone Hill and its author, Lenard Lakfoka, the Grognardia blog posted an interview with him in 2009. The first in three part series can be found here and is well worth taking the time to read.