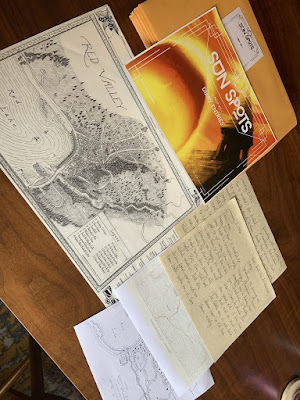 As well as introducing players to the cosmic horror of H.P. Lovecraft and the concept of playing ordinary persons—or investigators—pitched stopping the entities and their servants borne of an uncaring universe, Call of Cthulhu introduced something else. And that is, clues, and in particular, their associated handouts. For Call of Cthulhu is a literary game and an academic game, a game in which clues come in the form of letters, diaries, newspaper clippings, excerpts from Mythos tomes, and more. Which of course, means that they can all be copied and cut out for the players and their investigators’ perusal, and from the clues found, so push the play of the game forward. As scenarios and then campaigns grew in complexity, then so did their clues, and then so did their handouts...

Of course, the first sophisticated handout for Call of Cthulhu would arguably be the match book for the Tiger Bar in the Shanghai chapter of Masks of Nyarlathotep, and in some ways, just as Masks of Nyarlathotep has remained the preeminent campaign for Call of Cthulhu, so its handouts have remained as correspondingly important. Thus to accompany the most recent edition of the campaign, updated and adjusted for use with Call of Cthulhu, Seventh edition, The H.P. Lovecraft Historical Society has created the Masks of Nyarlathotep: Gamer Prop Set. With its one hundred and more props and handouts, this—even in its standard form—is a gorgeous looking collection and would deservedly go on to win the 2019 Ennie Award for ‘Product of the Year’. (Note that Reviews from R’lyeh has only had a chance to examine the Masks of Nyarlathotep: Gamer Prop Set and is not ashamed to admit that it would like to write a review of this and other prop sets.)

However, not every campaign or scenario warrants so lavish a treatment, but over the years there have been many efforts to support Call of Cthulhu’s use of handouts as props. For example, Chaosium, Inc. published the Beyond the Mountains of Madness Game Aid, which collected all of the handouts and supporting material for the pre-millennium campaign, Beyond the Mountains of Madness. Similarly, Pagan Publishing published GM Packs for many of its campaigns, such as that for Realm of Shadows. Many of these extras have become highly collectible, with correspondingly high prices, even though in some cases, they have not amounted to much more than a few sheets of paper.

Alongside this, another trend has allowed the Keeper to create more and more of her own handouts—the use of the personal computer and inexpensive Desktop Publishing software. Previously, a Keeper might have written out a handout and then soaked it in tea before drying it out in the oven to get that effect of its being old, and whilst she might still do that today, she is just as likely to create something her computer—a letter, a diary entry, a newspaper article, a map, and the like. This also means that publishers can do the same, whatever their size. So it is with Dave Sokolowski and Weird 8, who has released the Sun Spots Prop Kit, a set of handouts for the 2016 scenario, Sun Spots. Set in 1926, west of a wintery Boston in the resort town of Red Valley where sun-worshippers are taking advantage of the unseasonably warm weather and a father—accompanied by the investigators—have come to retrieve his daughter, whom he believes to have fallen into immoral company. Of course, nothing is as it seems, for that immoral company turns out to be sun-worshipping cultists, more and more of whom flocks to the town the heat grows and grows, threatening burn it—and more—down.

The Sun Spots Prop Kit is a simple envelope, inside of which are just four items. The first of these is the first of three maps in the Sun Spots Prop Kit. This is an A3-sized, double-page spread of the town, drawn in topographical style, and done as the sort town map you might find at a tourist office or a hotel. It even comes with marked and numbered location as well as list of adverts down one side. This gives it a lovely verisimilitude. The second prop consists of several entries in the daughter’s diary over a couple of sheets and they are nicely presented with a slightly rough and idiosyncratic feel to the handwriting. The handwriting is large and easy to read, but with elements that make it just a little harder to read in places—just like the handwriting of you or I.

The second map—and third prop—is a simple plan of the town of Red Valley. This feels much more a handout rather than an in-game map like the first one, but is clear and simple. The likelihood is that this map was designed to accompany the third map—and fourth prop, an elevation map of the valley around the town of Red Valley. Now in Sun Spots, only the fourth prop was included in its pages, rather than including a map of the town. So, the Sun Spots Prop Kit certainly fixes that omission. Of the two maps, the elevation map is the only one done in full colour and it has a pleasing delicacy to it matching the area maps of the period.

Physically, the Sun Spots Prop Kit is solidly presented. All four items are printed on weighty paper stock and feel good in the hand.