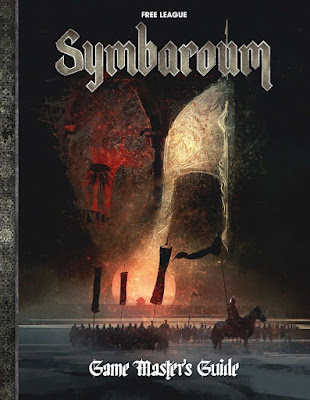 The Symbaroum Game Master’s Guide is a supplement for Symbaroum, the near-Dark Ages fantasy roleplaying game from Swedish publisher, Free League Publishing. The supplement does two things. First, it collects and collates material from previous titles for the Symbaroum roleplaying line, but not only that, builds upon them. The titles include the Advanced Player’s Guide and Monster Codex, as well as Thistle Hold – Wrath Of The Warden, Karvosti – The Witch Hammer, and Yndaros – The Darkest Star. Second, it builds on and expands on this content as well as adding new content of its own. This has a number of consequences. First, in replicating content from previous titles, there is a sense of redundancy to it, more so if the Game Master already has those supplements. Second though, in collating the content, it brings it all together in one place for easy reference, and that does mean it is useful. More so, of course, if the Game Master lacks one or more of the earlier volumes it draws from

Intended as the capstone to the core books for Symbaroum, the Game Master’s Guide essentially explores the adventures, challenges, and rewards to be had in the setting, giving advice and practical suggestions  that the Game Master can bring to her game. It is divided into three sections, each of which is further divided into chapters. The first section, ‘The Adventure’ essentially covers the design and creation of game worlds, chronicles, and landscapes—the latter better known as scenarios or adventures. It begins with the primary building blocks such as theme—most obviously Symbaroum’s ‘struggle between civilisation and nature’, stories, and tone, before adding secondary building blocks such as history, nature, cultures, population, and more. It guides the Game Master through the process, and then it does the same for chronicles—better known as campaigns, from establishing a chronicle’s theme and the importance of the first adventure through the course of the chronicle to its climax. Adventure landscapes are treated in the same fashion. The opening chapters of the Game Master’s Guide narrow their focus again and again, going from an overview down to individual scenarios, throughout referencing various scenarios for Symbaroum, as well as the Crown of Thorns campaign begun with Thistle Hold – Wrath Of The Warden.

However, these opening chapters are not overly engaging, particularly early on when examining the base building blocks. The references, especially to roleplaying games from Free League Publishing for other than Symbaroum feel somewhat superfluous and the chapters feel overwritten. This is not to say that the advice is poor, but the writing becomes more engaging and to the point when subject being covered is more specific, for example, when discussing the concept of Troupe Play in Symbaroum, in which the players take the roles of more than one character, suggesting the roles that the players might take in particular organisations. Thus, for a Barbarian village, the first set of Player Characters would be the chieftain’s council, the second his guard warriors, and the third, common villagers. ‘Adventures for Heroes’ gives advice on presenting scenarios and encounters for experienced Player Characters, not just adjusting the enemy’s numbers, but also adapting the enemy’s tactics and altering the terrain. It also suggests weaknesses against particular character types, not necessarily to defeat them, but rather to present such characters with challenges. So for the giant berserker with a two-handed weapon, the Game Master might counter with ranged enemies, monsters which bind or hinder movement, and enemies using mystical powers.

More specific to the setting is ‘Under, Above, and Beyond’ which explore the realms beyond Ambria and Davokar—the Underworld, the Yonderworld, and the Spirit World. It covers what might be found in each as well as encounter tables, adventure suggestions, and more. None of this is intended to be definitive, but more a guide for the Game Master for the few occasions when her Player Characters have to visit or traverse such realms. Again, more specific, ‘Goal Oriented Roleplaying’ presents objectives that the Player Characters might want to achieve, such as a conquest or staging an expedition, and examines each through five phases, the problems and challenges that they might face. Here the Game Master’s Guide most obviously draws from, and builds on, content from Thistle Hold – Wrath of the Warden and the Symbaroum Monster Codex, so is much more a case of developing content further along with the straight reprint and presenting it in the one location.

The practicality of the second section, ‘Challenges’, means that the focus in the Game Master’s Guide strengthens further. ‘Advanced Traps’ is useful for adding to the tombs and treasure vaults know to be located in the Davokar Forest and comes with some rather nice illustrations reminiscent of Grimtooth’s Traps, whilst ‘Pitched Battle’ enables the Player Characters to take to the battlefield, whether as combatants or commanders. It is an abstract system which calculates battle odds via the ratio between attackers and defenders, adjusting for factor such as resistance levels and battle location, to determine the outcome and casualties suffered. It also allows for random events, such as waking amongst the dead or being saved by allies, whilst an adjacent article provides a good examination of the nature of Ambrian Wars. This covers the Great War, the invasion of Ambria, and the battles of Karo’s Fen, as well as discussing the tactics used by the Dark Lords, the Ambrians, and the Barbarian clans. However, what the ‘Pitched Battle’ rules lack are an example or two, not an issue with the ‘Managing a Domain’, which puts the Player Characters in charge of a small fiefdom, from a fortified farm to a small market town. It includes events and improvements which can occur over the course of a year, as well as ways to protect the domain should it come under attack.

Equally as well supported by examples are the rules for ‘Social Challenges’, which cover Player Character scheming as well as tracking the relationships between them and Symbaroum’s various factions. However, the Player Characters’ favour with any one of the factions will wax and wane, so it is not merely a case of doing a deed or conducting a task to gain a faction’s support, but doing more deeds and conducting further tasks to maintain that support.

Travelling through and exploring the Davokar forest comes under the spotlight in first ‘Expeditions in Davokar’, followed by ‘Exploring Ruins’. These are perhaps the most familiar chapters, covering content previously presented in Symbar – Mother of Darkness. ‘Expeditions in Davokar’ covers the dangers and travails of moving through the forest—planning, misfortunes, companions, treasures to be found, reasons to delve underneath the canopy, and more. ‘Exploring Ruins’ provides a set of tables for the Game Master to create various that might be found in the forest. The penultimate chapter in the section, ‘Ceremonies’, expanded from The Darkest Star, covers powerful rituals the casting of which comes with significant corruption and side effects, and which are outlawed by the Ambrians. Numerous examples are given, but for the most part, these remain the province of NPCs and likely events which the Player Characters will either have to investigate, prevent, or interrupt. Lastly, ‘Legendary Creatures’ draws on the Monster Codex to present legendary, climatic challenges for the Player Characters, such as Sakofal the Slaughterer, legendary dragon, recently awoken and emaciated, and very, very hungry…

The third section, ‘Rewards’, is the last and shortest, consisting of two chapters. The first, ‘Enhanced Rewards’ covers everything from thalers to artefacts as rewards, but there are some non-traditional options too, including ‘burdens as rewards’. The idea being that the Player Characters will have faced great, probably stressful challenges and dangers, and the likelihood is that they will come away hurt in body or mind, if not both. This is an interesting way of developing a Player Character, plus the ‘burden’ grants both roleplaying opportunities and Experience Points! The second, ‘Great Artifacts’ gives almost unique devices of a magical nature, such as Bunefor’s Death Mask, which enables the wearer to find gaps in an enemy’s armour as well emit a piercing scream under certain circumstances or Desdemorgos’ Iscohedron, a device which protects the user against environmental corruption, but which also allows the user to draw corruption and use it as an attack! Each of the artefacts comes an adventure hook ready to develop.

Physically, the Game Master’s Guide is up to the standard you would expect of the Symbaroum line. It needs a tighter edit perhaps in the earlier chapters, but is otherwise well written and the artwork is up to the usual standard.

As much as the Game Master’s Guide reprints content from previous titles, it also expands upon them and it collates them, all in one handy reference tome. In doing so, it supports whatever type of campaign set in Symbaroum the Game Master is running, whether that is the Crown of Thorns or one of her own devising, with advice on set-up and theme, handling traps and ruins, Player Character goals and rewards, and really, quite a lot more. It goes further though, in offering ideas and suggestions for running campaigns in Symbaroum other than that presented in the Crown of Thorns campaign. The chapter on troupe play lends itself to roleplaying and adventure opportunities aplenty, as does managing a domain, so that a campaign could be location-based rather than travelling hither and thither.