#WeAreAllUs: The Adventure of the Great Hunt 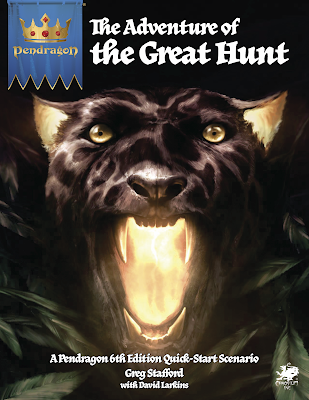 In 2020, King Arthur Pendragon is thirty-five years old and in that time it has seen five editions, the last of which–apart from some minor updates, appeared in 2008. In that time, the award-winning King Arthur Pendragon—still the preeminent roleplaying game that explores Arthurian legend, has not received a quick-start, a means of introducing the setting, the mechanics, and the style of play. That changes with The Adventure of the Great Hunt, the quick-start designed to introduce Pendragon, Sixth Edition released  to observe the third anniversary of its designer’s—the late Greg Stafford—passing. As with any good quick-start, it is designed to introduce and explain the core rules, provide a scenario which can be played in a single session, and the pre-generated characters necessary to play. The new version of Pendragon is intended as Greg Stafford’s ‘ultimate’ edition and whilst the style and play of the game remains the same, there are a number of modifications to the rules—as evidenced in The Adventure of the Great Hunt.

For anyone coming to The Adventure of the Great Hunt via King Arthur Pendragon, rest assured that the fundamentals have not changed. Players take the role of knights seeking Glory and honour during the reign of Arthur, King of the Britons; a knight will primarily be defined by his physical attributes—there is no equivalent of the Intelligence stat in Pendragon; a knight’s personality will be defined by thirteen pairs of opposed Traits, such as Chaste and Lustful, Just and Arbitrary, and Valorous and Cowardly, which can guide his decisions, help him pass (or fail) a moral test, influence others, and so on; a knight may be swayed by his Passions, such Love (Family) and Hate (Saxons); and the mechanics still involve the rolling of a twenty-sided die.

The rules to The Adventure of the Great Hunt and thus the basics of Pendragon, Sixth Edition—whether coming to Pendragon for the first time or having played previous versions of King Arthur Pendragon, are explained with no little efficiency. It covers the core mechanic—rolling under a skill, attribute, trait, or passion, on a twenty-sided die, with the critical success being equal to the exact value of the target, and a natural twenty being a critical failure. It also explains how skills, traits, and passions can be rated above twenty. Traits and Passions of sixteen or more, are of course, something that a Knight is considered to be Famous for, whilst he is Exalted if they are twenty or more. The Adventure of the Great Hunt explains the results when Passions are invoked, typically an Inspired +5 bonus to a skill on a success and an Impassioned +10 bonus on a critical success, but a loss of a point of the Passion on a fumble as well as several days of melancholia—or oven madness, depending upon if the Passion is Famous or Exalted. Mechanically, Passions are a great way of Knight gaining a bonus to his next actions, but they are simply great roleplaying hooks too.

Combat is resolved using opposed rolls against the combatants’ skills, for example sword versus sword or spear versus axe. To make a successful attack, a knight’s player must successively roll under his attack skill and roll better than the opposing knight’s player. It is possible for both players to make successful rolls, in which case the player with the lower result has achieved a partial success and although his knight does not inflict damage, he can use his shield or weapon to help block damage from the incoming attack. The combat system allows for dropped or broken weapons on a Fumble, for a Knight to be knocked down if the base damage—before armour deducts any points—inflicted in greater than his Size attribute, and Major Wounds to be suffered if the damage inflicted after armour stops it is greater than a Knight’s Constitution. Understandably, given the historical period in which Pendragon, Sixth Edition is set, Major Wounds are difficult to recover from. So woe betide any Knight who suffers a critical strike in combat—the base damage for most weapons is four six-sided dice, and critical strikes add another four six-sided dice!

As well as healing, mounted combat, and so on, the last thing that The Adventure of the Great Hunt covers is the squire who a Knight is responsible for training in arms, courtesy, and the other skills necessary to bear the title of knight. In return, the squire is a servant for his Knight and may conduct certain actions in combat, such as rendering First Aid, and bringing a new weapon or a fresh horse should a Knight need them.

The scenario in the quick-start is ‘The Adventure of the Great Hunt’. Set during the Conquest Period of Arthur’s reign, it can be played in one long session or two shorter ones, and is suitable to be run as a one-shot or as part of a campaign. If part of a campaign, the Player-Knights will gain Experience Checks for critical successes, as well as Glory for their actions. If run as a one-shot, the Player-Knights will simply gain Glory, and the Knight who gains the most Glory over the course of the adventure will be the one best remembered in the tales told about its events in the winter months to come.

As the title suggests, ‘The Adventure of the Great Hunt’ involves a great deal of hunting—of creatures great and small, Courtesy, Orate, travel, one of their unmarried sisters, and logistics! The scenario comes with a built-in time limit and it is entirely possible for the players to scupper their Knights’ efforts if they are too inefficient in terms of where they decide to travel to. It begins with the Player-knights as guests at the hunting lodge of Sir Servause le Breuse, a veteran knight and renowned hunter, when suddenly their discussions are interrupted by the arrival of Sir Ector, the foster-father of King Arthur Pendragon! He seeks the aid of Sir Servause le Breuse in either slaying or driving off a fearsome dragon which is ravaging some of his holdings in Norgales (North Wales). There is the chance here that one or more of the Player-knights will valorously, if not prudently, decide to rush off and attempt to slay the dragon himself—or help Sir Ector do so. Fortunately, for more Player-Knights, their host has a plan, and this forms the meat of the scenario.

The plan requires the sweet perfume that is the belch of the panther!

Ordinarily, every other beast in Christendom—and likely beyond, finds this scent to be attractive and fragrant, but not the dragon. To such a fearsome creature, it is a stench, a small so strong it will drive the beast into a torpor, or even deep into the earth. To gain such an eruction, the Player-Knights not only have to acquire a Panther, but also such beasts whose special qualities are so efficacious to a Panther’s digestion that it will emit the richest and most pleasing of belches, and so have the greatest effect upon the dragon! So begins the great hunt!

‘The Adventure of the Great Hunt’ will see the Player-Knights travel back and forth across England to the various locations where Sir Servause le Breuse suggests the desired beasts may be found. Many times, this will see the Player-Knights pursuing various beasts, such as cranes in the fens of Anglia or stags in the nearby forest, on day-long hunts using the given hunting and pursuit rules. However, not every creature can be obtained with as simple a task as a hunt, and the Player-knights have opportunities too to persuade the great and the good of the land to lend them their aid and their beasts. There is even a hunt which will not involve the Player-Knights at all! Ultimately—and if they are in time, the Player-Knights will have assembled their menagerie, driven it Norgales, fed the panther, satisfied its appetite, and have eruct the sweetest of belches imaginable!

Of course, this is all up against the time limit and the Player-Knights may not necessarily have acquired sufficient beasts and not fed them to the panther in time—and so, there is the chance that they will fail. There is also the chance that Sir Ector may not wait around long enough for them to arrive and ride out in one last valorous attempt to drive off the dragon from his lands… So as much as the Player-knights to be successful in obtaining the necessary animals, they really do need to effectively manage their time.

In addition to the stats for the NPCs and various beasts, The Adventure of the Great Hunt comes with six pre-generated Player-Knights. They include an adventuring knight, a champion knight, a courtier knight, a hardy knight, a hunter knight, and a religious knight. The hunter knight will be the most obviously useful, but all of the knights will have a chance to shine in the adventure. The adventure includes a map showing the locations of where the various creatures may be found and the travel distances between each location. The Game Master will not only want to provide the sample Player-Knights for her players, but also some tokens to track the Player-Knights and their various quarries on the many hunts they have to undertake, and probably a calendar to track how many days the Player-Knights have spent on their tasks so far and how many they have left.

As well appointed as The Adventure of the Great Hunt is, there are one or two issues with it. It would have been nice if the pre-generated Player-Knights had been given a single sheet each and perhaps an explanation as to what makes them stand out. That would have been useful for players new to Pendragon rather than just Pendragon, Sixth Edition. Also a list of names, both male and female as the Knights can be ‘Sirs’ and ‘Dames’, would have been useful for ease of play—especially if The Adventure of the Great Hunt is run as a convention adventure, for not only do the players have to name their Knights, they also have to name their squires. Another issue is with the map. It is not obvious where the Player-Knights start. Reading through The Adventure of the Great Hunt, it becomes clear that it is the site of the stag hunt, but it is not clear from the text.

Physically, The Adventure of the Great Hunt is well presented. It is neat and tidy, and easy to read. The illustrations are suitably medieval in style and the monkish marginalia adds to the PDF’s illuminated style.

As has been stated before, King Arthur Pendragon is Greg Stafford’s masterpiece, design classic, a master class in using mechanics to both model its Arthurian genre and to encourage its players to roleplay its knightly character types, in a setting that was a labour of love upon the part of the author. The Adventure of the Great Hunt is a great introduction to knightly adventuring in the time of King Arthur, efficiently explaining the rules and key mechanics before presenting the players and their Knights with a grand challenge, and constantly testing them throughout using a variety of skills, traits, and passions.