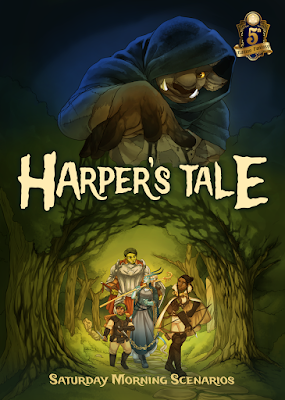 Harper’s Tale: A Forest Adventure Path for 5e is a campaign for Dungeons & Dragons, Fifth Edition. Funded via Indigogo and published by Saturday Morning Scenarios, it is an adventure path of ten connected scenarios which will take the Player Characters from First Level to Tenth Level and is designed for players as young as ten. This is reflected in the name of publisher—Saturday Morning Scenarios—for the fantasy of Harper’s Tale is very American, being that of Saturday morning cartoons, so light in tone and with elements that are simply cute, such as Sir Cheddar, a magic-wielding Corgi, and Fred, a rainbow-maned, purple Allicorn—both of whom are likely to join or aid the Player Characters, but nevertheless still with elements of peril. However, its fantasy is neither grim nor dark, so it is thus suitable for a younger audience. Some older or more mature players may perhaps find its fantasy too light in tone, but that tone also means that Harper’s Tale is suitable for a family audience.

Notably, Harper’s Tale is the final result of a successful fundraiser for Friends of Kids with Cancer. This was because the publisher’s youngest daughter, Harper, was diagnosed with leukaemia. Fortunately, Harper is in remission, and in response to the support that she and her family received during her treatment, she and her father decided to devise a story for a Dungeon & Dragons adventure book, which once she was discharged, was developed into a proper outline. This is because Harper is a gamer and enjoys creating stories. Her father took the outline and together with a team made up of industry luminaries, including Jeff Stevens, Ben McFarland, Brian Suskind, Hannah Rose, Ashley Warren, Kienna Shaw, Bill Barnett,  MT Black, Donathin Frye, Anna Landin, Gwendy B, Anna Meyer, Dyson Logos, Jessica Ross, Kobold Press, Petersen Games, and more, has brought it to print.

The campaign begins in the village of Grove. Whether the Player Characters are merely passing through, visiting, or returning home, they discover a farming community devoid of its inhabitants, its animals run amok, its crops in danger of rotting before they are harvested. Eventually they will find two villagers, the sisters Rose and Grace, who can tell them what happened. The other villagers have all fallen asleep and cannot be woken, the sisters caring for them as best they can. Further investigation as the source of the illness points to the activities of outsiders and a previously unknown series of caves underneath Grove. Here, the Player Characters will encounter the first of a number of entertaining NPCs whom the Dungeon Master will undoubtedly enjoy roleplaying. Most obviously, this will be Sir Cheddar, the magic-using Corgi who will join the party on its adventures, but they also include a Goblin hermit, an out-of-his-depth Wizard, and more…

From the caves, the clues lead onto a number of other settlements which also seem to have been beset by strange illnesses and outbreaks of odd behaviour. The highlight of these is the seventh adventure, ‘The problem with Prattle Creek’, where amidst a rash of sickness and bizarre happenings, the town is being visited by Professor Piewright and his travelling medicine show with promises of a cure for that ails the townsfolk. Amidst the oddness, a murder occurs and in the ensuing investigation, the Player Characters will discover further links to the overarching plot. Of course, the ‘Snake Oil Salesman’ nature of the encounter is pure Americana, enforcing the ‘home on the range’ feel of earlier encounters, whilst giving the Dungeon Master a fun NPC to portray in the form of Professor Piewright.

For the most part, the encounters and scenarios in Harper’s Tale are rural or forest-based in nature, barring the larger cave system near the campaign’s start, there is very little in the way of traditional dungeons—and what there are, is not necessarily very interesting. Thankfully, the other encounters make up for it, much of the middle part of the campaign involving the Player Characters’ attempt to gain an audience with Deng, the arch-druid of the forest who might have a cure to the rash of poisonings and illnesses flooding the region—not once, but twice, and then going out to find the necessary ingredients. There is even a touch of the Lovecraftian here as the search for ingredients takes the Player Characters into the forests within the Dreamlands and back again, where they will encounter both Zoogs and Cats of Ulthar. In general, the encounters and scenarios will reward the player and their characters for clever play and roleplaying than the use of brute force, the encounters and scenarios themselves primarily requiring exploration and investigation.

Each of the ten encounters is presented in a similar format. Each gives a synopsis of the adventure, hooks to the adventure if not played as part of the campaign, a description of the locations in the adventure plus any events which will happen, and the conclusion. Each is followed by an appendix containing all of the stats for the scenario’s monsters and NPCs, plus any magic items. In general, they are well organised, and the hooks for running them separately decent enough. However, the scenarios do all work together and even with a coterie of different authors, the publisher has done a good job of keeping the tone and feel generally consistent throughout.

Harper’s Tale comes with eight pre-generated adventurers. They include a Faunkind Fighter, a Lion Paladin, a Tielfling Cleric, a Firbolg Druid, a Panthaka Monk, a Human Barbarian, a Gnome Wizard, and a Halfling Bard. This is a mix of traditional and non-traditional races, some of which may not be necessarily familiar to Dungeon & Dragons players. All eight are presented with a full colour illustration and their character sheets are tidily presented and easy-to-read. However, of the octet, given the campaign’s forest setting, it seems odd that a Ranger is omitted, but more problematically, the campaign includes challenges involving the use of thieves’ tool, and so the inclusion of a Rogue would have been more useful. Perhaps another useful addition for the Dungeon Master would have been some advice on creating the type of Player Characters presented in this set of pre-generated ones, especially as fall outside of the scope of the standard options in Dungeons & Dragons.

Physically, Harper’s Tale is well presented and has a bright and breezy look to it. The artwork in particular, tends towards more vibrant or pastel colours, which further enhances the tone of the campaign. However, in places, the book needs another edit and could really have done with a campaign overview before diving into the first episode. The background and story to the campaign is simple enough, but the Dungeon Master should not really be discovering the backstory as she reads through the campaign. There are also a couple of issues with the maps. One is that some of them are not quite as well presented as they could have been, another is that the regional map, showing the location for all ten of the campaign’s episodes is decidedly bland. The campaign could also have done with more maps, in particular those of individual buildings and their immediate surrounds, to help the Dungeon Master bring them to life during play.

Harper’s Tale is not perfect, it is underdeveloped in places and slightly unpolished in others, such the Dungeon Master will need to do more preparation than the campaign really needs. Those, however, are issues with the production rather than the core story and its adventures, which are light and accessible, and supported by some entertaining NPCs. Overall, Harper’s Tale is an enjoyably light, straightforward campaign for Dungeons & Dragons well suited for a younger or a family audience.