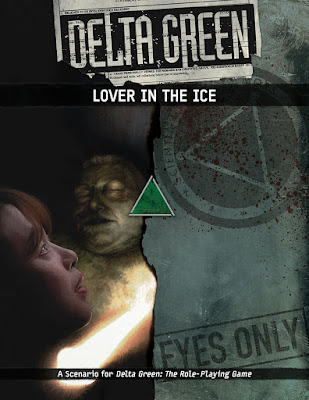 Lover in the Ice, a scenario for Delta Green: The Roleplaying Game carries the proviso that it is, “Recommended only for the most resilient players and Agents”. Be advised that this warning is well deserved, for the horror in Lover in the Ice is of a horrifyingly adult nature, being body horror akin that of the 1979 film Alien, but combines it with the almost viral-like vector of John Carpenter’s The Thing and a psycho-sexual drive of a David Cronenberg film that ramp up its intimately sexual elements to disturbing levels. Whilst most horror scenarios are of an adult nature and require a mature audience, the horror in Lover in the Ice is of an unremittingly intense, if not extreme timbre, which would be very difficult to tone down. However, if a playing group is prepared for it and are forewarned about the strength—though not necessarily the nature—of horror in its pages, Lover in the Ice will deliver a memorably vile investigation into something that should not be…

Published by Arc Dream Publishing, what Lover in the Ice has in common with so many other scenarios for Delta Green: The Roleplaying Game, is that it is about ‘Investigation, Containment, & Denial’—and it really plays up the Containment angle. As is tradition for a Delta Green: The Roleplaying Game scenario, it begins with a telephone call. The Agents are to go to Lafontaine, Missouri which is currently caught up in an apocalyptic ice storm which has shut down and isolated the town. As the Agents may come to realise, although this might hamper their investigation, this is a very, very good thing. An alert has been triggered on a Green Box, one of the private storage areas—typically a rental storage unit, but it could be the boot of a car in a used vehicle dealership—where Agents can store valuable resources such as equipment and arms and materiel, as well as dump evidence of their activities and investigations in relative safety. In this case, the Green Box is at a storage rental facility in Lafontaine and the Delta Green ‘Friendly’—the employee at the facility paid to keep an eye on its has not responded. The Agents need to ride the relief efforts in Lafontaine, locate the ‘Friendly’ and find out what he knows, then verify the contents of the Green Box, determine if any of it is missing or has been stolen, and if so, get it back.

This though, is only the start. The Agents will at least need to establish the veneer of their cover before launching the investigation proper, but clues can be found almost from the off, and the Investigators are likely to be faced by a steady flow of them as they conduct their investigation—almost dauntingly so. The players really do need to be taking notes throughout and linking the clues to gain an understanding of both the backstory and what is actually going on—and ultimately, the threat that represents. Which means that the handler needs to read Lover in the Ice carefully to have that understanding herself. For the most part, the clues veer from signs of weirdly sexual activity to bloody murder scenes and back again, but the author gives the Agents a pause early in the scenario with an inventive array of weird and peculiar artefacts and not-tomes—mostly unexplained—which they need to examine and verify that were stored in the Green Box. Of course, major clues as to what was going on can be found here too, and the Agents are likely to suspect that they tie into some the oddness they will already have discovered. All of this should hopefully prepare them for the horribly bloody, even intimate encounters and confrontations with the threat at the heart of Lover in the Ice which become more dangerous each time they happen.

The environment for the investigation in Lover in the Ice also plays a part, although not as an active a part as you would think, and a Handler might want. It has two effects, one immediately obvious, one not. Not wanting to spoil the nature of the not so obvious one, the primary and obvious effect of the ice storm is to constrain the limits of the investigation. Not just in terms of geography, but also in the size of the cast in the scenario—the Handler really only has the one NPC to roleplay throughout the whole scenario. This only serves to heighten the sense of isolation in Lover in the Ice already present from limitations upon the physical senses due to the storm and the weather and the limited capacity to contact the outside world. However, the weather has no other physical effect on the scenario, and it will be up to the Handler whether she wants to enforce the effects and limitations upon her Agents when investigating in a severely cold environment.

As constrained as the environment for Lover in the Ice is, one of its major problems is that it is lacking a map of Lafontaine. The investigation has a Geographic Profiling aspect to it, and it would have been nice if the Agents had been able to spread open a map and plot the clues on a handout. The other issue is that not all of the monster NPCs are given stats. Neither problems are insurmountable, and the Handler should be able to create both the stats and a map with a little effort. That said, she should not have to, given that the last two pages of Lover in the Ice consist of a Delta Green Agent sheet, which to be honest, is superfluous here.

Lover in the Ice is very much a player and their Agents driven scenario. Its plot is already in motion and the Agents are essentially tracking that down in order to contain the threat. Again, a map of the location for the scenario’s denouement—climax would probably have been an inappropriate description—would have been useful, but again the Handler should be able to find one. In comparison to the investigation, the denouement does feel slightly underwritten, but the conclusion does highlight how the Agents’ failure to contain the situation in Lafontaine is likely to turn into a storm of another nature…

Physically, Lover in the Ice, as with so many other scenarios for Delta Green: The Roleplaying Game, is for the most part neatly laid out and well written. Its clues and handouts are nicely done and the details on the floorplans included are a huge improvement in terms of detail in comparison to other scenarios.

Essentially, The Thing in the ‘Show Me State’—as Missouri is also known—the likelihood being that the players will be going, “No, please don’t show me!”, is as nasty a slice of physical horror that Delta Green: The Roleplaying Game has ever served up. Its adult tone and the nature of the horror simply will not be for every player—and the Handler should take that into account when deciding to run Lover in the Ice. If however, the Handler does decide to run it and with the right group of player, Lover in the Ice combines a rich welter of clues and investigation with desperately disturbing horror.