Jonstown Jottings #29: A Tale of Woodcraft 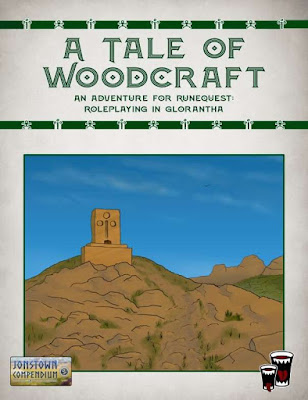 What is it?
A Tale of Woodcraft is a scenario for use with RuneQuest: Roleplaying in Glorantha.
It is an eighteen-page, full colour, 13.15 MB PDF.
The layout is clean and tidy, and the illustrations good. It very much needs another edit.

Where is it set?
A Tale of Woodcraft can be placed anywhere where an Aldryami forest is located adjacent to a Human settled area. It also requires a route which has been rendered impassable, for example, a ravine crossed by a broken bridge, a river in flood, or a mountain pass blocked by a landslide. The scenario also requires an area where agents of the Lunar Empire might be operating.

The default given area in A Tale of Woodcraft is Sartar.
Who do you play?
No specific character types are required to play A Tale of Woodcraft, but Troll characters or characters with Lunar connections will be at a disadvantage. A literate Player Character might also be useful, but not absolutely necessary.

What do you need?
A Tale of Woodcraft requires RuneQuest: Roleplaying in Glorantha. RuneQuest – Glorantha Bestiary will be useful.

What do you get?
A Tale of Woodcraft is an on-the-road adventure, much like the earlier Vinga’s Ford, also from Beer with Teeth. However, where Vinga’s Ford has a specific location, A Tale of Woodcraft has flexible geographical requirements.
The scenario finds the Player Characters on the road when they find their route blocked. This can be because of a flooded river, a landslide, or a broken bridge—the latter the default in A Tale of Woodcraft. The likelihood is that the blockage will take days to clear or repair and so an alternative route is suggested—a rough path which will take the Player Character up and around the obstacle via a high tor. They are not the only ones on the steep route though, they are followed by a group of older men and a group of Aldryami seems to be pacing them on the path opposite. It quickly becomes apparent that the two groups are coming to meet each other for a ceremony, and that this is a regular occurrence. However, the tense nature of the meeting is threatened by the inadvertent appearance of the Player Characters as does the discovery of a strange box nearby…
A Tale of Woodcraft involves two plot strands that nicely dovetail into each other, one of which at least, may have consequences for the Player Characters for years to come. One is the ceremony, which involves formally confirming a longstanding peace between the nearby tribe and a decidedly prickly Elf, the other the contents of the box, which once determined, are likely to lead to a confrontation with some fairly tough opponents. Whilst the latter is likely to offer the opportunity for some combat in what is the scenario’s climax, the former involves a mix of roleplaying and exploration. This requires some delicacy upon the part of the Player Characters, lest a diplomatic incident occur, and ancient, near-forgotten hostilities break out once again…
However, the scenario feels slightly overwritten in places and the Game Master will need to give it a careful read through prior to running it, especially to understand its plot strands. That said, it comes with some interesting further plot hooks and the story nicely mixes tradition with inadvertent foul play.
Is it worth your time?
Yes—A Tale of Woodcraft presents an entertaining roleplaying challenge, a mystery, and some action, that all together neatly packaged on route somewhere for easy addition to a campaign.
No—A Tale of Woodcraft is not worth your time if you are running a campaign involving Lunars or Trolls, or set far away from the Lunar Empire.
Maybe—A Tale of Woodcraft needs a careful read through prior to being run and maybe too complex for a simple sidetrek-style adventure.
Posted by pookie at 12:00