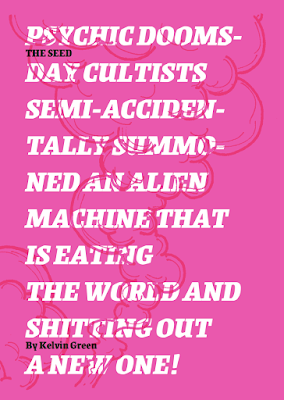 Kelvin Green hates small villages. He must do. After all, in Fish Fuckers – Or, a Record, Compil’d in Truth, of the Sordid Activities of the People of Innsmouth, Devon, he unleashed aspects of H.P. Lovecraft’s ‘The Shadow Over Innsmouth’ on a small west Country village with piscine horrors wanting to procreate with the inhabitants of said village, whilst in More Than Meets The Eye: A Short Adventure with Lots of Tentacles, he unleashed a weird, fantasy homage to a certain franchise of films involving giant robots capable of transforming into everyday objects, but with aliens/not-shoggoths rather than robots. Both scenarios are written for use with Lamentations of the Flame Princess Weird Fantasy Roleplay, whereas the third of what has become Kelvin Green’s ‘village vitriol’ trilogy is a systemless scenario. However, despite the scenario being systemless, it is set during the Early Modern Age, between 1625 and 1725—the default period for Lamentations of the Flame Princess Weird Fantasy Roleplay, and its tone and playstyle matches that of the Old School Renaissance.

The Seed, published by Games Omnivorous, is a system agnostic scenario of fantasy horror which would work with any number of Old School Renaissance retroclones. The most obvious one is Lamentations of the Flame Weird Fantasy Roleplay, another is the publisher’s own 17th Century Minimalist: A Historical Low-Fantasy OSR Rulebook, but with some adjustment it would work with Cthulhu by Gaslight or a darker toned version of Leagues of Gothic Horror for use with Leagues of Adventure: A Rip-Roaring Setting of Exploration and Derring Do in the Late Victorian Age! Take it away from its European setting and The Seed would work well with Mörk Borg as they share a similar tone and sensibility. Notably though it adheres to the Manifestus Omnivorous, the ten points of which are:

So yes, The Seed adheres to all ten rules. It is an adventure, it is system agnostic, it takes place on Earth, it has one location, it has the one monster (the others are extensions of it), it includes Osteophagy—the practice of animals, usually herbivores, consuming bones, it involves a voracious eater, the word count is not high—the scenario only runs to twenty-eight pages, and it is presented in two colours—in this case, fluorescent pink and black. Lastly, The Seed does lack good taste. Be warned, just like The Feast on Titanhead before it, this scenario is one of gut churning—in some cases, literally—horror, bodily fluids, and madness.

The setting for The Seed is the village of Midwich. And being the village of Midwich, it has its own cuckoo—a giant alien terraforming bio-machine which sits at the centre of the village and pumps out a fluorescently pink, corrosive—mentally and physically, miasma which rots mind, body, and anything else it envelops. Its aim, or rather it is programmed to transform the planet into a world suitable for colonisation by an alien species from another dimension. Which requires that it is fed, which is why a bunch of misogynist cultists—members of the Final Brotherhood—are feeding whatever organic material they can into the Seed’s greedy maw, whilst phallic-headed alien dogs which ejaculate acid patrol the mist and protect the Seed. Meanwhile, the Storm Society, a semi-secret scientific society has sent agents—inspired by a pair of Marvel Comics’ legendary creators, to investigate the Seed and what it is doing in Midwich. So, at some point, the Player Characters should expect figures in diving suits to loom out of the fluorescently pink gloom…

Which is the point at which the Player Characters turn up. Perhaps they want to find someone in the village, or the Storm Society has sent them to check on its agents already in Midwich, but whatever their reason for being in the village, they find something really weird going on. Of course, to determine what requires penetrating the pink miasma and potentially suffering its deleterious effects, ranging from hair loss and sudden uncontrollable anger to constant vomiting and the sudden, inexplicable attack by a random monster from the Game Master’s preferred Wandering Monster Table. Within the miasma, the Player Characters are free to wander wherever they like, explore as they like, and do as they like, and were it actually not for the effects of the Miasma, then determine what is going on would be relatively easy, as for the most part, the physical threats present in Midwich are not all that challenging.

Physically, The Seed is a vibrantly pink and white booklet with a separate cover, on the inside of which is the map of Midwich. The illustrations are a mix of the weird and the gruesome, whilst the map is large and easy to read. It needs a slight edit in places, but is overall quite a sturdy product, being done on heavy paper and card stock.

Like The Feast on Titanhead before it, The Seed is short and brutal, it being possible to play through the scenario and even survive in a single session. Unlike The Feast on Titanhead, the effect of failure in The Seed is disastrous, but not necessarily apocalyptic, however unless the Player Characters have a strong motive to investigate or a strong sense of altruism, the corrosive effects of the Miasma may be too strong for them, and so may drive them away rom Midwich, keeping them from investigating further. To that end, The Seed is need of some development upon the part of the Game Master to create hooks strong enough to motive the Player Characters, whether she is planning to run it as a one-shot or as part of a campaign.

Much like the earlier More Than Meets The Eye: A Short Adventure with Lots of Tentacles, Kelvin Green serves up another slice of ‘village as victim’ horror, this time weird Science Fiction horror for a profoundly pink encounter. The Seed is literally the seed of a session’s worth of weirdness and horror for the roleplaying game of the Game Master’s choice.