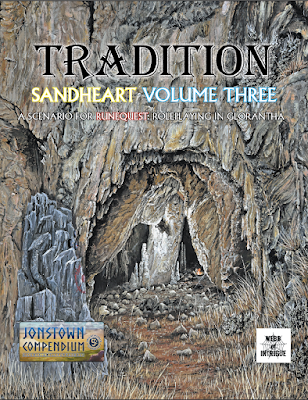 It is an eighty-nine page, full colour hardback.
Tradition: Sandheart Volume Three is well presented and decently written, with artwork that is full of character—the image of a VW Camper Rhino disgorging sixties-style hippies on the India hippie trail is worth the price of admission alone.

Who do you play?
The player characters are members of the Sun County militia based in Sandheart. Used to dealing with nomads and outsiders and oddities and agitators, the local militia serves as the dumping ground for any militia member who proves too difficult to deal with by the often xenophobic, misogynistic, repressive, and strict culture of both Sun County and the Sun County militia. It also accepts nomads and outsiders, foreigners and non-Yemalions, not necessarily as regular militia-men, but as ‘specials’, better capable of dealing with said foreigners and non-Yemalions.

What do you need?
Tradition: Sandheart Volume Three requires RuneQuest: Roleplaying in Glorantha. RuneQuest – Glorantha Bestiary might be useful.

What do you get?
Tradition: Sandheart Volume Three is not really a scenario, but more a campaign framework around which the earlier scenarios, Tales of the Sun County Militia: Sandheart Volume 1 and The Corn Dolls: Sandheart Volume 2 can take place, as well as other scenarios of the Game Master’s choice or devising. This is because it concerns events at one location, a location that by tradition—and if the Yelmalions do anything, it is by tradition—the militia must visit year after year, and perform the same ceremony each time. And each time, the ceremony is completed as instructed by the cult, and nothing happens. In fact, nobody in the militia knows why the task is carried out one year after the next, because nothing ever happens and why it was done the first place has been long forgotten. Only this time—no, only next time, and the time after that, it will be different, and perhaps the members of militia assigned the duty just might find out why the cult has been performing this ceremony for hundreds of years…
What this means is that if the scenario is played as is, it will not have the impact that playing it episodically will do. Essentially, being asked to return again and again to perform the ceremony at the Dark Watch Cave—without the benefit of a break in the narrative, signals to the Player Characters that their being at the cave is significant rather than the ordinary task it is initially intended to be. So, Tradition: Sandheart Volume Three is best played before, between, and after the events depicted in Tales of the Sun County Militia: Sandheart Volume 1 and The Corn Dolls: Sandheart Volume 2. The downside of this is that if you have already run either of those, then Tradition: Sandheart Volume Three takes more effort to implement. Another issue is one of what else to run between the parts of Tradition: Sandheart Volume Three. The setting and tone of the ‘Sandheart’ series is quite particular—and it is not one that is easily supported by the other scenarios available on the Jonstown Compendium. Advice to that purpose would have been useful. (Potential scenarios which would work include Jorthan’s Rescue Redux,* Rock’s Fall, and Blue Moon, White Moon.)
* Please note that for the purposes of transparency, I co-authored Jorthan’s Rescue Redux.
The Player Characters’ initial forays into the Dark Watch Cave will somewhat mundane, a simple task of lighting several braziers within its walls and then maintaining a vigil overnight. Here is a chance for them to explore the fullest extent of the cave and so educate themselves about its layout for when they return the next and subsequent years. However, the Dark Watch Cave has a deep, dark secret. It is home to a demon of darkness and deceit, one which is trying to escape its prison. Over the course of four tests—as the first four parts of Tradition: Sandheart Volume Three are known, the vigilance of the Player Characters will be tested again and again, as attempts to enter the cave and break their watch grow in their intensity and obviousness. In the early tests, they are actually quite amusing—and there is opportunity for some light-hearted roleplaying, but as the Player Characters return, they become vicious and ultimately spread to the wider area. In these later stages, the tests emphasises action and combat rather than roleplaying, but that reflects the threat which grows and grows over the course of Tradition: Sandheart Volume Three.
Ultimately, the likelihood is the Player Characters will fail and in order to defeat the darkness, the Player Characters will need to undertake a Hero Quest. Compared to the first part of the campaign framework, this is a radical change in pace, structure, and play style. It is very rigidly structured and both players and their characters—as well as the Game Master—need to be quite regimented in how they play through this. It presents some fantastic scenes, especially for Yelmalions as they fight against Darkness, and should they prevail, brings Tradition: Sandheart Volume Three—and if used in conjunction with Tales of the Sun County Militia: Sandheart Volume 1 and The Corn Dolls: Sandheart Volume 2—the ‘Sandheart’ campaign to a rousing climax.
In addition to a full description of Dark Watch Cave, Tradition: Sandheart Volume Three comes with three handouts, full stats for the NPCs and monsters, and multiple maps of the Dark Watch Cave. Some of the handouts are slightly lengthy and as the campaign framework progresses, it does grow in complexity and the need for increased preparation upon the part of the Game Master.