Last Night of the Busted Flushes 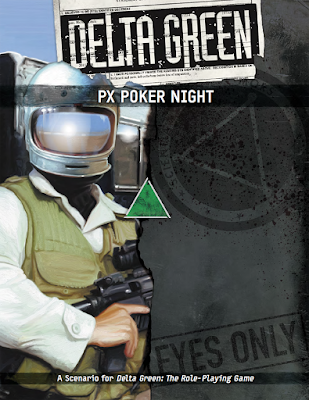 Delta Green: PX Poker Night is a scenario for use with Arc Dream Publishing’s Delta Green: The Role-Playing Game which can be played using the roleplaying game’s full rules or those from Delta Green: Need to Know. It is significant in that it was originally published in the late nineteen-nineties, and so is actually set before the events which saw Delta Green accepted back into the fold and before Delta Green became a roleplaying game of its own. It also served as the demonstration scenario for the setting, being basically a one-shot set in an isolated location on one singular night of terror.

Some twenty or so years on, Delta Green: PX Poker Night has been updated and refurbished as a scenario for Delta Green: The Role-Playing Game. It can still be run as a one-shot, but if any of the pregenerated Player Characters survive the strange encounter and the madness, they may go on to become Delta Green friendlies, even Delta Green agents if the conspiracy can improve the situation with their careers, and so have the potential to be roleplayed through the events of the millennium and beyond… Alternatively, Delta Green: PX Poker Night could be used as a flashback, as the re-examination of a cold ‘Night at the Opera’, or even as an origins scenario for a Delta Green Agent a la Control Group.

Delta Green: PX Poker Night takes place at Platte Air Force Base, a cemetery for both Air Force aeroplanes—the base is a boneyard for decommissioned aeroplanes, and air force careers. Here in the middle of nowhere, misfits, malcontents, and ne’er-do-wells serve out the remainder of their careers, all but avoiding the possibility of a dishonourable discharge. They have little to do bar maintain the base and perform guard duty, and little to look forward to except the weekly poker game—held at the base’s PX, a holdover from when Platte AFB was an army base—and the opportunity to take money off the base’s officers. All that will change on the night of Saturday, August 22nd, 1998.

On that evening an unmarked van is driven onto the base and parked at its far end. It sits there silently for hours, guarded by men armed with rifles and wearing strange metal helmets. The base commander says that they have permission to be there and their orders are correct. Then as the poker night begins, the van seems to hum, and the mood turns strange. The air force personnel grow disgruntled, then agitated, and worse, petty rivalries and miseries escalating into out and out violence as they suffer weird hallucinations. Then events really take a turn for the weird…

Delta Green: PX Poker Night is designed to be played by between three and six characters, the scenario including six pregenerated Air Force personnel. They include a diverse mix of men and women, some them of actual misfits and malcontents, most but not all of them at Platte AFB due to their own actions. However, there is a problem with the two women in the group. Not that they are African American, but rather that both are victims of misogyny within the Air Force. In story-telling terms, their backgrounds feel too similar and although they are different in terms of personality, perhaps another reason for one of being assigned to Platte AFB could have been given to make her less of a victim and more responsible for her own actions as the majority of the pre-generated male characters are.

Given that the scenario is designed as a one-shot and comes with pregenerated characters, it would also have been useful to have a briefing for each character, detailing in particular how each feels about the other five. This may not be necessary with every group playing PX Poker Night, but will definitely be useful for a convention game. That said, in addition to the character sheets for each of the six pregenerated characters, the scenario supports their insanity spiral with a set of effect cards which are designed to be handed out as the effects whatever the van brought onto the base degrades their mental stability.

Delta Green: PX Poker Night is primarily character and player driven. For the most part, they will be reacting to the events around them, a combination of weird hallucinations and the increasing unstable, then aggressive or panicked actions of their fellow servicemen, and there is plenty of roleplaying potential involved in that, though some players may find it to be too much of a grind. The scenario also presents the opportunity for the player to roleplay characters in the Delta Green setting who are not stalwart investigators, but both victims and malcontents. Ultimately, the scenario will drive them to investigate lest they be driven insane. However, whilst the scenario’s weird events escalate and its denouement is interesting, that denouement is not necessarily a satisfying one—especially if the scenario is run as a one shot. As a flashback or introduction to the setting of Delta Green, there may be more opportunity to explore the repercussions of Delta Green: PX Poker Night.

Physically, Delta Green: PX Poker Night is decently presented as you would expect for Delta Green: The Role-Playing Game. It includes good maps and a useful set of tables to help the Handler gauge the reactions of the NPCs.