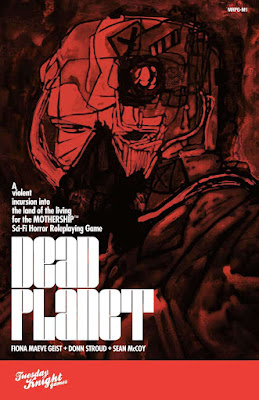 Dead Planet: A violent incursion into the land of the living for the MOTHERSHIP Sci-Fi Horror Roleplaying Game is many things. It is a lost ship to encounter and salvage and survive—and even steal. It is a means to create the layout of any starship you care to encounter. It is a moon to visit, a hellhole of auto-cannibalism, desperation, and caprinaephilia. It is a list of nightmares. It is a planetcrawl on a dead world including a bunker crawl five levels deep. It is a weird-arse incursion from another place, which might not or not be hell. It is all of these things and then it is one thing—a mini campaign in which the Player Characters, or crew of a starship, find themselves trapped around the dead planet of the title. Desperate to survive, desperate to get out, how far will the crew go in dealing with the degenerate survivors around the dead planet? How far will they go in investigating the dead planet in order to get out?

Published by Tuesday Knight Games, Dead Planet: A violent incursion into the land of the living for the MOTHERSHIP Sci-Fi Horror Roleplaying Game is the first supplement for MOTHERSHIP Sci-Fi Horror Roleplaying Game, which does Science Fiction horror and action. The action of Blue-Collar Science Fiction such as Outland, the horror Science Fiction of Alien, and the action and horror Science Fiction of Aliens. It works as both a companion and a campaign for MOTHERSHIP, but also as a source of scenarios for the roleplaying game. This is because it is designed in modular fashion built onto a framework. This framework is simple. The starship crewed by the Player Characters suffers a malfunction and is sucked into a star system at the heart of which is not a sun, but a dead planet upon which stands a Dead Gateway which spews dark, brooding energy from somewhere else into our universe. The crew is unlikely to discover this until later in the campaign, by which time they will have encountered innumerable other horrors and nightmares. With their ship’s jump drive engines malfunctioning and the ship itself damaged, the crew find themselves floating through a ships’ graveyard of derelicts. Could parts be found on these ships? How did they get here—was it just like their own ship? And where are their crews? Close by is a likely ship for exploration and a boarding party.

Beyond the cloud of derelict ships is a moon and this moon is a community of survivors. How this community has survived is horrifying, it having to degenerated into barbarism, to a point of potential collapse. Indeed, the arrival of the Player Characters is likely to drive the factions within the community to act and send it to a tipping point and beyond. Not everyone in the community welcomes their arrival, and even those that do, do so for a variety of reasons. However, in order to interact with the community, the Player Characters are probably going to have to commit a fairly vile act—and do so willingly. This may well be a step too far for some players, though it should be made clear that this act is not sexual in nature and will be by the Player Characters against themselves individually rather than against others. Nevertheless, it does involve a major a major taboo, and whilst that taboo has been presented and explored innumerable times onscreen, it is another matter to be confronted with it in as a personal a fashion as Dead Planet: A violent incursion into the land of the living for the MOTHERSHIP Sci-Fi Horror Roleplaying Game does.

Then at last, there is the Dead Planet itself. This is a mini-hex crawl atop a rocky plateau with multiple locations. Not just the source of the system’s issues, nightmares, and madness, but a swamp, a crashed ship, wrecked buildings, a giant quarry, and more. Most of these locations require relatively little exploration, only the deep bunker of the Red Tower does. Plumbing its depths may not seem the obvious course of action for some players and their characters, but it may contain one means of the Player Characters escaping the hold that the Dead Planet has over everyone. Certainly, the Warden—as the Game Master in Mothership is known—may want to lay the groundwork in terms of clues for the Player Characters to follow in working out how they are going to escape.

Taken all together, these parts constitute the mini-campaign that is Dead Planet: A violent incursion into the land of the living for the MOTHERSHIP Sci-Fi Horror Roleplaying Game. Separate these parts and the Warden has extra elements she can use in her own game. So, these include sets of tables for generating derelict ships and mapping them out, jump drive malfunctions, weapon and supply caches, colonists and survivors, luxuries and goods found in a vault, and nightmares. All of these can be used beyond the pages of Dead Planet, but so could the deck plans of the Alexis, an archaeological research vessel, the floor plans of the bunker, and so on. Not too often, and likely not necessarily if Dead Planet has been run.

Physically, Dead Planet: A violent incursion into the land of the living for the MOTHERSHIP Sci-Fi Horror Roleplaying Game is like MOTHERSHIP itself, a fantastic exercise in use of space and flavour of writing. However, the cost of this wealth of detail is that text is often crammed onto the pages and can be difficult to read in places. It also needs a slight edit. The maps are also good, though artwork is unlikely to be to everyone’s taste.